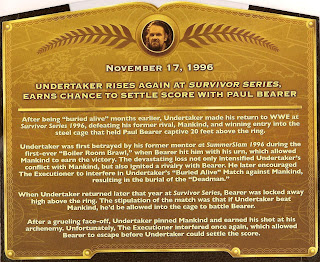 I picked Mattel's WWE Defining Moments as my favorite action figure line of 2011 and with good reason. It delivered detail on an epic scale, case-in-point, this Undertaker figure. It may not have been my figure of the year, but it's impressive nonetheless. If you missed out on him last year, don't fret because he along with his wavemate, Stone Cold Steve Austin, are readily available online and should pop up at Toys R Us once they clear out some wave 3 Triple H and Ricky Steamboat figures. 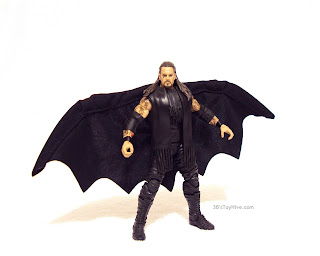 When I first saw the press photo for this figure, I was asked myself, "when the f*ck did Undertaker dress up as Batman?!" I, regrettably, never saw the 1996 Survivor Series pay-per-view, in which Taker wore this outfit during his entrance. I'll admit, watching Undertaker being most unimpressively lowered to the arena floor like a piñata doesn't do much to sell this figure. Instead, it's sold on the sheer ridiculousness of a character like Undertaker existing in something that is supposed to be a physical contest. That's the beauty of professional wrestling, it doesn't have to make sense, but it must be a spectacle to behold. I've already shared my appreciation of the cross-over potential of Undertaker figures, especially when they include these types of outlandish costumes. 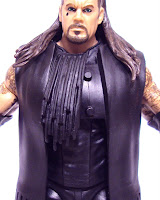 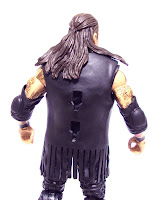 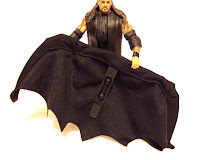 The wing-suite is basically two parts: the vest/harness and the wings themselves. The vest features molded frills around the bottom and on the center of the chest, concealing two pegs where the vest opens and closes for removal. The wings are made of cloth with a simple plastic frame stitched inside. Each side of the wings has a hinge I assume was integrated to allow the wings to be displayed on the figure while it's in the box. When fully extended the they have a twelve inch wingspan. There is a plastic piece in the center with two tabs that slot into the back of the vest allowing Undertaker to achieve his "flight" mode. 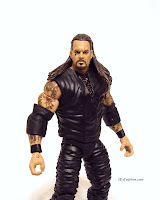 Once you remove Taker's ACME batsuit, you have a really great iteration of the Undertaker with his late '90s tunic-style ring attire. The tunic is a separate piece made of pliable plastic. It pegs down on the right side, under his arm, however removing it completely requires you to first remove Undertaker's head. 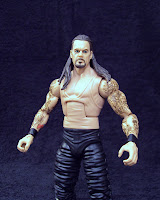 And just in case you're wondering, under the tunic is the same old Taker torso with sculpted (although, unpainted) tank top. The DM version offers us a brand-new head sculpt and lower body. The head features a stern Undertaker expression, much more involved than his first Elite release, but not as exxagerated as his later E8 figure.

The lower body features sculpted leather pants, just like he wore at SS'96. I think the design team went a bit overboard on the wrinkles, though. For leather pants, these sure are bunched up a lot. The boots are the same as we've seen on the Elite Takers and the elbow pads are the usual removable type. One (or two, rather) inconsistency with the figure are the gauntlets. At the event, Taker wore thick, leathery gauntlets. Mattel bypassed the creation of those pieces by simply painting them on. They just look like black wrist tape on the figure, which isn't too bad looking, although significantly shorter than the gauntlets appeared.

All the pieces that make up this Undertaker are molded in the necessary colors, which is pretty much black or his flesh tone. The paint is restricted to his head and arms. I didn't have any paint issues on my figure and evertying looked clean and sharp. 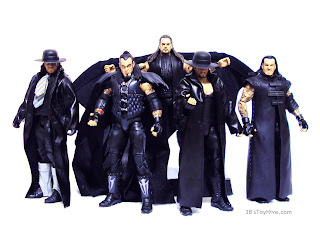 At $22.99, the "Defining Moments" line continues to be one of the most expensive action figure lines at retail. I don't know what the current standing is or what the future of the line holds since I haven't seen anything showcasing any waves past the current one (wave 5), but I do hope Mattel continues the line. There are still plenty of Superstars that would benefit from a DM treatment and with Elite figures inching closer to the $20 mark, it's not much of a stretch to grab a DM figure instead.

If you're a fan of Undertaker, this is an easy buy. If you're only a casual fan, there are enough new pieces here to make the purchse worthy. Either way, who wouldn't want a bat-Taker on their shelf?
Posted by 3B at 12:02 AM