Hello fellow toy fanatics! Today's review is our first of 2011 and we're kicking things off with one of the latest entries in Mattel's WWE Elite Collection. He's a true golden boy in the world of professional wrestling! Here is Goldust! 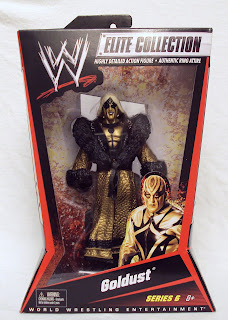 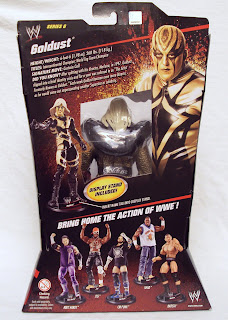 It's hard to believe Goldust is part of the Elite series and not the Legends, but the fact is he still performs in the WWE. Goldust is also the son of WWE and Pro-wrestling legend, Dusty Rhodes. Goldie's wrestled under the name of Dustin Rhodes, and his given surname of Runnels, among others, but is best known as the character "Goldust." I remember watching Goldust when he debuted in the then-WWF, he was nicknamed "the Bizarre One" and knew how to push buttons and get an intense crowd reaction through his highly suggestive and borderline homo-erotic mannerisms. Nowadays he's a consistent crowd favorite, but his controversial behavior has been toned down for the current, "PG" format the WWE has adopted.

Mattel perfectly captured Goldust's face with a trademark sneer. His effectively creepy facial expression makes him a standout in a crowd of blank-faced figures. You'll notice the back of his neck is not painted and while that may be accurate, there is something missing. Given the fact that Goldust is one of the few (possibly only) Superstar sporting a full body suit, Mattel pretty much had to give him a unique sculpt. However, unlike the suit worn by the real-life Goldust, the one on the figure is sculpted with a crew neck. Goldust's actual suit has a collar that comes up over his neck. The way it's sculpted makes me think they plan on reusing the torso for other wrestlers wearing full body suits (I don't know of any) or known for always wrestling with a T-shirt on. I don't know why Mattel decided to go that route since they use removable, cloth t-shirts for their figures, thus eliminating the need for a torso with a sculpted shirt.

The paint work on Goldust is well done. I can't say I remember this exact costume, but Goldie's one of those Superstars who rarely wears the same thing twice. The design on the costume is rather elaborate, but done mostly in black (commonplace for the Elite series) with a darker gold tone than you normally see on him. His name is clearly printed in silver lettering with a gold outline on his back. 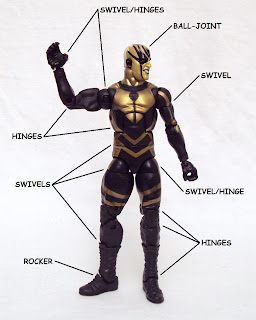 Goldust features the standard level of articulation for the Elite series. All points function correctly without interference from other body parts. This is tecnically a 2010 release, so I won't hound Mattel about the lack of double-hinged elbows. I did that enough last year with the hope that they would improve in 2011. I already know for a fact that they haven't, but we'll save the nagging for an upcoming review. 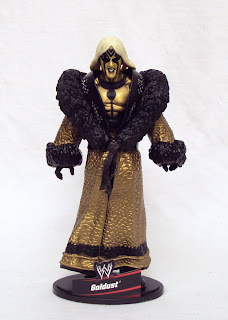 This is one wrestler who could easily fit into the "Entrance Greats" series, oh, wait, that line has been retired in favor of the "Defining Moments" deluxe line. Anyway, Goldust is known for always making a grand entrance and he received the right accessories to do that.

His wig is molded in it's platinum blond color and fits over his head similarly to the Iron Sheik's headdress. It's also sculpted in such a way that it sits on his head perfectly without being lifted by his coat. The coat is also a single molded piece of plastic much like the coat on Elite Series 1 Undertaker. The coat completely restricts the movement in Goldust's arms, so you can't pose him raising his arms or doing anything with his arms until you remove it. That aside, it's molded in black with gold paint added on and features his name stamped across the lower back. The coat fastens in the front with a thick peg that shouldn't break easily. Goldust also features the WWE logo stand and cardboard name tag. 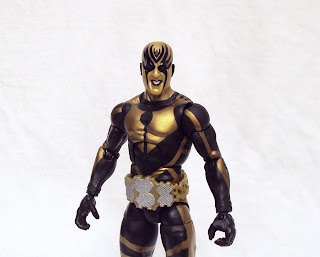 Goldust is another nice entry in the line, although I would have liked to see a few changes. The lack of a collar on his suit makes him look "off" and it would have been a nice touch to sculpt the zipper that runs up the center of his costume. The belt pictured above comes from the Entrance Greats "Million Dollar Man" figure. I figured I'd share these pictures since Goldust was recently involved in a storyline where he stole the Million Dollar title from DiBiase Jr. I would like to eventually see Goldust as a Legends release and hopefully they'll add a cloth coat with flocking around the collar. Until then, you'll just have to deal with this release.
Posted by 3B at 12:05 AM