Today we have some more classic tag team awesomeness! The '80s was a wondrous decade for professional wrestling, giving us some outlandish Superstars with bizarre attires.

Demolition is a perfect example of what the '80s had to offer. Let's take a look at their first entry in Mattel's WWE Legends. 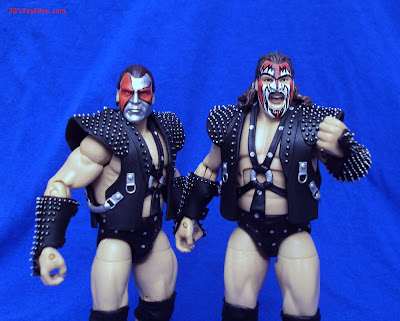 Demolition's action figure debut comes to us individually packaged in series 4. Both figures are built using the same torso (previously seen on Nikolai Volkoff and "Hacksaw" Jim Duggan), but feature different legs. The different legs create a height difference between the two characters and is the only area of these figures that have created a bit of controversy. You see, the real-life Ax and Smash have a roughly 1" height difference. Now notice Smash's figure is a bit taller than Ax, therein lies the problem. Ax should actually be the taller of the two figures.

I have a couple of theories on what may have happened. First, I believe Mattel fully intended to have the height difference, but somehow the lower body was switched around and Smash ended up taller. Or, they confused Smash with Crush (a later member of Demolition), who was 6'6", explaining the not only longer, but thicker thighs on Smash. Anyway, in an attempt for improved accuracy, I switched the heads and left arms (because Smash has a tattoo on his) of the figures and now my Ax is the taller of the two. For the sake of the review, pictures of the modified figures are displayed towards the end of the post.

Ax's face looks accurate, but is another figure suffering from "bland face." No expression other than "here I am." I don't feel this look works for a Demolition figure. What bothers me most is that Ax's image on the package is very expressive, but I guess Mattel limits how many figures have open mouths in each wave. The paint on his face is done beautifully, with crisp lines and no blurring of the various colors. The sculpting on the hair is excellent and captures his look well.

I'm guessing the open mouth policy is 50/50 for each wave. Here we have Smash with a very expressive look sculpted on his face, matching his card art perfectly. Smash's hair and head are one piece, yet they've painted his bald-spot on. I think it would have looked better if they had followed the technique used on Jake "The Snake" Roberts' figure, having the hair as a separate rubber piece that allowed his scalp to show through. The paint work on Smash's face is also very well done. He has significantly more detail with many more intricate lines than Ax and it's all recreated wonderfully here.

Like I mentioned before, both Demolition figures share the same upper body. That includes the arms which feature wrist tape that is painted in black. Smash features an eagle tattoo on his upper left arm and it's finely detailed and cleanly applied. The harness on their costumes is made of a separate rubber piece that allows the torso to swivel at the waist and bend at the chest. The studs on the shorts are painted on and all appear crisply applied. While the legs are different for Ax and Smash, they share the same knee pads and boots. The boots are new to the line and feature plenty of detail with straps and studs sculpted on. The studs are painted in silver just like on their tights.

Articulation is the standard for the Legends line. A problem that I often encounter with this and the Elite Collection, but rarely mention, is the hip joint. It can come stuck and make it difficult to raise the legs. I haven't come up with a real fix because I either display the figures on my shelf or store them in a plastic bin. This problem is evident on Smash's figure. Aside from that all points work well and you can always check most of my other Legends/Elite reviews for a breakdown of the various points. Given the number of photos for this review, I didn't have time to draw up the usual articulation diagram. Sorry.

Demolition was always known for wearing intimidating attire when heading to the ring. This featured studded vests, gauntlets and leather covered hockey masks. Both figures feature the same exact entrance accessories. The only difference is the shape of the masks; Smash's mask is a little longer than Ax' due to his stretched out face. All the accessories are exceptionally done. The detail on these is very impressive. The vests are molded in a soft rubber, which is very flexible and does not hinder movement the way Undertaker's coat or Finlay's jacket do. The gauntlets are also made of the same material as the vests. The vests and gauntlets are covered with studs which have ALL been painted in silver. I was particularly impressed by that since the Road Warriors had several studs/spikes on their armor that were NOT painted.

The gauntlets feature "peg in hole" closures at each end, keeping them in place. I recommend you handle these with care because they are made of soft rubber and I can see them tearing easily if you're too rough with them. The gauntlets feature a small flap that cover the hands, of course it would be damn near impossible to have a ring for the fingers to keep them in place like the real-life gauntlets had, but I think they still achieve the right look. 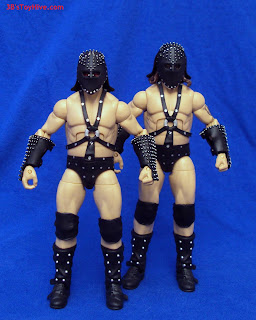 Hey, weren't these guys in The Beastmaster? I know many fans have mentioned Mad Max: Beyond Thunderdome Lord Humongous from The Road Warrior [thanks, LJ - 3B], but I remember Beastmaster more vividly. Either way, Demolition always had the "S&M"/bondage/dungeon master look going on. 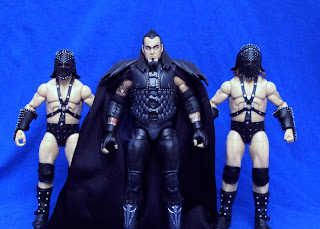 Every dark lord of chaos needs dungeon masters! I wanted to get a group shot including the Road Warriors, but things were a bit hectic this week. I hope to have those pics up soon. And as for the revised Demolition... 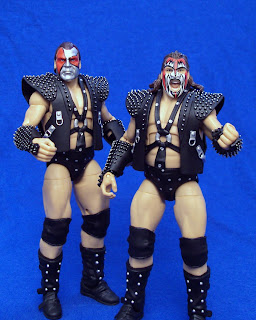 Still seems a bit off because Ax shouldn't be that much taller than Smash, but it works a bit better for me. Anyway, I'm glad to have Demolition in hand as they were a favorite of mine when I was a wee lad. Hopefully we'll be able to add Crush to the mix soon and have a complete Demolition team! 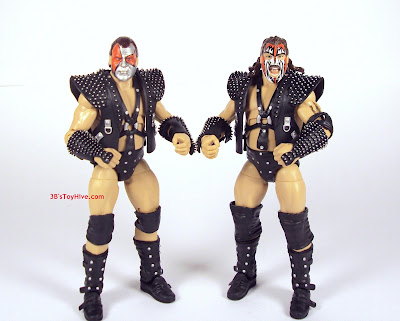 Recently I kept running across pics of Ax & Smash online and it seemed obvious that, for whatever reason, Smash is just a hair taller than Ax in some pics, but you can argue that they were the same height. So I decided it was time for some tinkering to make these guys more accurate. To achieve that I bought a second Ax (the smaller of the two Demo figures) and replaced the head and left arm with Smash's. 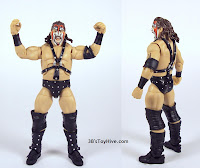 In researching old photos, I also noticed that the square knee pads were wrong for Smash. He used much larger, bulkier pads and even had his knees wrapped with white tape underneath his pads. I didn't take the time to paint his knees, but I did swap out the knee pads with the larger, rectangular type and I think he looks way better now.

Smash also wore a blue knee brace under his right knee pad, but I'm not too bothered about adding that to the figure... for now. I also gave him an elbow pad (taken from Sgt. Slaughter) to wear just above his left elbow. In later years he wore the solid type pad, especially when he tagged with Crush, but I figured I could always swap it out if we ever get the big Hawaiian in the line. 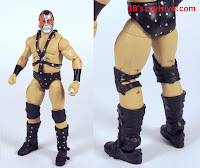 Ax didn't require any real modifications, but I did notice that he sometimes wore two different types of knee pads, so I swapped out his left square pad for the smaller, rounded type with the open back. Just to change him up a bit and bring him a bit closer to Demolition's early appearances.

The only things missing now are the classic Tag Team title belts, which I'll unfortunately be forced to buy the Brain Busters on Matty Collector to obtain and Demo Crush. Speaking of Crush, I'm looking into using the original Smash body to create a custom version of the big man. I have a few ideas and have already tested out some leg configurations to give him larger boots (and added height), but nothing final, yet. Stay tuned!