What can I say about professional wrestling in the 1980's that I haven't said before? It was a wild and wacky and boatloads better than it is today. Memorable feuds and characters that really stood out from one another. Further proving that the 1980's had no shortage of gimmicky, fun characters, here's Hillbilly Jim who was billed as a hillbilly from Mud Lick, KY. Here's a look at his first release in Mattel's historical WWE Legends line. 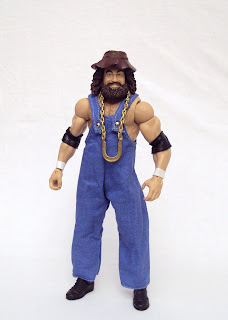 To play up his "hillbilly" gimmick, Jim wore overalls and a dirty old hat, both of which are recreated beautifully in action figure form. The hat is molded in plastic, with the inside, or underside, made to fit perfectly onto Jim's hair. The overalls are made of cloth and removable thanks to velcro pieces at the ends of each brace. These two items make up Jim's accessories along with his lucky horse shoe on a chain. The chain and horse shoe are molded in one piece. 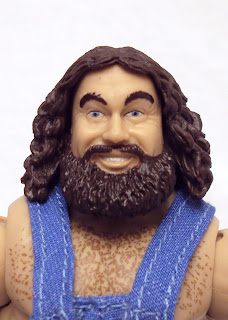 Hillbilly Jim was known for being a fun character and he was always smiling when coming down to the ring. The figure does a great job of capturing his cheery visage and comes through nicely even with his Grizzly Adams-style beard. There is plenty of detail sculpted right into the hair and beard and they both combine to look fantastic on the figure. 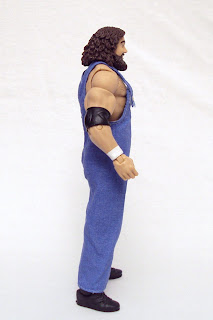 Jim is a large man, standing at 6'7", and was on the taller side of the roster. The figure recreates his size excellently with appropriately proportioned body parts. He's taller than most of Mattel's WWE figures, yet just a fraction shorter than Kane or Undertaker, making him the correct size, scale-wise.

The figure stays clear of an overly toned body, but still muscular enough to look very impressive. The upper torso seems to be the same as Kane's and works well for HJ. 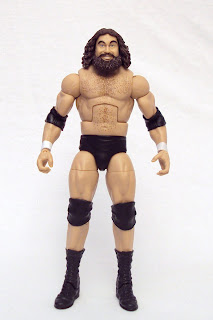 Once you remove Jim's trademark overalls, you'll find wrestling attire underneath. I don't remember seeing HJ wrestle out of his overalls, so I don't know how accurate this is, but I'm glad to see Mattel didn't cheap-out and added knee pads to this dude. Also, you get to see his fantastic body hair applications. I'm glad these are simply painted on, because flocking would just be creepy. While his upper body may be borrowed from the Kane sculpt, I'm pretty sure his lower body, mainly the legs, are brand new to the line, because we haven't seen bare legs this size in Legends or Elite, as far as I can remember.

In all, another solid release from Mattel in the ever-expanding Legends line. I'm pleased with how he turned out and glad to see the attention to detail has not diminished, yet. Series 5 was supposedly released in March, however, I haven't come across any in "the wild", yet, so keep an eye out for those. 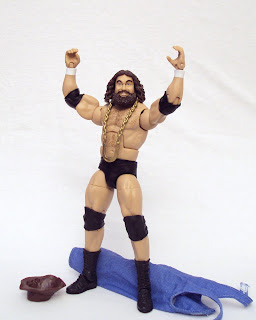