Mattel's WWE Legends continues to deliver fantastic versions of many of my favorite wrestlers from the '80s and '90s. But it's not always about the good guys you cheered for in your youth, it's also about the heels you hated and booed with passion. It takes a special quality to bring out those emotions in pro-wrestling fans and two of all-time best bad guys are presented in the two-pack we're reviewing today. 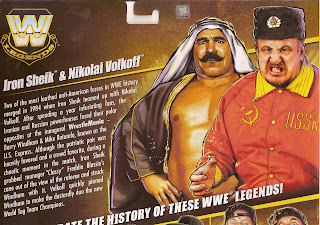 The WWE Legends two-packs are exclusive to Toys R Us. This is the second set I purchase and I was a bit hesitant at first because I already had the single Iron Sheik figure from series 2. But Nikolai Volfoff was definitely a figure I wanted to add to my collection, so when TRU put these on sale the week of Christmas, I took advantage and picked them up.

The Iron Sheik is mostly identical to his single release, except for the lower body. He features the exact same head sculpt as the previous figure. Volkoff is captured with a great snarling expression and check out the detail on the back of his head (above, right). I love the way they sculpted it with all the flesh bunched up, it's easily one of the best head sculpts in the line.

I won't dwell on the Iron Sheik's sculpt too much since he's mostly the same as the previous release (reviewed here). I will say that I understand why he wore the short pants later on.

The paint on Sheiky is well done with nice little details like the camel on his hip and boots and the sword on the opposite side of his boots. The paint for his socks is also clean and sharp. 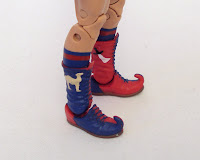 I can't get enough of those boots! They're too hilarious to ignore. I wonder how much it would cost to buy a pair of these. Imagine the look on your boss' face if you were to show up for work in these! The paint is once again very well done and it's especially impressive considering the two-tone design.

This is the only set from Toys R Us' WWE Legends Two-packs series that features two different torso sculpts on the figures (the Bushwhackers and Roddy Piper/Bob Orton share torsos, respectively). While the Sheik reuses the burly man torso from his previous release, Nikolai is sporting a new portlier torso, yet still toned. This torso would later appear on Series 3 figure "Hacksaw" Jim Duggan and Series 4 figures, Demolition. He uses the same arms as the Sheik, but luckily received thicker thighs.

His shorts are molded in red with a blue strip painted down each side. He's also sporting the small knee pads, molded in red. I don't know if it was an '80s thing, but many wrestlers liked having their socks stick out above their boots (including Iron Sheik and the aforementioned Piper & Orton). Nikolai has red and white stripes cleanly painted above his boots. The boots are molded in maroon and later embellished with white paint for the laces and soles. 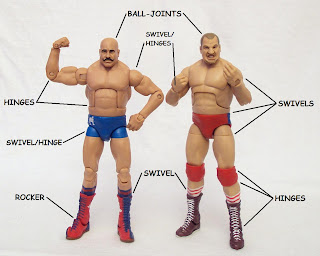 Both figures feature the same articulation points, just like the rest of the line. Everything works well considering the bulky proportions of pro-wrestlers and I'd say this version of Iron Sheik has a bit more range thanks to the slimmer legs. 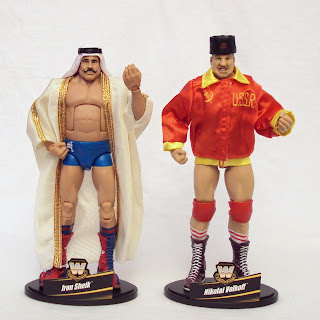 The set features display stands and name tags for each Superstar. While it's nice that Mattel tried to add "a little something" for collectors, they are kind of redundant. Obviously, you know who these figures are, otherwise you wouldn't have bought them. The stands and tags are of course no longer included, beginning with Legends series 4 and Elite series 7. The true accessories are the entrance attire pieces worn by each grappler. Another advantage this set has over their series-mates. 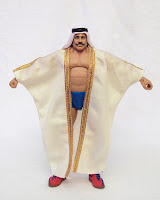 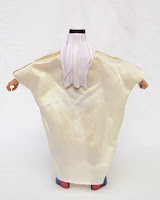 Iron Sheik once again features his keffiyeh and robe, the difference being the colors. This time around, the keffiyeh is molded in white with a black band painted around the top. His robe is made of a silky white cloth, still with a gold trim.

Volkoff includes his trademark russian winter hat, or ushanka, which is molded in black and features a tampographed red star and leaves on the front. His other accessory is the red "U.S.S.R." jacket he wore to the ring. It's made of a nylon or similar type material with the gold parts stitched on. The jacket opens on the front, just like a real jacket and closes with Velcro. I really dig the detail on the jacket and it looks great on display.

In all this is a great set and I'm happy I was able to add it to my collection while saving a few dollars (about $8 off the original price). I thought I wouldn't like having another Iron Sheik figure so soon into the line, but it's another great rendition of the wrestler and opens up my display options. Volkoff turned out fantastically and really sets a precedent for what Mattel can achieve with their face sculpts. These don't seem to be flying off the shelves, they debuted just after the single series 2 figures and before series 3, yet you can still find all three sets fairly easily. I hope they continue the two-pack series because while you may end up with a set like the Bushwhackers who only included ballcaps, they also featured a lot of new tooling. And it's a great way to release classic tag teams! Maybe we'll see "Legion of Doom" versions of Hawk and Animal in a future series and not have to worry about tracking down each figure separately. 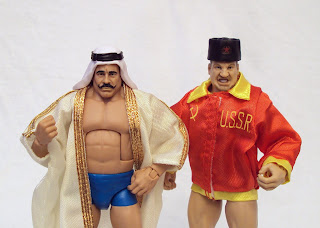