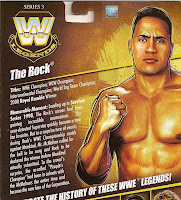 The Rock finally arrives in Mattel's fantastic WWE Legends line and unlike his previous "Entrance Greats" release, this version has the articulation collectors want! And wanted he is because he's been the hardest "Legends" figure to find at retail since the line began last summer. I found my figure at a K-mart about 15 miles from my home a week before Christmas. Let's see if he's worth the hunt! 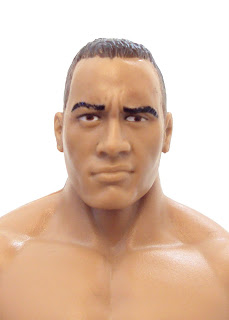 This version of the Rock follows him closer to the end of his career, but before going bald. You'll notice the much shorter, pointy sideburns he's sporting here. He also features a stern expression on his face as opposed to the non-chalant, exaggeratedly raised eyebrow look on the Entrance Greats release.

The Rock shares his torso with other Legends figures like Stone Cold Steve Austin and Road Warrior Hawk. It's a good fit for him because it's toned, but not overly toned like the Triple H/Batista torso. Though his thighs may seem thicker than those on Stone Cold, they're actually the same pieces. The real difference is in the lower leg pieces, which are a bit shorter to accommodate Rocky's taller boots. His elbow and knee pads are all separate pieces, molded in black and can be removed relatively easy, especially the elbow pads which are a requisite for any Rock figure.

The boots again are in the Rock's unique style with an extended portion that fits over his calves. Due to the top ring, the swivel on the boot section is a bit fussy, but you CAN get it to rotate around. The boots are molded in black plastic and don't feature any type of paint applications. I hope on future refreshes of the Rock Mattel adds a glossy black finish to his boots. That would make them completely authentic to his real-life gear. 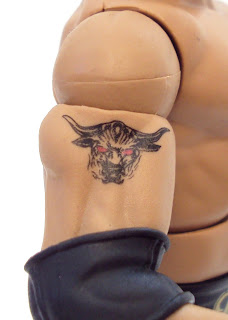 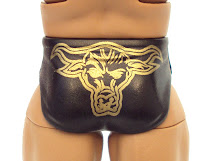 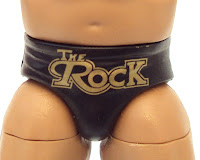 There's very minimal paint on the Rock aside from his hair and facial features. Even the paint on his tights and arm tattoo is simplistic. "The Rock" and "Brahma Bull" logos on his tights are both printed in gold paint and are sharply done. The bull tattoo on his right arm is printed neatly in black and features red paint for the eyes. 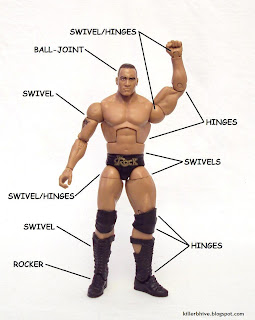 The articulation points on the Rock are what we've come to expect for the line. He's actually a 2010 release, so I'm not going to mention those missing points I'm always going on about.

Dwayne is packaged with a black WWE display stand and "Legends" name tag, the latter of which being damn near redundant because everyone knows who "The Rock" is. His true accessories are his gold-rimmed sunglasses and his cloth t-shirt. I'm not a fan of the slogan and would have preferred his bull logo or "Just Bring It" phrase on the shirt instead. The shirt is made of cloth with a Velcro strip on the back for easy removal.

Here the Rock is sporting the track suit featured with the Entrance Greats figure. If only the EG line would have added the same level or articulation the Elite and Legends lines feature, we wouldn't need to buy a second Rock figure. And I prefer the track suit to the "Layeth..." t-shirt.

Given the choice to buy the Legends and Entrance Greats Rock at the same time, I'd have to go with the Legends Rock because of the articulation and price. I don't think it makes a difference to most WWE collectors because it's hard to find either figure anywhere. The Rock's a popular WWE Superstar, even now, years after leaving the world of professional wrestling. His Legends release should be a no-brainer for any fan. 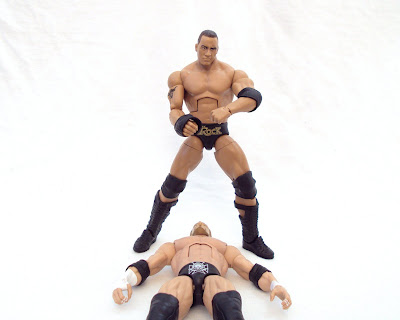