DC Comics' Blackest Night storyline has come and gone, but we can still enjoy great figures from the super maxi-series! Mattel's just starting to tap into the depth of characters involved in the series, but DC Direct has been churning them out almost before the first issue. Today we're looking at the story's big bad, the Black Lantern himself, Nekron! 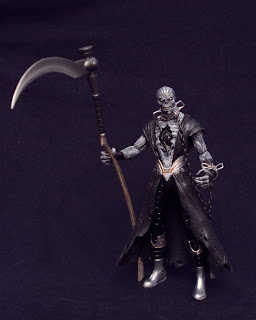 I have not read Blackest Night, yet, and believe me I'm more disappointed in myself than anyone else can be. However, I know that Nekron is basically the guy behind the curtain, screwing things up for everybody. Nekron is brought to us in the way only DC Direct can deliver, with exceptional sculpting and paintwork. 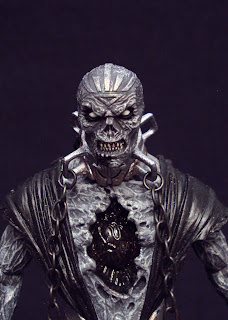 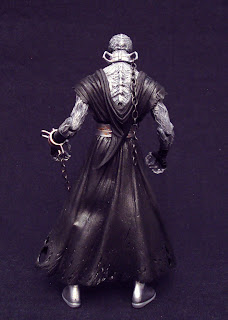 Nekron's "skin" is highly detailed, making him look like he's been decomposing for years, maybe decades. All the bare areas feature sculpting with a deep, rough texture. There seems to be a transparent plastic used inside his chest for his (still beating?) heart. There are separate plastic pieces added to the figure like his collar, the cuff on his left arm and the chains. The collar features three chains: one medium-length chain hanging from the back, then two of various lengths hanging from the front, the longest of the three connects to the cuff on his left arm. 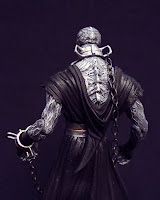 His costume features rubber elements for the "cloth" sections. It's worth noting that Nekron's robe features a hood hanging off the back. Unfortunately, you can't put it over his head, but it does hang apart from his costume. As if the magnificent sculpt wasn't enough, the paint on the figure is top notch. Nekron's received a combination of washes and dry-brushing to enhance the look of his decomposed body. The shackles and other "metal" parts of his costume also receive great details making them look rusted. 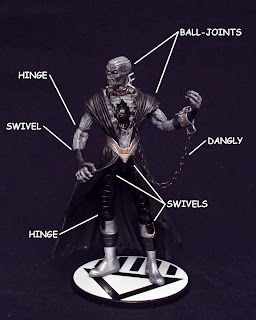 DCD has added several points to manipulate on Nekron. The diagram breaks down the various areas and most work beautifully. The range on his right shoulder isn't as great as that of the left's, but you can achieve what I consider the "necessary" poses for the character. I don't know, maybe you want a Nekron that can do handstands, but I think he's fine with what he has. The only issue I encountered was the left calf swivel, which seems to have a stuck peg. I can rotate the leg, but it feels as though I'm tearing the peg, so I haven't pushed it anymore. That may just be specific to my figure, but it's something to watch out for. 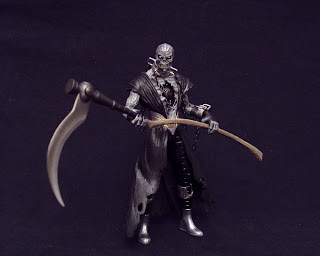 Like most of DC Direct's figures (and just like the rest of the Blackest Night series), Nekron is packaged with a display base (pictured in the articulation diagram above). It features Nekron's preferred lantern faction's logo and one peg to lock him into place sculpted on the top. The base is molded in transparent black plastic with white paint making out the logo. His true accessory is his black lantern/scythe weapon. The scythe features a curved staff sculpted to look like wood with a straight, wrapped handle. 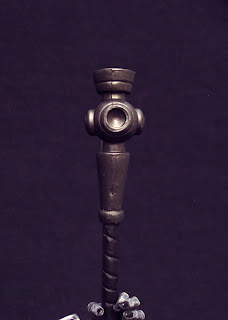 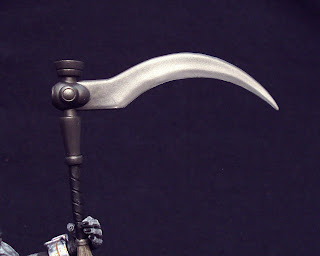 The head of the scythe is molded into a black lantern power battery, with the blade emerging from one of the lantern's faces. The paint is once again phenomenal, used effectively to bring out the detail of the wood grain, the black wrap and metal elements of the scythe. A terrifying weapon for a terrifying villain. 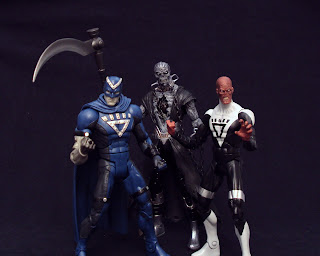 Now, let's get to the nitty gritty. How does Nekron match-up with Mattel's DC Universe Classics? I'd say pretty damn well. He's not as tall as the usual DC Direct offering, making him the ideal size for displaying alongside your DCUC figures. Thanks to the release of Black Hand and Amon Abin Sur in the DCUC spin-off series, Green Lantern Classics, the Black Lanterns can now have a little corner of their own in the DCUC display. 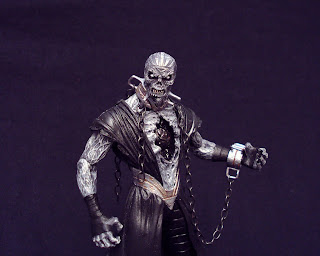 As you may know, Nekron was the winner of the last DCUC fan poll hosted by ToyFare (R.I.P.) where fans were able to vote for an upcoming "Collect and Connect" figure. The Four Horsemen definitely have their work cut out for them if they want to deliver a Nekron C&C that will motivate collectors to buy six figures in order to complete him. Considering the already high (and still climbing) cost of DCUC figures, that's a tall order. Personally, I'm glad I found this version of Nekron because while I was able to snag GLC wave 1 off of TRU.com for $14.99 (plus tax) apiece, the price has already gone up to $17.99 each. I'm not planning on completing Bane (C&C for DCUC wave 16), but Stel (GLC wave 2) has suckered me in.
Posted by 3B at 6:25 PM