When I started up Killer B Hive in May of 2010, one of the first figures I reviewed was also one of the first figures I purchased from Mattel's then-debuting WWE Elite Collection. That figure was the Undertaker. Looking back at that review now, I'm not happy with the handful of pictures I took and to correct that we're taking another look at Taker in a new edition of Stinger Shots! 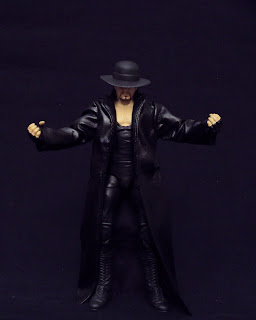 If you own this figure or read my review, you know that the included coat is very restrictive and does not allow for much posing. I have since replaced the coat on my figure with the one included with Undertaker's "WWE Entrance Greats" figure. 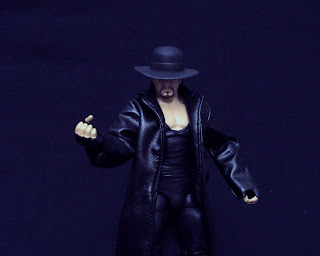 It's made of a faux-leather material that looks great and moves beautifully. 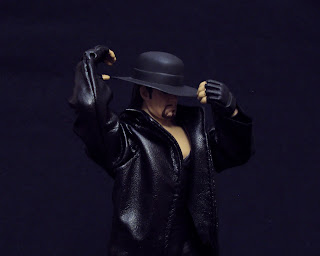 You can even recreate this trademark pose from the Undertaker's entrance. 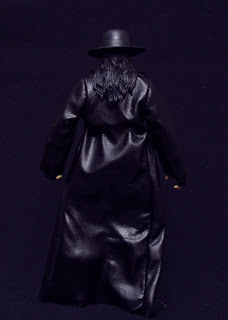 The coat is very long and even drags a bit, so I decided to trim it with a pair of scissors. 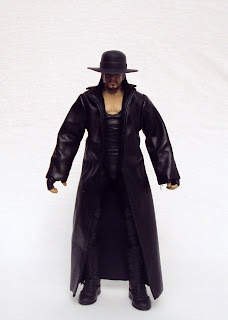 I think the length is much better now. 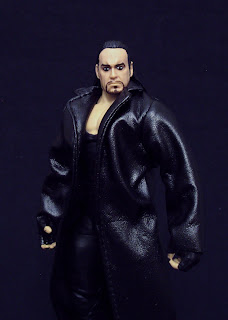 The cloth coat is thicker than the original rubber one, but still tucks in nicely beneath Taker's long hair, without tilting his head forward. 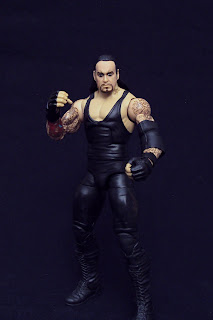 The Undertaker is sporting his usual tank top and wrestling tights under the coat. 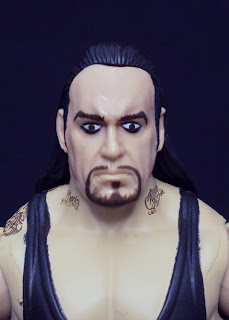 At this point, Taker is one of the few figures in Mattel's WWE lines that only has one head sculpt. Well, that's not completely accurate because the Entrance Greats and "Ministry of Darkness" figures have different heads, but it's completely different. While many Superstars have received multiple heads in the current look, but with different expressions. That will soon be corrected as the Elite series 8 Undertaker will feature a new head scan with a snarling Deadman.

While tattoos are nothing new to the world of action figures, I applaud Mattel in their continued dedication to adding as much detail as possible to the often very intricate artwork many WWE Superstars have on their bodies.

The Undertaker is easily one of the most heavily tattooed wrestlers on the planet. First off, both of the Taker's arms are covered in tattoos... on both sides! His right arm starts off with a bearded man on his upper shoulder, with flames spreading up onto his collar.

Below that are various skulls, faces, words in scrolls and other objects I can't make out clearly.

The inside of his forearm features a man in red hooded robe sitting in skull-crowned chair, writing with feathered pen. I can only assume it's the "mad monk," Rasputin, as that would tie-in with the Undertaker's occult sensibilities. It's understandable to have significantly less detail on certian tattoos. Even though these figures are about 7" tall, it's still a relatively small space to include such intricate designs.

His left arm is just as populated with body art as the right arm. It's hard to make out some of the images because of the size, but it looks like his upper arm recreates a landscape of some sort. Possibly a city skyline towards the top edge. The maelstrom of pictures continues down and around the arm, with more skulls on the forearms. Given that the Undertaker wears gloves, albeit fingerless, I'm left to wonder if his hands also feature tattoos.

Since the Undertaker's wrestling attire doesn't change much, Mattel reuses the same sculpt. However, they do add new graphics to his tights with subsequent releases. These pants feature two different designs on each of his thighs. His left leg has a demon skull painted in a coppery red color. The application is clean and you can easily make out a lot of the smaller details like the eyes and teeth. The right leg is sporting a custom rosary with a skull and Taker's "T" logo at the very end of the chain. It's nicely detailed and the application is crisp. 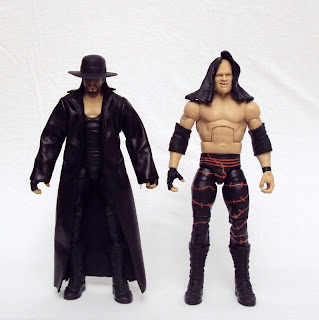 Kane, like the Undertaker is built on a much larger buck than the average Elite figure. These two "Brothers of Destruction" appropriately tower over most of the Superstars in the line. While I really ended up liking this Kane figure, I can't wait for Mattel to release a version in his original attire. Ideally with a removable mask! 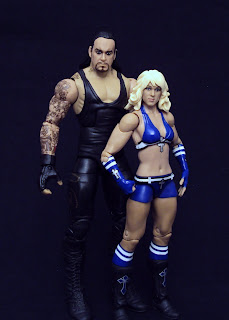 Mattel was nice enough to release the ultimate accessory for the Undertaker: current WWE Diva, and Taker's real-life wife, Michelle McCool. Don't they make a cute couple? Given the number of crosses McCool is sporting on her costume, you'd think Taker wasn't her type, but as they say, "opposites attract." 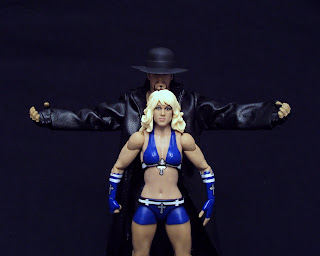