I finally got around to purchasing a TNA Wrestling figure and here it is for review! TNA (short for "Total Nonstop Action") is viewed as more of an upstart promotion, although they've been around for nearly ten years. They would like to think of themselves as the new "ECW", but that's not the case. TNA has produced action figures before with different companies, but currently have a contract with former longtime WWE toy manufacturer, Jakks Pacific. Let's take a look at Shark Boy! 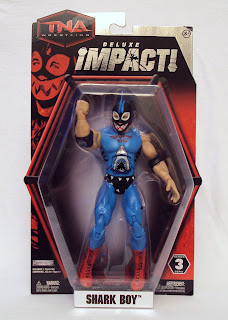 The figure arrives in a simple blister card with the bubble molded in a hexagonal shape just like the wrestling ring imprinted on the card, reminiscent of the companies former battle stage (TNA used a six-sided ring for several years before Hulk Hogan and Eric Bischoff joined the company and started screwing around with things). The back of the card serves solely as an advertisement for the rest of the figures in the wave with absolutely no biographical information on Shark Boy. 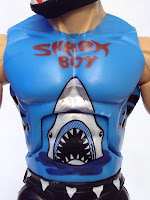 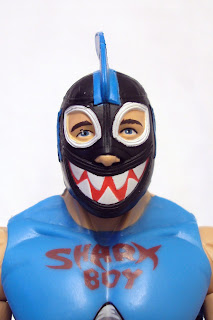 Shark Boy's head is sculpted with his mask on and has several details, like his head fin, and many seams around the mask. I'm not sure what color the head is cast in, but the visible flesh is all painted on. Something that seems to plague many of Jakks Pacific's figures is "big head syndrome" and Shark Boy is definitely suffering from BHS.

The name "Shark Boy" is written across the chest so opponents and fans could properly identify the wrestler in the event they couldn't tell by the shark mask and logos. This is accurate to his real-life wrestling attire and the lettering is painted clearly. He also has a shark rising out of the water "Jaws"-style illustrated below his monikered chest and abdomen. You need to shift the chest into a certain position to have the shark's nose line up with the rest of the body, but that's to be expected with any images printed across two body parts that connect at a joint. 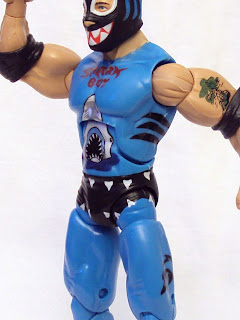 Most Jakks TNA figures (like their old WWE figures) are built around the same body, saving most of the uniqueness for the held sculpts, as is appropriate. However, reusing the same body creates several undesired effects, the most annoying of which being scale. All the figures in the line are basically the exact same size. Regardless of whether the wrestler is short and skinny, or tall and bulky. The figures end up the same height with similar builds, in many cases identical builds. Another point of contention is the bulbous proportions Jakks uses for their wrestling figures. Especially the size of the arms. They look comically enormous! I understand these are action figures and some exaggeration is to be expected, but for toys based on real-life people, these are so far over the top they're in the stratosphere. This really hinders Shark Boy's figure because he's not bulky at all, his build is fairly average. I think this could easily be corrected because the torso and legs aren't too excessive, but the combination of the huge head and arms makes the figure look too cartoony. I think that says a lot considering his attire. 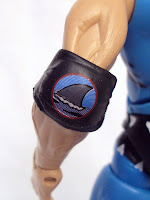 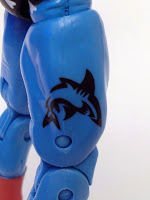 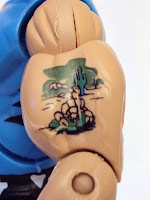 Shark Boy's elbow pads are molded in soft rubber and are removable. Each pad features an image of a dorsal fin sticking out of the water. They're a bit loose and will slip down his forearms if you extend the arms downward. Keeping both arms bent at the elbow insure the pads stay in place. There's a picture of a scorpion with a desert background tattooed on his left bicep. It's kind of cartoonish, but since I haven't seen the actual tattoo on his arm, it may be accurate for all I know. Each thigh is adorned with a swimming shark logo. It's a very basic, but effective, design printed in black. 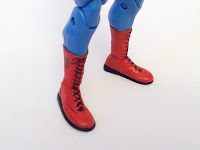 Sharky's boots are part of his lower legs and are actually molded in the same color, then painted red with black for the laces and soles. The laces are sculpted on the boots. 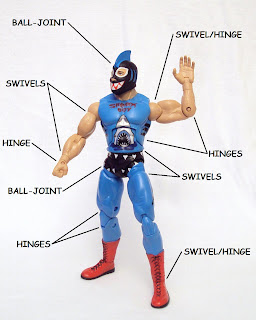 The articulation is sufficient on Shark Boy, although not as diverse as the model on JP's UFC figures. Everything works fine and moves fluidly without any loose or stuck joints. This is the "deluxe" line of action figures from TNA, so given the price point, it's not bad at all. 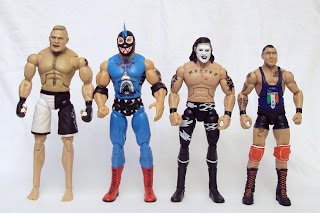 Here's a comparison with other "combat sports" figures, from left to right: Brock Lesnar (UFC Deluxe, also by Jakks Pacific), Shark Boy, Charly Malice (Playmates' Lucha Libre USA: Masked Warriors) and Santino Marella (WWE Elite Collection by Mattel). As you can see Shark Boy's arms look MASSIVE, even next to Lesnar from another of Jakks' licenses. And I thought some of the sculpting on the UFC figures was overdone...

I'm diggin the price on these. At roughly ten bucks, they're in direct competition with Mattel's inferiorly articulated "Basic" series. The downside to the Deluxe Impact! series is that not many figures receive any accessories, like Shark Boy (I wouldn't call his elbow pads accessories, BTW). I would also like to point out that there are a couple of other TNA lines out there, one being sold at convenience stores like Walgreens and sell for about $7. These seem to be in the same scale and even feature similar packaging, however, they have a lot less articulation, just like the Mattel's Basic line.

I know there are many fans of Jakks' action figures, from their previous WWE lines to the current TNA and UFC figures, however, I'm not a fan of their figures. I think these figures are perfect for kids who want to smash them together in a ring, but collectors are left wanting better detail. The extreme proportions were fine in the '90s, but considering the improvements in action figure manufacturing, Jakks should strive for more realism. I know that's difficult to fathom considering it's professional wrestling, but the figures are based on real-life people. Using Shark Boy as an example, JP simply needs to resize the head and arms, while toning down the musculature on the arms, too. That would greatly improve the authenticity of these figures and make it a great collector line.
Posted by 3B at 1:45 PM