There are only a few clowns I actually like: The Joker, Krusty the clown... that clown on Bozo cups (although, that one has more to do with the ice cream than the clown himself). And that's pretty much it. That's not hard to believe, not many people like clowns, especially scary ones, but every now and then you get one, like the Joker, that's just the perfect amount of... twisted. 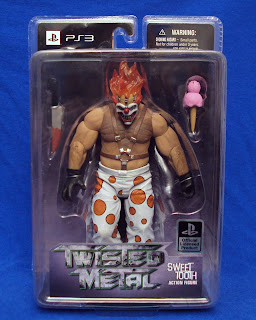 DC Direct's expanded to produce collectibles outside of the DC Universe. One of these new ventures includes video game characters exclusive to Sony PlayStation. Sweet Tooth comes to us from the classic (and newly revamped) Twisted Metal franchise. If you're not familiar with Twisted Metal, it's like Mortal Kombat with cars. If you're not familiar with Mortal Kombat, well, then, I feel sorry for you.

Sweet Tooth features a highly-detailed sculpt from head to toe. His hair is a separate piece, molded in translucent red/orange plastic to create a flame effect on his head. He's sporting a sculpted-on clown mask with a creepy as all hell grin. The teeth on the mask are sculpted out individually, painted in silver with a dark wash to bring out the details. Sweet Tooth's mask features straps and buckles, and while it isn't removable, the sculpting provides a lot of depth and detail. The mask itself has many cracks and wrinkles, giving it a very worn look. There's a rough texture along his jawline that is embellished by the paint used for his beard creating a like-like look. Feel free to click on the first picture on the left to get a nice close-up look at the detail.

As you can see Sweets is a big, hairy, burly man. There's a nice texture on his skin, especially on his chest and forearms, where they've painted body hair. His torso harness is also sculpted on, but like the mask straps, has an excellent amount of detail with small nicks and scratches throughout. His right hand is sculpted open, but the fingers are bent as if he were clutching or holding something (some one's heart, perhaps?). The left is semi-closed in order to accommodate his accessories. The paintwork across this figure would put any other "adult collector" figure to shame. From the reds on his head for the hair, nose and lips, to the muted colors of his flesh and body hair, it's exquisitely done. 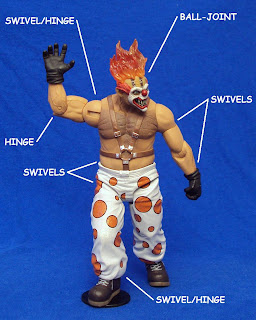 DC Direct (and DC Unlimited) figures are known for their superb sculpting and paint, but they usually leave a lot to be desired in the articulation department. The various points on Sweet Tooth are illustrated above. The main problem is that there is no knee articulation. The legs are sculpted in one piece from the hip to the ankle. Additionally, the angle the knees are sculpted in limit your posing options as far as his stance. He pretty much has to keep his legs in a certain position otherwise he won't stand. This pretty much nullifies the need for the hip and ankle articulation. However, the arms allow for a bit more gesturing and aid in creating different poses. 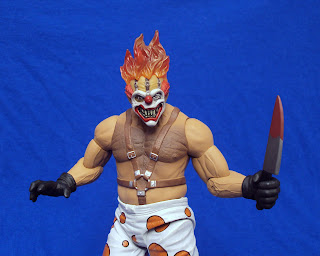 Ol' Toothy here is packaged with three accessories, but I'd really only count two of the as actual accessories. The first is his blood-stained butcher knife, which he can hold in his left hand. It's nicely detailed and looks very menacing. I don't think the blood achieves the desired effect because it's covering half the blade in a solid coat. I think a splattered design would have added some gore to this piece. As is it just seems like he dipped the blade in some strawberry jam. 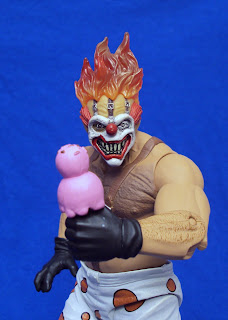 If you've played Twisted Metal, then you know Sweet Tooth drives an ice cream truck, so his second accessory is completely appropriate, yet a bit on the goofy side. It's an ice cream cone with two scoops and a few sprinkles of doom. The cone, like the knife, can only be displayed in his left hand. The third accessories is a small disc with a peg on it, or in a word, a stand. While it's not completely necessary to get him to stand, it does help out by adding stability to the figure. You can count the stand as an accessory if you want to, I guess. 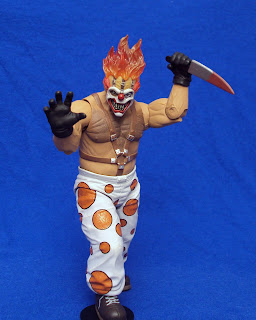 At roughly $18, Sweet Tooth is a bit more expensive than the action figures I usually buy, but similarly priced to anything from DC Direct (which I rarely buy). I'm not a huge fan of Twisted Metal, but ever since I saw this guy at my local Toys R Us, I knew I was going to get him eventually. He just looked too wicked not to! I finally caved-in a couple of weeks ago when I ordered the first wave of Green Lantern Classics on TRU.com and needed to add another $10 to my order to qualify for the free shipping offer. I'm glad I ordered him, because my local TRU is sold out of him now. He's a great figure and looks killer on the shelf. I'm currently displaying him with the ice cream cone because I don't want to creep my daughter out (too much) when she thinks of clowns.
Posted by 3B at 7:25 PM