I hope you can excuse my brief hiatus, I've had "custom-fever" for the past couple of months, working mostly on GL-related customs (because we all know there aren't enough GL figures coming soon...).

Anyhoo, I'm taking a break from Frankensteining and painting action figure parts to bring you today's review. He is "The Animal", Batista! 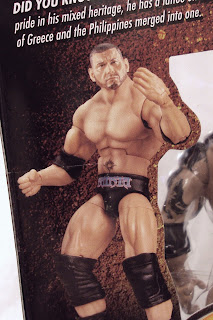 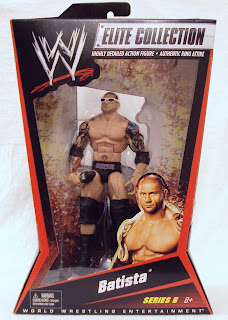 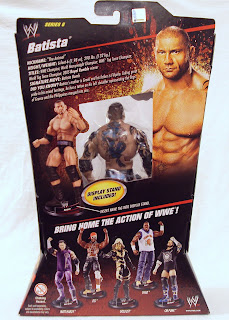 Batista arrived in the WWE just after the "Attitude-era" along with Superstars like John Cena and Randy Orton. I was never a fan of his, but his last run in the WWE as villain opposite John Cena was very entertaining. After a series of main events following WrestleManie XXVI (that's 26, if you're wondering) last year, Batista walked away from the world of professional wrestling to supposedly pursue a career in Mixed Martial Arts. This is Batista's second Elite Collection figure and is based on his appearance before "retiring."

Series 6 was the final wave of figures in 2010 and one thing to note is the heavily airbrushed images on the back of the package. This was the first time Mattel strayed from using clean images of the figures in the wave. Even more confusing is the inaccuracies in Batista's image. They completely ignored the main appeal of this figure: the brand-new tattoos! 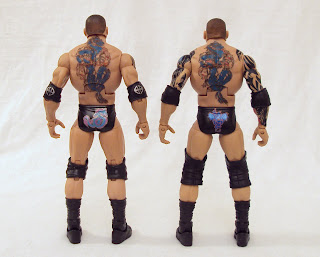 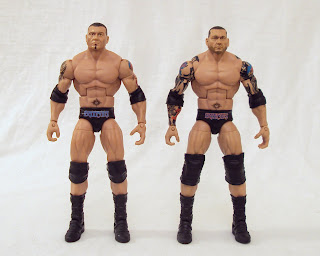 The E6 Batista is structurally identical to the series 2 figure, which is shown above in the comparison shots, except for the head. E6 Batista drops the smirk for a much for focused, determined stare. From the neck down the only differences are restricted to decos.

This version of Batista features plain black elbow pads, which is weird considering Mattel could have just reused the pads with the printed logos. He's still rocking those long knee pads, which is inaccurate to the timeframe the figure is based on. I swapped out the knee pads on his first release and ended up doing the same on this figure. 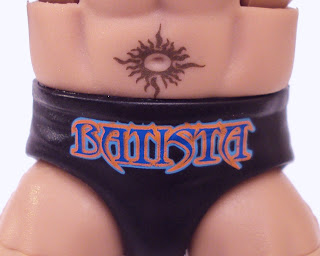 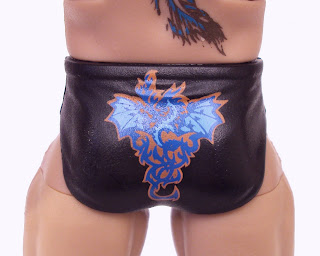 The stylized "Batista" lettering is much more effective this time around thanks to the colors used. The backside of the tights features a new dragon logo design and neatly printed. 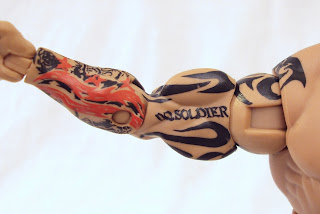 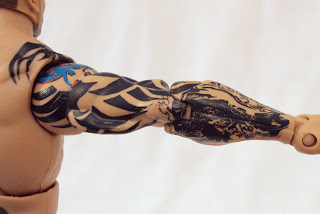 The main appeal of this figure is that it closely follows Batista's look at the end of his career and that means lots more tattoos than the previous figure. Once again the design team showcases their dedication to detail and authenticity with the work on Batista's arms. This time around he's sporting several new tattoos, several of which create a sleeve down his right arm. 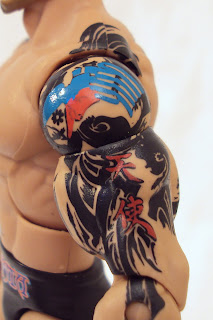 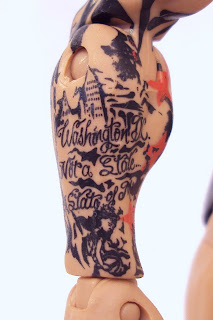 The artwork overruns his arms, climbing up on to his shoulders. "DC Soldier" is clearly printed on the inside of his right bicep, while "Washington D.C., not a state... a state of mind" adorns the forearm. Perhaps my amazement at the level of detail Mattel achieves on these tattoos is excessive, but DAMN, they look good! It's a shame Batista hadn't finished up his left arm sleeve before Mattel scanned him for this figure, because that would have balanced the figure out. 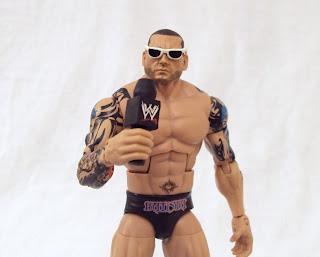 Dave here still included the name tag and display base that were previously available with all of Mattel's WWE figures. His true accessories are his sunglasses and microphone. Those don't add up to a whole lot considering the accessories included with other figures, but I guess at least one figure has to get the short end of the budget stick (Series 4's Jericho, anyone?) and this time around it was Batista. The sunglasses make him look a bit goofy, but that may have been his intent all along. The microphone has appeared in the line before, but they still couldn't get it right. It only features WWE logos on two sides (instead of on all four sides like you see on TV). 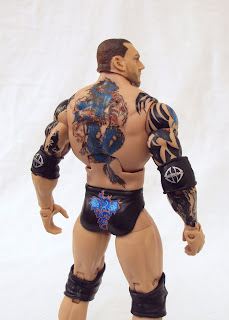 Like I mentioned before, I was never a fan of "The Animal," but considering his final work on WWE programming and the overall aggressive look of this figure, I couldn't resist adding it to the collection. So much so that I gave up the series 2 figure, using this one as my sole Batista figure.
Posted by 3B at 12:10 AM