CM Punk receives his second entry in Mattel's WWE Elite Collection this figure from series 6. At the time of it's release, Punk was already sporting a shaved head, so the figure was already somewhat out-dated. Let's take a look at what makes this figure unique and whether he's worthy of joining your collection. 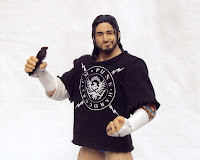 The sculpt on this figure is 100% identical to CM Punk's Elite series 1 release. The only difference regarding the sculpt is the addition of an elbow pad on his right arm to simulate the wrap Punk uses. I'm a little confused by Mattel's decision to add a pad instead of just painting the elbow white the way they paint the wrist tape on. I guess it gives you the option of displaying him with or without the pad since it is removable. Plus, you can admire all the sweet body art! 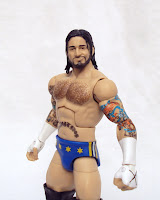 The true appeal of this figure is the new paint applications. Punk's sporting blue tights with the usual starry-details he uses on his wrestling attire painted in yellow. He's also sporting a full beard that is painted over the original 1st series head. Along with the hairier face, Punk has some painted chest hair. The chest hair is painted in brown, although it's a bit lighter than his body hair actually appears.

Mattel used more subdued colors on the tattoos this time around, creating a more realistic effect to Punk's body art. I noticed some alignment issues with the tattoos on his left arm, specifically on the bicep and shoulder. The image doesn't line up correctly, or at least the way it did on the series 1 version. I thought it was an issue with my figure, but I've found the same defect on other E6 Punks I've seen in stores. It's not a huge issue, but something to keep in mind if you own the first figure. 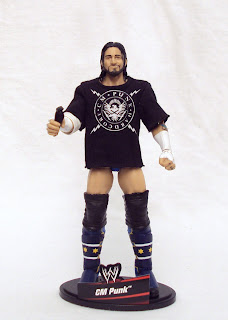 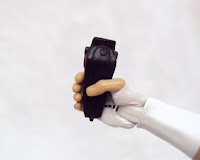 The second accessory comes from the time CM Punk was the "Straight Edge Messiah" and would shave people's hair off to induct into his Straight Edge Society. The hair clippers are molded in solid black plastic with enough detail to distinguish it as what it's supposed to be. I think a touch of silver on the blades would have been a nice touch, but all in all, it's not a bad piece. 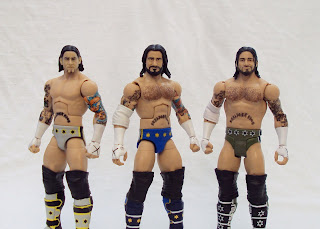 I'm not a fan of Punk's smirking head and decided to swap it out for the "Over the Limit" Punk's which features a stern expression on his face and a sculpted beard. CM punk continues to be my favorite wrestler of the "modern" era. The Elite 6 figure is basically the same as the series 1 version, but he has a bonus accessory in the clippers. I wouldn't call that a vital wrestling accessory, but if you're a completist or a Punk fan, this is a solid figure with a cool new deco.
Posted by 3B at 12:05 AM