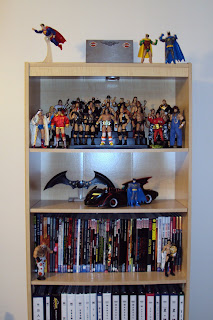 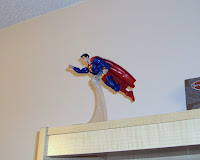 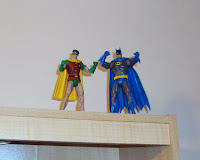 Taking flight on top of the bookcase is Superman from the DCUC "Gotham City 5" five-pack. On the opposite side, the newly released DCUC wave 16 Robin, featuring a "vintage" head, joins Batman from wave 1 to create a legendary version of the Dynamic Duo. My efforts to score Robin with his "Super Powers" head continue to be fruitless, so this guy's all I have for now. 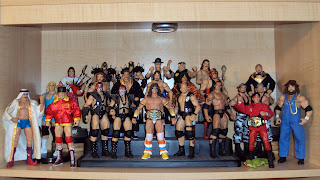 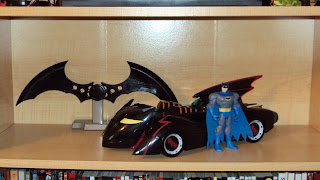 Batman and his Batmobile from "Batman: The Brave and The Bold" are still holding down the center display shelf. This time around, Batman appears in his more familiar gray and blue costume.

Sweet Tooth from the Twisted Metal franchise stalks the lower display shelf, ready to serve some... ice cream? Yep, because he's on a lower shelf, I prefer to display him without his bloodied butcher knife so as not to frighten my little one. On the right, CM Punk carries his special edition "1 of 1000" title belt. He comes from series 2 of the WWE Basic line. If you haven't been lucky enough to snag a figure with one of these belts, I can tell you they are very nicely done and heavy! They're made of a "pleather"-type material and feature metal plates. These belts use velcro to close around the back and look just as big on the figures as the championship title belts. 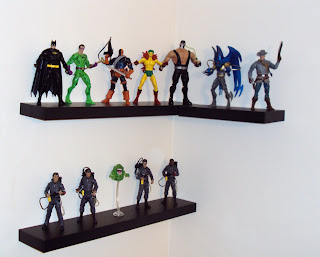 The wall shelves feature a nice mix of new and not-as-new figures. 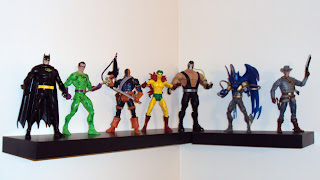 Vintage Robin may be hanging with "Classic Detective" Batman on the top of my bookcase, but the rest of DCUC wave 16 is lined up on the top wall shelf. You'll notice Mercury is suspiciously absent. That's because he went back to Amazon thanks to a broken right hand. That happened after I already assembled his C&C Bane piece, so I was still able to complete the figure. 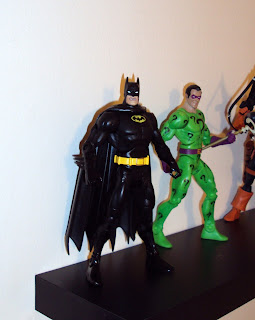 As much as I like this all-black version of Batman, the same old head sculpt was boring to me. I'm currently working on an original Sinestro Corps member using the SC Batman from wave 15, so I just swapped the head out on the All-Star figure. Now he looks kick-ass!

Thanks for checking out my displays!
Posted by 3B at 2:25 PM