Ah, Green Lantern. How we do so love you... and so does Mattel! Especially in the year you receive your very own movie!

Yes, friends, whether you love him or hate him, Green Lantern Hal Jordan (and his 3600 space sectors worth of cronies and enemies) is everywhere this year. Mattel's even created a spinoff line of their ever-popular DC Universe Classics focusing solely on GL-related characters. Today's review takes a look at the Manhunter Robot from the first wave!

I ordered my figure from ToysRUs.com back in January (before the absurd price increase) and it was among a few of the figures I received with some QC issues. Of course, that didn't stop me from tearing into them and assembling Arkillo right away! He was the main attraction for this wave as far as I was concerned.

Anyway, my Manhunter's collar was warped around the front, just below his head. I was not happy about that and planned to exchange him at TRU. However, all of the GLC figures were already sold out online and my local TRU didn't have them in, yet. I ended up finding one at Walmart (it was the sole GLC figure on the pegs) and buying him, with the intent to just return the screwed up robot at TRU. Well, I messed with him a bit and was able to more-or-less correct the collar. I then decided to keep both Manhunters because having one seemed asinine. I mean, how to stupid would Sinestro Corps Cyborg Superman look on the shelf leading ONE Manhunter?

The Manhunter makes use of the standard DCUC body with several new pieces. It features nicely detailed armored forearms and lower legs, plus the aforementioned collar and new head sculpt. As a bonus, Manny here features some new articulation, although it doesn't exactly benefit him in the best way possible. More on that later. 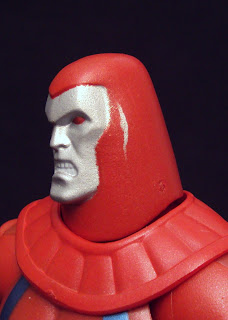 The paint on the Manhunters is mostly well-done. My first figure (the one with the warped collar) also featured a random silver streak across his helmet. I assume this may of had something to do with the collar getting messed up. Originally, I was doubly pissed by this "scar", but since I ended up with two, I just pretend this guy has battle-damage. 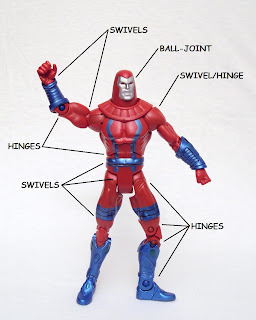 The Manhunters received a mixed bag of old and new articulation. Well, the only new pionts are the double-hinged knees. Everything else is the same old model we're used to. Movements are mostly good, however, the bulky forearm armor restricts the elbow joint to less than 90 degrees. I think dual-hinge elbow may have helped here. 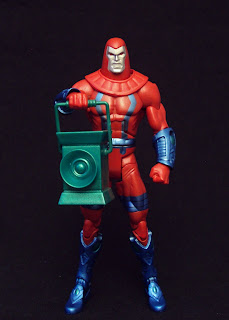 Mattel gave the Manhunters one accessory: a big, boxey, green lantern power battery. I like the sculpting on it and absolutly love the color, but I think the Manhunters would have benefitted from two other accessories. The first being removable faceplates. In the comics the Manhunters' faceplates flip up to reveal a power draining interface, something DC Direct's versions had. I don't know why Mattel chose to overlook that feature. Second, it would have been great to include their power batons, just like the comics and more recently the Justice League cartoon. I've read that the batons packaged with the JLU 3-pack Manhunters will fit in the DCUC versions' hand perfectly, however the $16 price tag keeps me from finding out personally. Of course, the Manhunter robot also includes a piece to complete the wave's C&C figure, Arkillo. I don't count those pieces as accessories. 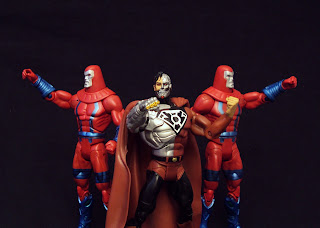 You could argue that the Manhunters themselves are accessories for the Cyborg Superaman. That's what I truly wanted them for. I would have preferred the Manhunters on a larger body, like Batman or the Public Enemies buck. I actually tried to obtain a couple of the old DCD versions of the 'hunters, but they proved difficult to find and costly. Several months ago I found one at a comic shop nearly 35mi from my home, along with the GL box set that includes a truly battle-damaged robot. However, knowing that I would have to buy Mattel's version in order to complete Arkillo, I skipped on the DCD figure. 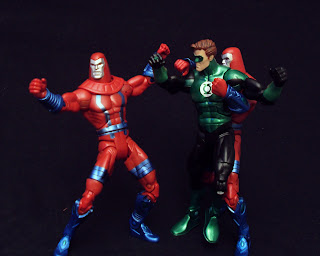 Overall, I'm happy with the figures. They serve their purpose and don't look half bad thanks to the 4H scuplts and excellent paint. I'm satisfied with two, but if I find these guys on clearance, I'd definitely add a bunch of them to the ranks! 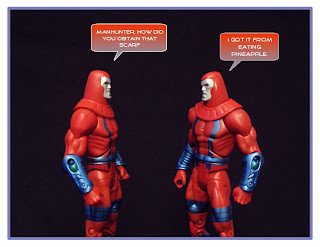