Hey all, it's Novelty again, from Toy a Day.  Well, this is another Bumblebee review, so as I promised 3B, I'll add the review here on his site instead of my own as a guest review.  And this one is going to be a treat for normal readers of Killer B Hive, because it's a toy that's from across the pacific.  Yup, this is a TakaraTomy Transformers toy. 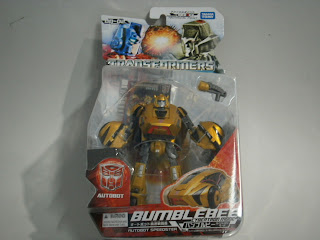 There are two versions of the Transformers United Bumblebee - Earth mode and Cybertron mode.  This review is for the Cybertron mode of Bumblebee, which was also released by Hasbro in English-speaking markets under their Generations sub-line. 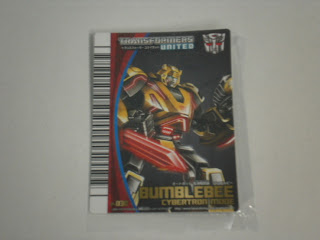 Like most Japanese releases, there's a trading card inside, and this one seems to have a bar code of some sort.  The image on the card seems to be an original image, and despite the fact that this is a Japanese card, there's quite a bit of English text on the card. 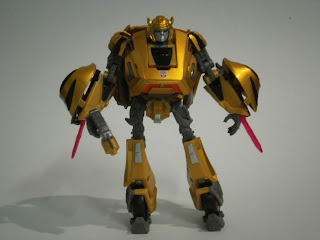 The toy itself is basically a repaint of the Hasbro version (or maybe the Hasbro version is a repaint of this one?), with metallic yellow paint instead of dull yellow paint.  The head sculpt gives Bumblebee a face that looks more like Megatron or Unicron than Bumblebee - he looks mean there.  The articulation on the figure is great, including double hinged joings for the elbows and knees, hinges on the wrists, ankles, hips and ball joints on the shoulders, head and hips again.  It's weird that the hips has a ball joint and a hinge joint, but I'm not complaining.  The paintwork is excellent, thanks to Japanese quality control. 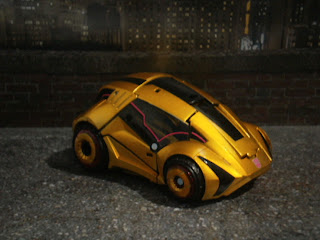 The transformations is a lot complicated, but the figure holds together overall rather well, thanks to built in holes and pegs which holds everything together.  The wheels actually do roll, which adds an extra 4 points of articulation there.  The overall look of the car is excellent, particularly with the black and red highlights.  I think it looks better than the Hasbro version of the vehicle. 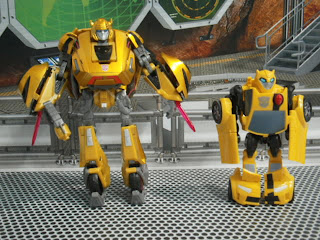 The figure is a bit short and small though, but that's to be expected from Bumblebee.  The Japanese version of the figure, with the metallic paint, looks excellent and I'm glad that I got him.
Posted by Novelty at 12:01 AM