Once upon a time the WWE produced female wrestlers that stood out. Some were beautiful, some were ugly, some were more hardcore than the male wrestlers. Today, most of the female wrestlers (referred to as "Divas") appear cut from the same mold. They look more like fashion models than warriors of the squared circle. Consequently, their in-ring ability is usually poor, save a few exceptional specimens. But the current crop of Divas seems to fit in with the overall watered-down programming WWE is producing. That doesn't mean I don't like collecting them in plastic form, though! Today we're looking at one of these young ladies, Michelle McCool. 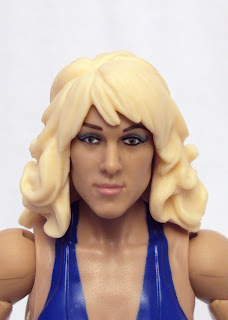 Before I get into the review, I want to mention that this was easily the worst case of failed "Quality Control" I've encountered with any of Mattel's WWE figures. Out of the package, McCool's right hip joint (the parts that form the top of the leg, not the barbell inside) came apart. The left side didn't break apart, but was well on it's way to doing so. I was initially very pissed off and continued to be while attempting to contact Mattel's Customer Service Department. The reason being McCool's package directs you to "service.mattel.com", which has a bunch of useless drop down, FAQ-related, menus. More on that later. 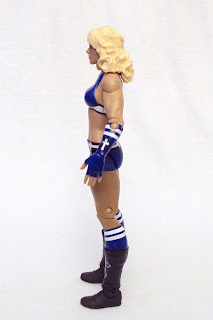 Apart from the head, there isn't much new with Michelle here. She features the same torso with sculpted bra that was featured on Kelly Kelly and Melina (Series 5). The tooling budget is apparently reserved for the male wrestlers as it seems Mattel is trying to knockout as many of the Divas as they can using the same parts. Paint is relied upon to create McCool's outfit. The paint work is mostly good with a few blurs and smudges on the lines of her socks. The crosses throughout her costume are applied cleanly, but the one under her chest requires the upper torso to be tilted forward awkwardly in order to line up with the lower half correctly. This is due to the crosses being applied across two body parts. I think painter just needed to take a moment to line her torso up properly before they applied the cross to that area. Easy solution. 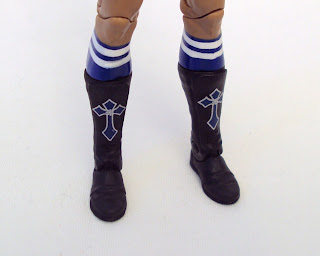 Also like Melina, McCool is sporting the kick-padded boots which provide a nice flat surface to add some more logos on. 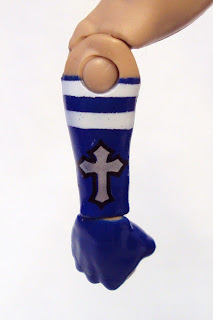 The cross logo is also applied crisply on each forearm. 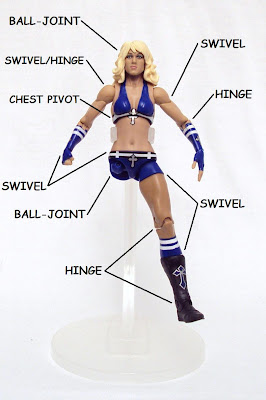 Michelle's articulation is the usual model featured on the females in the Basic line. They have ball-joints in the hips (perfectly visible in the image above thanks to the busted hip) as opposed to the basic swivels on the male wrestlers. All points work as they should and none were loose. Back to that broken hip piece... Frustrated of being unable to contact Mattel's service department and having given up on returning the figure to the store I purchased it at (Walgreens, of all places...), I took matters into my own hands and glued the two hip pieces together. Luckily, I didn't screw up the articulation! 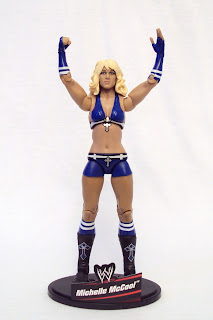 The only accessories included in the package were the, now-retired, display stand and name tag (as was usual for the Basic line). If removing these from future figures truly keeps prices down, then kudos to Mattel. I never felt the name tags/stands were necessary. 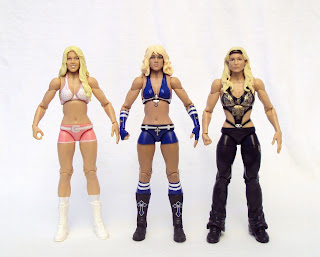 A quick comparison of the three Divas I've collected so far reveal the similarites between Kelly and Michelle. At a distance the paint does a lot to keep these two gals different. It's only up close when you see the sculpt lines and things seem lazy on Mattel's part. Anyway, I'm sure McCool fans will be pleased with this figure because the overall sculpt does capture her quite well. Customizers will surely enjoy the thicker proportions of a wrestling figure as fodder for superheroine projects. Kind of ironic Mattel makes these considering who gangly their DCUC females turn out. 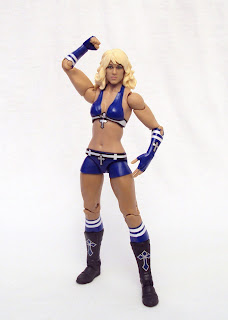