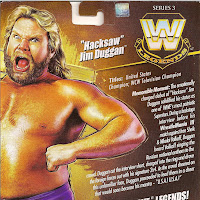 I'll admit that even though I wouldn't mind it (if I had the money), I'm not a completist. Because I actively collect several different toylines, I pick and chose, I narrow down the figures I want (or at least try to) and only buy those. As regular readers of the Hive already know, I really love Mattel's WWE Legends line. I don't have all the figures so far, but I do have most and an unwritten goal is to review all the Legends I have. Today's review focuses on a figure that I've had for several months now, but has always been pushed aside when it review time comes. Well, today is your day Hacksaw!

I don't know why it took me so long to cover Jim, he's a rather plain figure and the review isn't going to be lengthy. I won't delve into Duggan's history, so let's just take a look at what he has to offer in the Legends line. 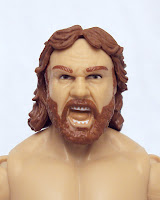 I'm one of those fans that likes to see emotion in the figures' facial expressions. Jim Duggan has a great head sculpt! He's pissed and ready to kick some ass. It's a nice diversion from his more popular, "goofy" character. He received the more portly of the torso sculpts, but fits him just fine. His hair is a separate piece glued on to his head. I'm not a fan of the color his hair was molded in, it's just too reddish, in my opinion. Same goes with the beard. Mattel should have, at least, added some highlights to lighten them up. 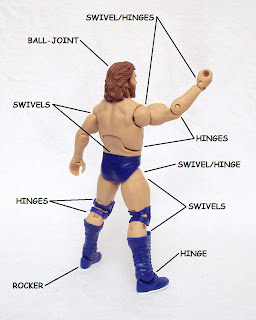 Articulation is the usual fare and nothing malfunctions on my figure. 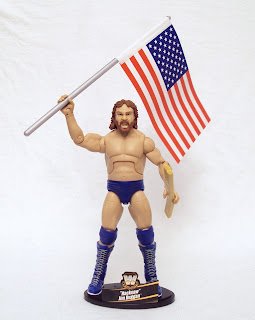 Series 3 of the Legends line still included the stand and name tags, so Hacksaw's got those. But he also includes two "real" accessories, which are completely appropriate and fundamental to any Jim Duggan figure. The first being a pole with the American flag on it. The pole is made of sturdy plastic. The flag is basically a wrap-around decal with the "red, white and blue" printed on it. 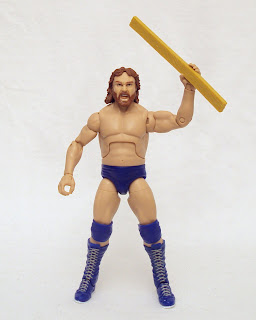 His other accessory is his weapon of choice, the good ol' "2x4" piece of wood. Thanks to the material used for molding it and the packaging tray, the 2x4 was slightly bent at one end. I have not tried to fix that. 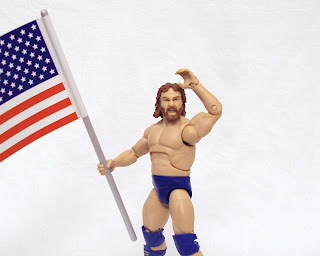 All in all, it's not a bad version of Jim Duggan. There were a couple of missteps with the hair color, but overall, he's a nice figure. Fans of Hacksaw, or goofy '80s WWF Superstars will be happy to add him to their Legends shelf.
Posted by 3B at 11:05 AM