With Green Lantern set to make it's feature film debut in less than two months, you'll see a lot of the Hive's focus turn to all things emerald. Today I'm taking a look at somewhat infamous member of the Green Lantern Corps. He hasn't been seen in several years, but I have a feeling he'll be back eventually and ready to team with his longtime buddy, Guy Gardner. He's the dog-faced GL: it's G'Nort! 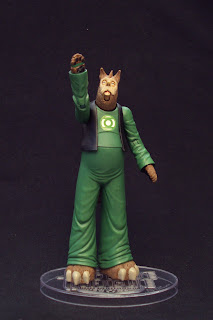 G'Nort comes to us from DC Direct's Justice League International action figure line, based on the comic series of the same name. For those unfamiliar with this character, he's a humanoid dog alien who's a bit of a goof. I guess you can say he's the Goofy of the GLC. Although he was featured heavily in the comics prior to Hal Jordan's mental breakdown and subsequent destruction of the Corps, G'Nort has yet to reappear since Geoff Johns revival of Jordan and the GLC. I for one would like to see G'Nort back in the GLC. 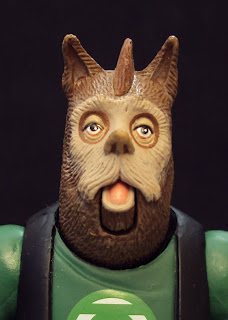 As is typical of DC Direct figures, G'Nort is well-sculpted with plenty of detail. While this version is great and captures his appearance in the JLI comics nicely, I'd prefer to have a version based on the GL comics, where his head appeared more dog like with a longer snout. This version reminds me of Barf from Spaceballs.

G'Nort's GL uniform isn't the typical "tights" you see on Hal or 90% of the Corps. He's lookin' pretty groovy in his black vest and bell-bottom pants. He's the disco Lantern! You'll also notice, G'Nort doesn't sport the usual Green Lantern power ring. Since he has paws like a dog, he wears more of a power bracelet. 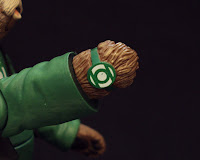 The bracelet is sculpted completely around G'Nort's right paw, however the GL logo is simply painted on. I don't see that as a big deal because is accomplishes it's goal well enough. Most of the paint on G'Nort is well done and I couldn't find any major issues aside from a few missed paint apps so small you'll only notice them up close. 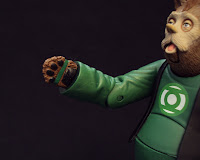 The paint work on his face is particular well-executed, with nice detailing on and around his eyes. His mouth was also well painted, without any blurring on his tongue and lower lip. The uniform is a straight-forward and simple design, so not much time had to be devoted to painting it. It looks clean without any slop where the black of his vest meets the green uniform underneath. 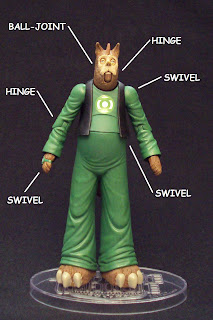 Articulation is where G'Nort really suffers like many of the offerings from DC Direct. Unfortunately, this GL got the short end of the stick, even when compared to other DCD figures. By my count Norty has 10 points of articulation, none of it coming from his legs. That' right. He has zero movement in his legs. What's more (or less), his shoulders are reduced to swivels. Now, it may not seem like a big deal since he'll be posed primarily upright, but it would have been great to get him into more of a dog pose, on all fours. I guess that may go back to his appearances in the GL comics as opposed to JLI. I do, however, love the aritculated mouth, because it allows him to achieve a dopey expression just by dropping the lower lip.

No accessories for the big G. He's packaged with a transparent "JLI" logo base and his tail, which you have to plug into his body yourself. No power battery. No construct. No loose Guy Gardner boot. Nothing. Not completely unexpected, though, DC Direct, like Mattel rarely adds accessories with their figures. 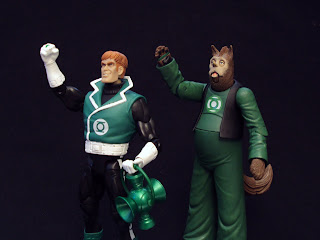 As usual for DCD figures, G'Nort's just a tad taller than DCUC figures. I don't really mind the height difference when it comes to alien characters and he fits in nicely with the rest of the GL Corps in my display. I would prefer a more GL-comics-based version of G'Nort, but it's unlikely Mattel will ever get to him and I doubt DC Direct is in a hurry to release another figure of him, so I can live with this version. Articulation is a sore spot on the figure, but managable considering what you'll really be using him for. My G'Nort was a gift from my girlfriend, but he typically sells for about $15, not too bad given the current prices for DCUC. If you can find him on sale, I definitely recommend him as a cool addition, if somewhat comical, to your GL collection.

And who knows, maybe he'll reappear in the comics someday soon... or a certain green-hued film coming out June 17th...
Posted by 3B at 11:55 AM