Currently on Display: May 2011

Hello! And welcome to another edition of "Currently on Display", where I invite you to take a look at what's on display at "Casa de 3B". There's a lot of superhero action coming to the big-screen this Summer, but no film has me more excited than Green Lantern! In anticipation of the upcoming movie (and after finally getting enough GL figures from Mattel's DCUC, GLC and Movie Masters lines, plus a few from DC Direct and several customs), I'm happy to show off my Green Lantern and Sinestro Corps displays to you! Enjoy! 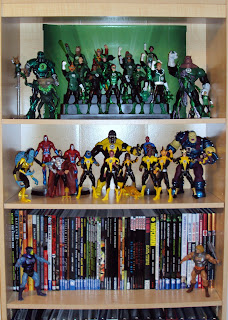 First up, the top shelf is devoted to solely the Green Lantern Corps. It's a nice almagamation of classic and modern figures with a few treats thrown in. Back in December of 2009 when I picked up DCUC11 with John Stewart, Katma Tui and the C&C Kilowog, it seemed like my GLC display would never fill a shelf. But now, a year and a half later, there are plenty of power rings available and surely more to follow soon. 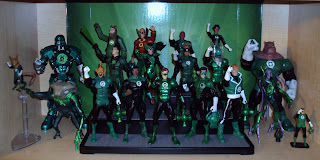 The background is the package insert from the "Green Lantern's Light" 5-pack. I actually have an idea to create a GL-logo background which I think is going to look really nice. Hopefully, I'll have it ready for next month's edition of CoD.

The second shelf houses the dastardly Sinestro Corps and I'm really proud of this particular display because it features four figures I customized myself, the most essential of which being Sinestro. With so many of the recent GL figures being SC-related characters, I knew I had to fix my DCUC Sinestro so he'd be ready in time to display with his subordinates. After a lot of work, I finally completed him and now he's worthy of leading a Corps.

Most DC Direct figures are significantly larger than DCUC figures and don't really match up, but there are many that blend in nicely. I'm definitely open to mixing them in with my DCUC figures, especially figures like Boodikka and Mongul which are larger than most of their comrades. In the case of Mongul, he's not 100% accurate to his appearance in Blackest Night as far as his costume, but he's close enough and spanks Mattel's version thanks to his size. He's only a fraction larger than the C&C Arkillo, but stands at the same height because he's sculpted in a hunched pose, which is fine with me. Kryb's a figure I doubt Mattel will even bother with, so the DCD version will probably be your only option. Thanks to her monstrous appearance her size seems to fit in compared to the DCUC figures.

I'll admit I'm not too crazy about the costumes in the Green Lantern film, but I do like a lot of the character redesigns. When I found out Rot Lop Fan was going to appear in the film AND receive an action figure, I knew I had to add him to my collection. Like most of the alien GL's in the comics, RLF appears mostly as a humanoid figure, but the movie redesigns him into more of a bug. I think it's a great version of him and I'm eager to do some customizing and make his costume more comic-like. G'Hu is the only other movie-based figure on the shelf, but won't be the last. I'm definitely in for Isamot Kol and Galius Zed! And I cannot wait to complete the enormous Parallax C&C. It sucks that we won't be able to finish him until the end of the year. But I think he'll look great behind Sinestro on a future display.

Finally on the third shelf I have a classic confrontation between Battle Armor Skeletor and Battle Armor He-Man. The serve as little change from all the ring-slinging fun on display on the other shelves. I'm digging a lot of the upcoming MotU figures like Battleground Teela and Space-Marlena (aka Captian Glenn).

Well, that's it for this edition of COD. I'll leave you with a few more shots of this months display, taken from different angles. Thanks for looking! 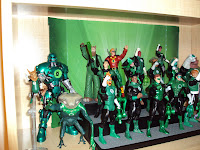 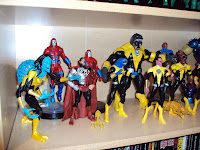 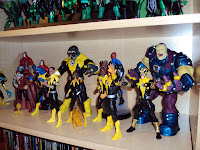 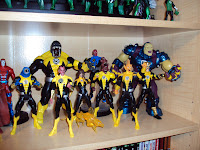