We're just a little over a month away from the feature-film debut of Green Lantern, but movie merchandise has been in stores for nearly two weeks now. I was most eager for Mattel's Movie Masters figures based on the film. I'm not too crazy about the costume redesigns, but I'm happy to see a lot of the alien GL's featured in the movie and the toylines. Let's take a look at my most anticipated figure from the first wave, who ironically is technically not a "Green Lantern". Who is this creature? He's the sole member of the F-Sharp Bell Corps, Rot Lop Fan! 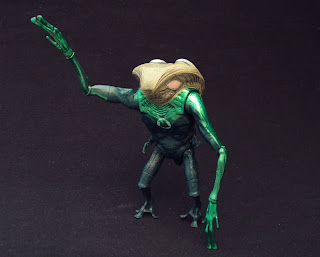 You may be asking, "What the hell is an 'F-Sharp Bell Corps'?" Well, Fan made his debut in a story called "In Blackest Night" (not to be confused with the more recent storyline, "Blackest Night") which appeared in Tales of the Green Lantern Corps Annual #3 written by Alan Moore and pencilled by Bill Willingham. In the story, Green Lantern, Katma Tui is tasked with venturing into a lightless part of the universe called the "Obsidian Deeps" to find a being qualified to represnt the GLC. She stumbles upon Rot Lop Fan on a planet withing the Deeps. Being from a lightless area of the cosmos, Fan is completely blind and has no concept of light or color, however, he does understand music and sound. After struggling and failing to explain what a Green Lantern is, Katma tries a different approach. She asks Rotty what pitch soothes him and he choses "F-Sharp." Katma re-writes the oath and creates a modified uniform for Fan based on a bell instead of a lantern. I highly recommend you read the story, it's a real treat from one of the most legendary comic writers and it's easily available in several tradepaperbacks. I read it in Moore's DC Universe anthology, which features several more GL stories, including Blackest Night progenitor, "Tygers."

"In loudest din or hush profound,
My ears catch evil's slightest sound,
Let those who toll out evil's knell,
Beware my power: the F-Sharp Bell!" 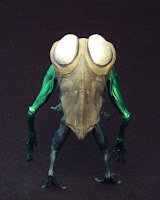 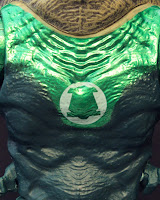 Rot Lop's movie redesign is actually very faithful to his comic appearance, except for some color changes. He's kind of like a bug, featuring a thick husk forming a quasi-shell on his back. His awkward shape makes it impossible to keep him standing without the use of his arms for balance. His entire body is textured, which may turn some fans off of adding him to their comic-based GL displays. My main complaint is the dull green color on the movie uniforms that replaces the black areas of the comic costumes. I'm planning on repainting him eventually to make him more comic-like.

As you can see Fan's sporting a bell-shaped logo on his chest as opposed to the familiar lantern symbol. The logo is simply painted on instead of sculpted out like Movie Masters Hal Jordan and Tomar Re. While I'd prefer sculpted details, especially where the logo is concerned, it's to be expected given Mattel's track record with DCUC. 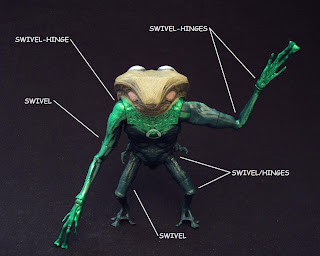 Articulation is pretty good for Rot Lop Fan, featuring lots of swivel and hinge combination joints. All the points work well, which is better than I've experienced with some of the other GLMM figures. 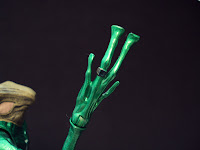 Fan does not include any accessories save for a Collect-and-Connect piece of Parallax. He is sporting his power ring and since it creates whatever the wearer can imagine, I guess you can imagine some accessories to go with him. It would be cool to have a power battery for Rot, but it would have to be shaped like a bell instead of a lantern.

The Parallax tentacle features lots of detail throughout, with tortured faces and skulls pushing through it's "skin" and ending in triple serpent-head. It's molded in a transparent yellow rubber with a flexible metal rod running through it. The tentacle is painted with thick yellow paint on it's base near the connector joint, then fades off revealing the clear yellow rubber. A dark wash is used on the serpent heads to bring out the details of the sculpt. It's genuinely fearsome in appearance and I really can't wait to see what Parallax will look like when completed. You should note that this tentacle is identical to those included with Hal and Tomar and apparenlty will also come packaged with Naut Ke Loie and probably Sinestro. I hate the fact it will take several months (at least) to complete him because I want to put him in my Sinestro Corps display right NOW! Until then, I'll just have to imporvise... 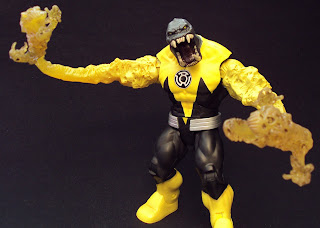 For right now we'll just have to enjoy the GLC-heavy Movie Masters line until at least the second half of the line (with Guardian of the Universe, Krona, bulb-headed film baddie, Hector Hammond, and a sure-to-be-spoilerish 6" version of Parallax) hits stores later this year. 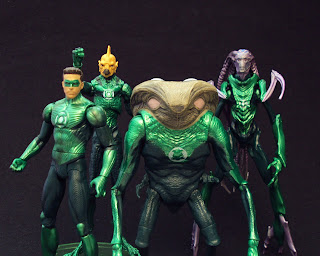 Make sure to check out this month's installment of "Currently on Display" to see how Rot Lop Fan and G'Hu stack up next to comic-based GL figures!
Posted by 3B at 4:30 PM