I'll admit it: I'm a sucker for action figures with removable masks. One of my all-time favorite action figures is Venom from the "Spider-man: The Animated Series" line, which featured a removable symbiote mask. In 2010, Mattel's Elite Kane figure, from series 4, made it into my top 10 figures of the year. Now comes a masked version of the Big Red Machine, but will he live up to his predecessor, or burn in a blaze of hellfire and brimstone?! 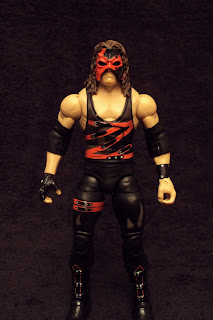 Nowadays, Kane's big, bald mug is commonplace on WWE programming, but when he first debuted only his eyes were visible from beneath his red and black mask. As years went on and the character evolved, so did his mask and costume, progressivly revealing more of his face until his inevitable un-masking. This Ringside Collectibles exclusive follows Kane's appearance at the time of the un-masking.

First off, I'd like to say that this is my favorite version of Kane's costume, so the figure is already cool in my book. The main selling point of the figure is his removable mask. It's molded in one piece with the hair and simply slips over his head. The detailing is fantastic! On the mask part itself, there are plenty of raised areas like the brow and stitches along the front. The hair is sculpted with Kane's semi-curly/wet look, but you can find the mask straps poking through all the way around to the back. The mask/hair piece is molded in brown plastic to match his hair color, with red, black and copper added for the mask portion.

When I first received the figure and opened him up, I immediately noticed the torso was significantly slimmer than the E4 Kane. I thought Mattel had used the Jack Swagger/Mr. Perfect torso, but when I compared this Kane to Swagger, I realized it was a different sculpt. I then realized they used The Undertaker's body to create this Kane. Likewise, his ariculation is identical to that figure. The only sculpting differences between this Kane and Taker are: the head (obviously), the right hand (Kane's is gloved) and the boots. Kane's head is reused from previous Basic series figures of the Big Red Monster, as is the gloved hand, but the boots seem to be brand new. Those feature several sculpted details like the straps and studs. 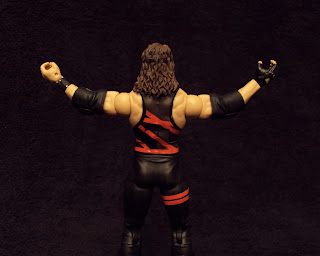 The rest of the details on Kane's costume are painted on. If you're familiar with this costume you'll remember it had portions of quasi-see-through fabric throughout, allowing for some skin to show through. To recreate this effect on the figure, Mattel used a grayish paint for those areas on the costume. Most of the paint on my figure was crisp, except for a bit of the edge on the tank top over his chest and a random glob of red paint on his hair. Aside from that, the applications of the red straps and buckles is excellent. 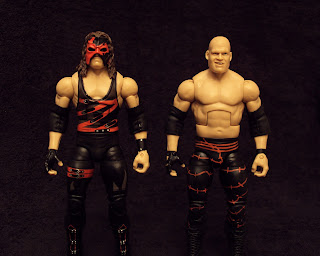 Here you can compare the masked Kane (ca. 2003) to his current look. There is quite a difference between the size of the torsos, but I think he was bit slimmer back then, so I won't go as far as to say it's inaccurate. I should also point out that the masked Kane's head isn't as thick as the E4 figure's, so the mask fits extremely tight if you were to place it on the grinning head. 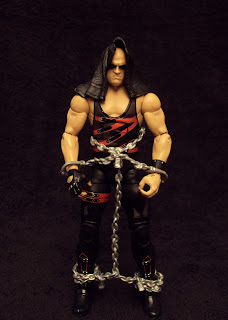 Included with this version of Kane are the same accessories his Elite 4 figure received: a black towel molded into a hood and shackles. Because of the slightly smaller head, the towel/hood accessory had to be remolded a little tighter so it would hug the face better. The shackles are 100% identical to the previous release. While I hate getting the same accessories with different figures, these are completely appropriate to the figure and are still really cool. 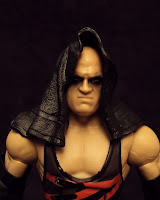 Once you remove Kane's mask, you get a clear view of the monster lurking beneath. His face is sculpted with a very pissed off expression. You'll notice the dark make-up around his eyes, which is done for added effect when wearing the mask, just like Batman's cowl in the live-action films. I will note that Mattel did not give him a goatee, which he did wear at the time. I understand the desire to avoid having to resculpt an entirely new head just to add a bit of facial hair, but they could have achieved it with some paint. 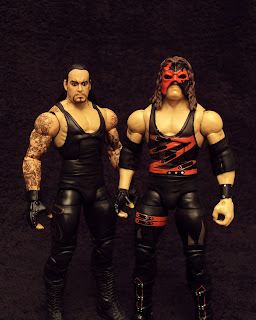 When this figure was announced several months ago, I knew right away it was a must-have for my collection. The level of detail is consistent with the rest of Mattel's WWE Elite line AND it's my favorite version of Kane! The price, however, is hard to take. Being that it's an e-retailer exclusive, they can pretty much charge whatever they want for it. Ringside Collectibles currently prices their Mattel Elite exclusives at $25.99 plus shipping. I was able to use a code for 10% off my order which brought my total for Kane to $31.64. That's on par with another of Mattel's action figure lines, Masters of the Universe Classics, which sell for $20 for single figures and then add tax & shipping. If your collecting Mattel's WWE figures and you're a fan of the Big Red Machine, you'll surely be pleased with this release. Casual collectors will have a much harder time swallowing the $30+ bill, though. This is my first Mattel WWE exclusive from Ringside Collectibles and considering the terrific job they did on it, I'm definitely game for the next one, a masked CM Punk!
Posted by 3B at 11:00 PM