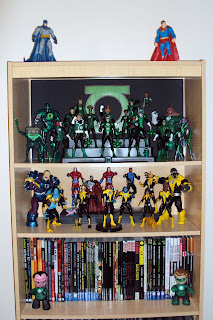 With all the Lantern goodness going on this month I had to make some room for non-ring-slinging figures. So I turned to two other DC staples to hold down the very top shelf of the bookcase.

These Batman and Superman figures are from DC Direct and were designed by Andy and Adam Kubert, respectively. Batman hails from Grant Morrison's "Batman and Son" storyline, featuring the art of Andy Kubert. Superman flies out of "Superman: Last Son" by Geoff Johns and Richard Donner, illustrated by Adam Kubert. 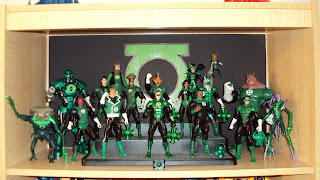 The Green Lantern Corps occupies the main display shelf once again. This time, though, I created a custom background with the previously used green background and overlayed a sheet of construction paper with the GL logo cut out. I also wanted to keep things green, so I removed Alan Scott from the display along with the "New Frontier" figurine of Hal. There are a few smaller items added like Scott's lantern sitting near John Stewart, a movie lantern and kid-sized power ring to spice things up. Also, I went for less of a "reciting the oath" pose and more of just a ready for action pose with most of the GLs. I was hoping I'd have the Movie Masters Isamot Kol prior to photographing the display, but it seems he won't be released until later in the month. Next time, I guess. 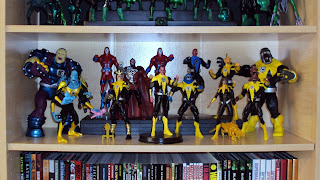 The Sinestro Corps continues to spread fear on the middle shelf, but they too were shifted around this month. This time around I wanted to pose most of them in an "attack" mode, as if they were all blasting at a target ahead of them. I kept Sinestro idling in the center as he usually keeps his calm before striking without warning. It's a shame he can't cross his arms because it would be great to have him hovering above his subordinates posed that way. This time around, Kryb is able to show-off her babies, holding each in two of her bony hands. My daughter is constantly concerned about this, pointing out that "the monster got the babies!" I reassure her precious little two-year-old heart that "the monster" isn't hurting the babies.

Just like I was hoping to add Isamot Kol to the GL ranks, I wish I could have finished my next SC custom in time to display. But I just haven't had the time to work on him. I'll make sure to feature him somehow as soon as he's done.

The lower shelf features my newest Mez-Itz figures: movie-based versions of Sinestro and Hal Jordan. These came in just a few days before I snapped these pics and I thought it fitting to include them in this month's display. I was able to snag these off of GeekChicDaily.com last week when they had an offer to get both for $9.99 plus $10 for shipping. The pair shipped were still cheaper than buying them at retail. 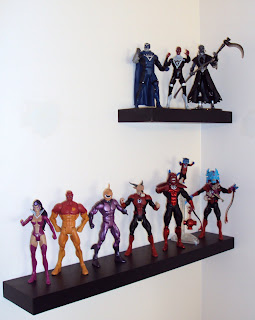 The lantern madness continues on the wall displays with several other GL villains. The Black Lantern Corps (albeit a very limited force of them) wreaks havoc on the top shelf. Below various other villains pose including a squad of Red Lanterns led by the atrocious Atrocitus.


That's it for this month! Check back with the Hive throughout the week as more GL-related toy goodness will be featured leading up to the release of the live-action film. Here are some parting shots for you. 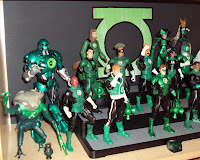 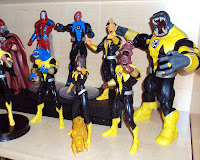 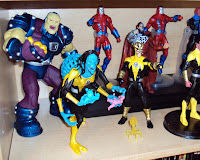 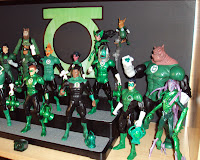