Thanks to fanboy uproar, the first Ghostbusters figure to feature the Slime Blower, Winston Zeddemore, received a brand-new, SB-accurate, torso sculpt instead of recycling the previous, Proton Pack-specific upper body. Let's take a look at how he turned out and whether or not Mattel was able to silence THIS fanboy. 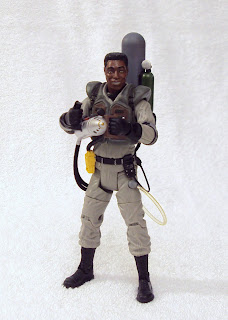 I've loved Ghostbusters since the first time I saw the movie and that love only grew with the animated series, toys and eventual sequel. One of the things I (and I believe most GB fans) enjoy is the tech used in the films to capture/combat paranormal threats. Without a doubt my favorite piece of "busting" equipment is the Slime Blower used in the second film. I love the look of it, it's decidedly low-tech approach to fighting ghosts. Unfortunately, the old Kenner toy line never really addressed the blowers, at least not in action figure size, so I was always left wanting. When Mattel debuted their GB line, I eagerly anticipated the day I would have movie-accurate action figures carrying my favorite GB hardware. Finally that day has come and now I have it in hand.

This version of Winston, the third in the line, is built with the new torso and head, reusing the lower torso and legs from his first release and borrowing the belt from the GB2 four pack version. The arms are the same used on the slimed and unslimed versions of Peter, featuring gloved hands, only with the GB2 logo on the right sleeve. The sculpting on the torso with the Slime Blowers chest harness is fantastically detailed and is painted appropriately. I do believe the harness is a bit over-sized compared to the live-action counterpart, but not to the point of looking completely inaccurate.

Much like the phenomenal job done on the Proton Packs, Mattel has delivered a fantastic representation of the Slime Blower. You can clearly make out the various components that make up the blower's slime reservoir and pressure systems. There's a bunch of hoses linking the tanks to the control systems and the slime cannon. The main tank features a large strip of "caution" tape along it's length. A great detail that was added to the slime tank as was to the Proton packs is the wear marks that seem scratched into the cylinder. It adds a great level of authenticity to the unit making it look worn.

The second part of the unit is the highly-detailed slime cannon. It features the same great silver finish as the movie version with the copper nozzle. The cannon features two handles, which seem a bit oddly placed, but enable the figure to hold the weapon in a threatening manner. As threatening as a device that spews positively-charged ectoplasmic slime can be, anyway. It's interconnected to the reservoir tank by no less than three flexible hoses, each with a brass-colored connector plugging it to the cannon. Now, if I wanted to be all nit-picky, I'd mention that the strap holding the cannon over Winston's shoulder was omitted from the figure. But it's not something that makes a difference to me, it looks fine without it. 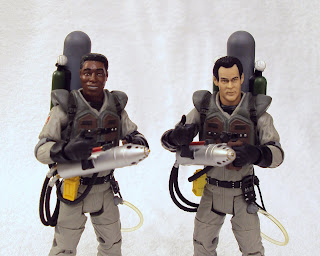 Now, because I'm impatient (or because I've patiently waited for 23 years), I purchased two SB Winstons. Once I knew Mattel was delivering an accurate version of Zeddemore with the blower, I wanted two so I could have a Slime Blower Ray. The above shot features Ray's head borrowed from his Lab Coat figure. At this point you may be asking, "What did you do with the spare Winston head?" Well... 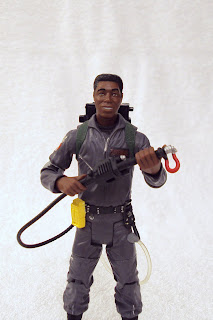 Now I have a corrected GB2 Winston in the dark grey uniform! Yep, Matty couldn't finish the new sculpt in time for the four pack featuring the boys in grey last Fall, instead choosing to reuse the previous head sculpt without painting his SCULPTED mustache. So I took it upon myself to fix that problem by simply swapping out the head for the new sculpt. It does seem like this head is a little larger than the other one, but hey, let's not push our luck. 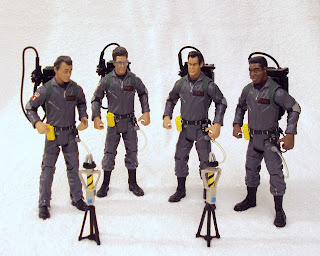 The only not-fused-to-the-figure accessory SB Winston includes is a tri-pod mounted ghost trap, which appeared in one scene in GB2. I don't know why Mattel chose to include it here, Winston wasn't carrying the Slime Blower in that scene and he, along with the other 'Busters, was wearing the dark uniform, hence the use of those figures in the above photograph. Thanks to the double WZ purchase, I have two of the tri-pod traps, but you'd need four to recreate the scene. The traps look good and actually have minimal articulation on the laser beam emitters at the top. It may not be a ghost to fight off on the display shelf, but I can't complain about receiving more GB equipment. I wondered how a snap-on slime spray, a lá proton stream included with Venkman, would have turned out and whether or not Mattel would make one. I don't think anyone's asked about it, so I may have to pose that question to them when I have a chance. 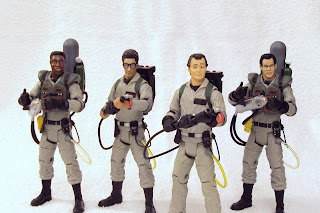 Once again Mattel's delivered a great Ghostbusters figure and renewed my faith in the line. I'll admit that the initial reveal of SB Winston (along with the exclusive "Marshmallow Mess" Ray) soured me on the Ecto-1 subscription last year, which I originally intended to buy, but the fact that Mattel eventually reworked the figure makes me hopeful of signing up this year. I'm really looking forward to the reveals next month and hope there's enough great stuff coming to keep people interested in the line. As for buying the October release of Slime Blower Ray, I'm not sure if I'll pick him up or not, yet. He'll include the "Cinema Ghost", but that's not exactly a must-have for me, so I'll wait and see what else is on sale that month, then decide. At least I'll know the Slime Blower is awesome.
Posted by 3B at 1:34 AM