Back in March, Mattel released a series of action figure two-packs pitting current and former WWE Superstars (from WWE Elite Collection and WWE Legends, respectively) against each other. These packs were meant as a tie-in to the WWE All-Stars videogame and to-date contain only 1 wave of two-packs. Here's a look at one of the sets featuring two popular grapplers. 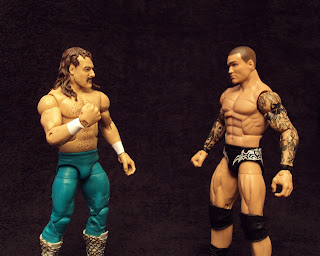 Thanks to the heavy reuse in these sets, Mattel and/or TRU were able to price them cheaper than the previous TRU-exclusive twin packs of WWE Legends. This two-pack features Jake "The Snake" Roberts versus "The Viper" Randy Orton. See the connection? No? Well, Mattel did and that's why we got two of the most skilled "psychological" combatants to ever enter the squared circle. First up, let's take a look at "The Snake."

This is Mattel's second version of Jake Roberts, the first one appearing in series 2 of WWE Legends. The sculpt is identical to that figure right down to that sly sneer below the awesome mustache. Sure, the figures features a bit more muscle definition on his torso than Roberts had, but these are action figures after all, so a little exaggeration is warranted. This time around we get Jake in his teal tights featuring a stylized portrait of himself as Medusa on the left thigh. This is a costume I'm much more familiar with than the flame/cobra tights on the previous figure.

Like Jake, Randy is identical to his previous, Elite Collection series 2, figure. The only changes are in the color of design on his tights. I like the white designs much better than the blue of the first figure. The only thing that would improve this figure is a head swap with his soon to be released Elite 9 figure. The expression on this figure is somewhere between bewildered and blank. The fact his eyebrows were painted unevenly adds to my dislike of the sculpt. 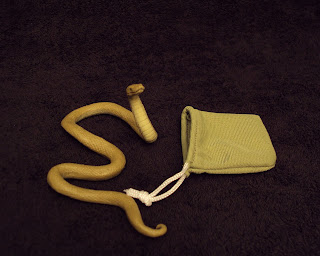 The set also included two accessories: a sack and Jake's pet python, Damian. While I only slightly remember the cobra Roberts carried around 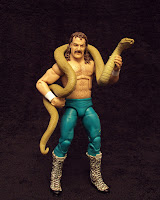 (and was featured with his previous figure), I remember Damian quite vividly and I think many fans do, too. Jake would haul the large reptile to the ring in a green sack, where he stayed until released upon the body of a freshly defeated opponent. Damian is molded with a hard rubber making him flexible, yet able to maintain his shape. Thanks to that shape you can display the snake stretched out or wrapped around Jake. The second accessory, the sack, is a "working" sack, allowing you to store something in it and tightening the rope will cinch it closed. Unfortunately, it's too small to hold Damian and his flexibility isn't enough to let him conform to the inside of a sack. However, it still looks good flung over Jake's shoulder as you can see in the pic above. I'll probably toss a cotton ball or two inside to make it bulk up a bit. 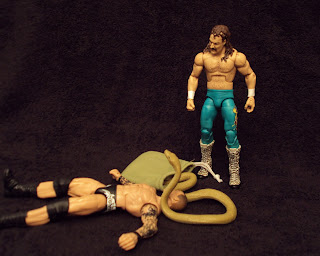 Both accessories are for Jake "The Snake", meaning Randy got shafted. I'm glad they included these pieces for Roberts because they're the quintessential carry-ons for his character. Plus, he was shafted with his Legends release. Poor Randy got nothing this time around, but when you consider the most they'd give him is another t-shirt, I don't mind both accessories going to Roberts.

The WWE All-Stars two-packs are currently a Toys R Us exclusive, but seem to be coming to online retailers (and possibly other brick-n-mortar stores) soon. When they first arrived in March, they were $24.99, but have since gone up a dollar. I picked this set up in April when they were on sale for $17.99! That's pretty awesome considering TRU currently sells single Elite/Legends figures for $16.99! Now through June 11th, you can score a free WWE Legends two-pack with any WWE purchase of $25 or more. At $6.50/figure, it seems like the perfect oppurtunity to grab a set of these All-Stars!
Posted by 3B at 9:45 PM