Just in case you haven't already noticed, Mattel created a third WWE collector line that actually replaces the WWE Entrance Greats series that debuted last year with the launch of WWE figures. The new line dubbed "WWE Defining Moments" enchances the EG figures by adding Elite/Legends-style articulation. Since it's debut just before the start of 2011, Mattel has released 4 waves with two figures each. Today we're taking a look at one of the most anticipated and fantastically executed releases so far, Ricky "The Dragon" Steamboat. 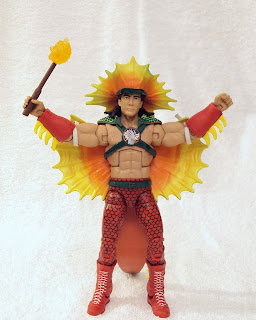 Ricky Steamboat delivered some of the most classic matches in WWE and professional wrestling history in the late '70s and through the '80s, eventually retiring from regularly performing in the '90s. His "Defining Moments" figure captures his return to the (then) WWF in 1991 after leaving a few years earlier. Steamboat completely embraced his nickname, "The Dragon", appearing in this outlandish costume during his entrance which included spewing fire from his mouth while standing atop a turnbuckle.

His entrance attire is made up of several removable pieces which are mostly molded in a light green plastic. While there is extensive paint applications added to the costume pieces, the sculpting is phenomenal. All the "dragon" skin features a scaly texture that is enhanced by air-brushed greens and yellow. The headress simply fits over the top of Ricky's head like a hat. The chest harness is attached to the "wings" at the base, with the top straps slipping over Steamboat's head and plugging to a peg at the top of the wings. 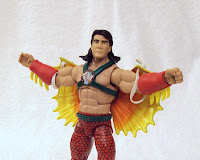 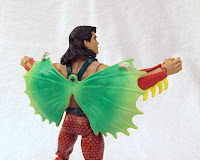 Each wing features an elastic band that slips over Ricky's arms. They're quite loose, but I think you can tighten them by adjusting the knot behind each wing. The dragon tail/back has to notches that grip the center part of the wings where they are joined together. The flexibility of the dragon tails allows you to bend the lower half, freeing it from the wing harness, then lifting it off the top part.

The waist belt is a completely separate piece and simply functions as a decorative accessory mimicking the actual costume. Each of the forearm dressings are molded with a slit down their length, simply fitting over each arm. The boots are molded in red with white paint used to detail the laces and soles. The spikes on his lower legs are molded on to each boot. Each boot also features the same image as seen on the chest harness' center medallion. 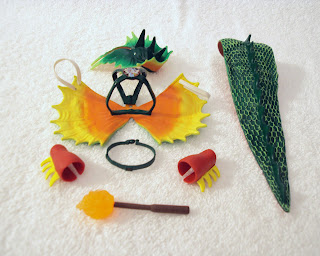 Above you can see all of Ricky's accessories including his flame wand. That accessory is molded in a translucent plastic to imitate the "flame", with the handle and shaft painted brown. All of the pieces feel durable and don't seem like they could break easily, however the harness can be a bit tricky to remove/replace, so you'd do good to take your time with it. 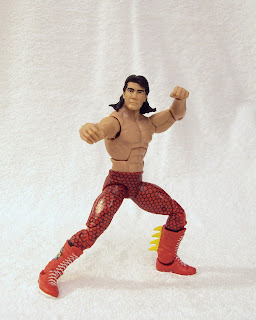 Once you remove that crazy-awesome dragon suit, you have another excellent Ricky Steamboat figure. Although he tied his hair into a ponytail during this particular defining moment, the figure features a wild mullet coming down just above his shoulders. I don't mind this inaccuracy because I think it ended up looking better and I'm sure he's worn his hair this way at some point. This figure borrows almost totally from Steamboat's previous WWE Legends (series 1) figure except the new head sculpt and spiked boots. The scales on his tights are painted on with computer precision and they've gove as far as to paint the details on the pins holding his legs and knees together. Articulation is the standard for the Legends/Elite figures and, thanks to Ricky's slimmer frame, he has a better range of motion than the bulkier figures. 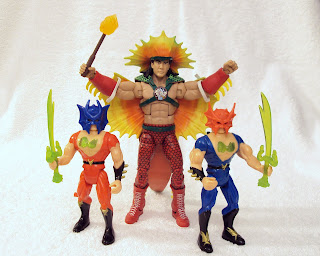 Ricky Steamboat: Grandmaster of the Dragons!

This version of Ricky Steamboat was another must-have WWE figure for me. I ordered mine from MattelShop.com, but I've already seen him at local Toys R Us stores. WWE Defining Moments showcase an impressive level of detail and authenticity, but you definitely pay a premium. At $22.99 ($25.99 at TRU), they're expensive, however the quality of the product is worth it. I can't afford to collect the whole line, but when a favorite wrestler comes along, it's something a make room for in the budget.

Look out for a review of my third DM purchase, The Undertaker, coming up soon.
Posted by 3B at 12:22 PM