Hey all, it's Novelty from Toy a Day, and I'm doing another guest review on this great site.  It's been a while since I've done a guest review here, but 3B has this open door policy where I'm always welcomed it seems.  Anyways, I don't have an insect themed figure to review today, but I do have something yellow from the Sinestro Corps.  Yup, Swarm to read more. 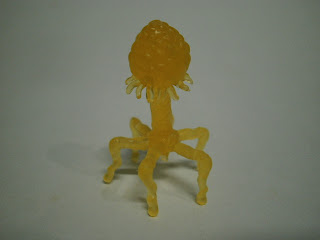 Despotellis is part of a three pack, and this is one third of the review.  The main body of this review is back on my blog, and the third part is on A Year of Toys. I do have to confess that it was 3B's "Currently on Display" posts that drove me to buy more Lanterns to display, although I know I'll never have displays that look as great as 3Bs... for the simple fact that he has got great custom figures. 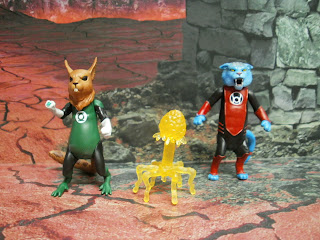 Despotellis comes in a three pack with B'Dg and Dex-Starr, and unlike the other two figures, he's just a lump of plastic with no articulation.  There is a lot of details on the sculpt though and that sculpt does look amazing.  He's supposed to be a sentient virus, although I have no idea if this sculpt is a ring construct, or whether it's supposed to represent the virus itself. 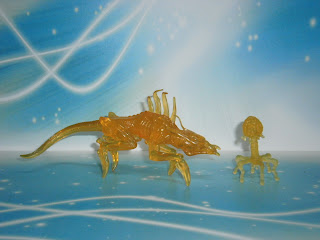 The plastic is a bit translucent which gives it that rather creepy ring construct vibe, although he/it is a bit paler and less glossy than the doggie that came with Karu-Sil.  I tried looking for the yellow ring that he's supposed to wear, but I couldn't find it.  Perhaps it's there and I just suck at hunting down a yellow ring on a yellow body. 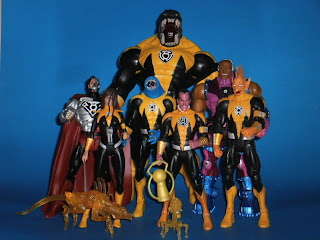 Still, there's no denying that he's a nice addition to the Sinestro Corps, eventhough he's a bit small in there.  My Sinestro Corps collection/display isn't as awesome as 3B's, but I like how it is build up.
Posted by Novelty at 12:19 PM