CM Punk may have left the WWE after last week's "Money in the Bank" pay-per-view, but he went out on top, defeating John Cena for the WWE Title in the main event. I wasn't able to watch, but I followed the play-by-play online and being that the show took place in Chicago (Punk's hometown), the atmosphere was electrifying. Today, I'm taking a look at the much-anticipated masked Punk figure from Ringside Collectibles.

The figure (Punk's 4th in the Elite/All-Star lines) captures Punk's look from last Summer when he lost a match during his feud with Rey Mysterio, the stipulation being that he would have to shave off his long hair. Punk was set to debut his shaven head on SmackDown! the following Friday. He appeared on stage with a white towel draped over his head, but when he removed it, he revealed a custom mask completely covering his head and most of his face. He was sporting this look when I attended Monday Night Raw last year and right away I knew this would make a really cool figure. Little did I know, Mattel would go as far as to make the mask removable. 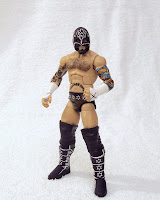 Off the bat, this figure is sculpted the same as all previous Elite CM Punk figures, but includes a brand-new head sculpt (finally!). He even includes the white elbow pad on his right arm like his Elite 6 and All-Stars figures. The mask is done really well and looks even better in person compared to the images Ringside Collectibles released. Based on the preview pics, I anticipated the mask being loose on Punk's head, but it actually fits snuggly and is much more streamlined.

Punk's still sporting his starry tights, but this time around they, along with the boots, have a camouflaged background. The boots also feature "S-E-S" along the sides of the kick pads, initials which stand for "Straight Edge Society", Punk's former faction. The paint on the mask is nicely applied inspite of being a white design over black plastic. All of CM Punk's tattoos, minus his trademark-infringing shoulder tats, are once again highly-detailed and well-applied. This figure is from a time before his massive chest ink, so you won't find that on here, instead he has a full crop of chest hair painted on. He's still sporting "DRUG FREE" across his knuckles, which I believed were going to be nixed moving forward, but that may just be for the kid-friendly Basic figures.

Punk's new head sculpt features a bald head, sculpted beard and a stern expression on his face. His hair is painted in a light brown color, just a bit darker than his skin tone, effectively creating the appearance of buzzcut. The beard features a long goattee that extends nicely beyond the uncovered mouth portion of his mask. 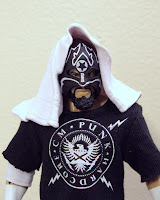 Along with his mask, Punk includes a splint for his right arm and a white towel molded into a hood. The towel doesn't quite fit over the mask. If it looks familiar to you, it's because it was previously included with the Elite 4 and RC-exclusive Kane figures. It fits just as well on Punk's bare head as it did on those figures. The splint is a little tricky to remove and replace, but it fits nice and accomodates his right arm with or without the elbow pad, which is also removable.

Any fan of CM Punk should be pleasantly satisfied with this figure. I can say that this was a figure I wanted before it was even announced, so having it in hand is fantastic. If you read my review for the masked Kane, you know I love figures of any genre with removable masks and Punk's no exception. I absolutely love the look of the mask and the camo gear. So far Mattel's delivered some great exclusive figures, especially for Ringside Collectibles. 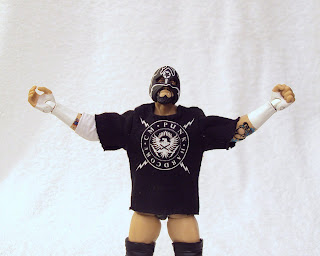 I don't know what RC has coming down the pike next, but I'm waiting on the TRU exclusive McMahon figure. You'll still have time to obtain your own VinnieMac figure, so if you don't know how follow this link for more information. I received my confirmation from Mattel last week, so he should be coming in September or October. 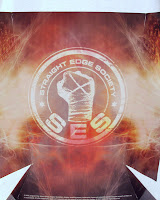