Spear! The R-Rated Superstar returns to the Elite Collection in what is most likely his last figure in the wrestling collector line. While Elite series 9 is hitting stores like Toys R Us, I have yet to see any series 8 figures at retail. I had to order this figure from Amazon.com last month. It's the first Edge figure I purchase from Mattel's Elite Collection line, was he worth the wait and does he live up to the legacy of this now-retired WWE Superstar? Let's find out! 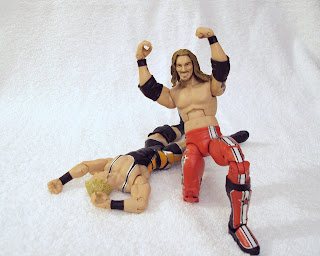 Edge was part of the first wave of Elite figures back in January of 2010. I skipped buying him because I've never been a huge fan of his and the repetitive black attires on the Elite figures turned me off to that version of Edge. I decided to hold out on adding the R-Rated Superstar to my collection until an alternative choice was delivered. This series 8 version appeared over a year later. 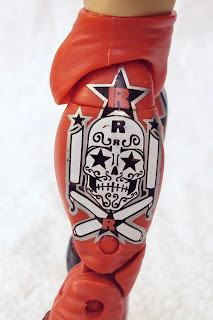 As you can see he's sporting red tights with plenty of red and silver details on his boots, too. The E8 figure is built identically to the first release, but adds a brand new head sculpt. I'm not convinced on the this headscan. It kind of looks like Edge if he were wearing a pair of those gag glasses with the big plastic nose attached to them. I think it's the nose that throws off the sculpt because it seems to large. I like the hair sculpt on this figure a lot better than the E1 version. It looks more natural coming out of his head and is short and flexible enough to not restrict the head movement much.

Edge's various logos and tights designs are all applied cleanly with sharp details. I especially like the racing stripes down the left pant legs. His tattoos are similarly well applied on his arms.

"Rise Above" is tattooed on his inside right forearm, but I'm not sure if it was printed upside down or what because if you extend the arm out to his right, with the elbow pointing down, the words are upside-down. They may just be the way Edge's real tattoo is, but it seems incorrect.

I conducted a couple of searches for a picture, but couldn't find anything that clearly shows that tattoo. Even if it's positioning seems a bit strange, it's applied very well and you can make out the words clearly.

His left forearm features a highly stylized cross that Edgementioned was a throwback to the beginning of his pro-wrestling career. Like the rest of Edge's tattoos, the cross is printed with black and red ink without any blurring between the two colors.

Edge's upper arm is adorned with a sylized sun on the shoulder, also in black and red ink. His bicep tattoo is much more complicated and I can't really make out what the image is supposed to be. That may not entirely be the applications fault. There are ribbons or scrolls across the top and bottom of the bicep tattoo, but it seems the lower scroll was purposely left blank. The upper ribbon was the initials "J.E.I.C.G." printed inside, but I don't know what that refers to, or what should be on the lower scroll. 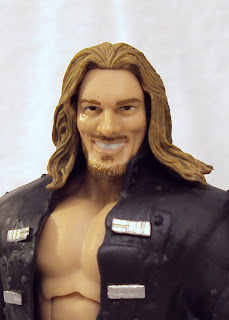 Edge includes two accessories along with his removable elbow pads: his entrance coat and sunglasses. The glasses are specific to Edge and made to fit between his face and hair. I'm impressed with Mattel's continued dedication to detail as every pair of glasses I've encountered in the Elite and Legends lines are unique, even when they could have easily reused a sculpt or two. Edge's coat seems to be a reuse from the E1 figure. Like the coat and jacket on Undertaker and Finlay, respectively, Edge's coat is made of a stiff material that restricts the figure's articulation. The coat has plenty of detail, but it's molded in solid black with only the buckles along the front painted in silver. Some glossy black paint might have helped make some of the details pop a bit more, but considering Edge's coats are usually all black, it's not a big issue here.

In all, I'm happy with the figure, mainly because his red tight's pop out more against the usual black attires used in the Elite line. The face sculpt isn't all that impressive, but wearing the sunglasses kind of helps him look more like Edge. Whether you like this version more than the series 1 figure or not, you'll have to admit it'll be much in demand as Edge was forced to retire due to medical issues. Either way, I'm sure we'll eventually see more Edge figures in the Legends line.
Posted by 3B at 1:10 PM