It's not hard to understand why some Superstars receive more figures than others in Mattel's WWE toy lines. Characters like Rey Mysterio and the Undertaker are popular with kids and adult collectors alike. Today we're taking a look at Taker's third entry in the Elite Collection.

This version of the Undertaker features a brand new head sculpt and new entrance coat. The coat isn't new to the Undertaker's wardrobe, he's worn it to the ring on different occasions, albeit with small variations, for the past ten or more years. It's made of the same stiff rubber as the E1 Taker's coat, however, thanks to being sleeveless, it doesn't hinder his arm articulation at all. There are plenty of sculpted details all around the coat, but the lack of paint makes some of them hard to make out. wavemate, Edge,

Much like this figures the inclusion of some glossy black paint in certain areas would help to bring out the details on the coat. Although there are three straps across the chest, only the center strap keeps the coat closed with a squared peg that inserts into a hole on the right side of the coat.

The only other accessory this Undertaker includes is a removable left elbow pad, just like the other Takers. I wouldn't really call that an accessory, but the fact you can remove it and admire the tattoos on Undertaker's arms is still cool.

The E8 Undertaker finally brings a new head scan for the Deadman to the line and it is awesome. It's Taker with his snarling expression, the one you usually see before he chokeslams someone to hell! This is a huge contrast to the steely-eyed stare of his previous Elite figures.

Body sculpt-wise, this Taker is identical to the E1 and WM26 figures. This time around he features duplicate red and white winged demon skull logos on his thighs. I believe the same logos appeared on the WM26 version, but in blue and white instead. The logos are applied crisply and clearly, my only complaint is that it's a bit too "bright" for the Undertaker. I don't mean the content, just the colors, obviously. 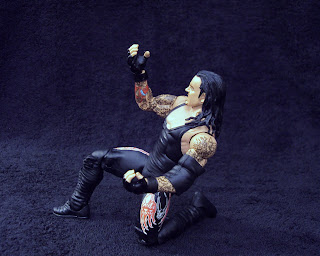 If you've been collecting WWE Elite figures from the start, you know prices have gone up across the board, Toys R Us easily being the most expensive "brick and mortar" retailer. A year and a half ago I bought the E1 Undertaker for $14.99 plus tax and he included a coat, hat, elbow pad and, the now-retired, name tag/display stand. I bought the E8 version on MattelShop.com along with "Defining Moments" Ricky Steamboat, which means I had to pay shipping on top of the $15.99 price. I skipped the WM26 version because all he brought was a crappy t-shirt that he never wore during the event, but the E8 figure offered an awesome new headsculpt and one of my favorite Taker entrance attires. However, after tax we're talking about a $17.50 figure and that's pushing it for what's in the box. Maybe the goal is to make the deluxe Defining Moments line seem like a better deal. Either way, I hope Mattel does more to make sure retailers keep prices affordable for collectors, otherwise we may see the Elite Collection go the way of WWE Legends. 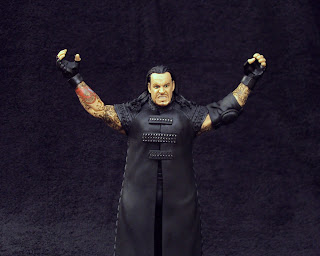