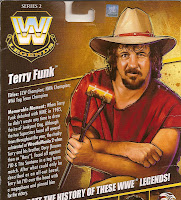 Not considering the soon-to-hit WWE Legends series 6, I've collected all of the Mattel lines legends except for three: Kamala, Paul Orndorff and George Steele. I do plan to eventually purchase those guys, but in the meantime I'm trying to review everything else. I've reviewed most of my Legends stuff, but starting today, I'm making a big push to get everything reviewed and hopefully construct some sort of checklist page. Today, we're taking a look at a legend from series 2, Terry Funk! 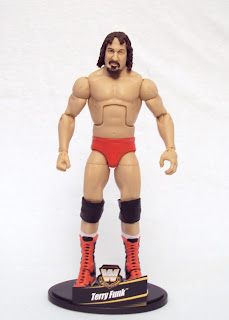 Hall of Famer, Terry Funk's first (and, to-date, only) figure in the historical collector line follows his look in the WWF during the 1980s. Why is he dressed like a cowboy? Probably because he's from Texas and McMahon loved coming up with ridiculous gimmicks for all his Superstars during that time. Personally, I'm a fan of Terry's "Funk U" look during the mid-to-late 90s, and I have my fingers crossed that we'll eventually see that figure made. Maybe in a Legends 2-pack with Cactus Jack, commemorating their epic, and destructive battles in ECW. 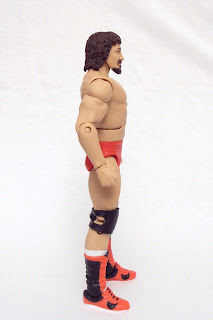 Funk's built around the average-sized body, not flabby, but not overly-toned. It seems appropriate for Funk's look during the '80s. He's headscan looks fantastic, even capturing Terry with a huffing expression. Nothing too complicated about his ring attire, most of the costume details are achieved with paint. The applications all appear crisp without any blurring between different colors on his trunks and boots. 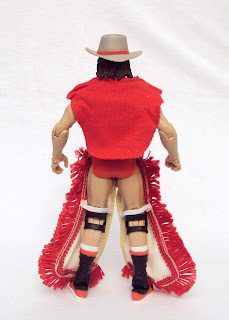 One of my favorite aspects of the Legends line is the design team's seemingly slavish commitment to accuracy and detail. That said, I don't like Funk's entrance attire. I have yet to display him in this get-up. It's not the figure or designers' fault, it's the silly cowboy costume. I'd be embarrassed to come out to a wrestling ring dressed like this. I can't say I remember watching Funk in the '80s, so I have no idea what the crowd reaction was to this attire.

Disregarding my disdain for the cowboy look, I will say that Mattel's dedication to delivering great figures continues with the accessories included here. Terry's cowboy hat is molded to fit his head specifically. The shirt is basically a piece of cloth with a hole in the middle to fit Funk's head through. It looks correct to the images on the package. The chaps, even though completely tacky and absurd, are impressively constructed. Mattel used a faux leather material for the main parts, adding red silky frills all along the seams. The chaps stay on with the help of elastic bands at the waist and knees.

While carrying a lasso would be the logical accessory for cowboy, Funk came to the ring with a branding iron and Mattel delivered one with the figure. Looking at the image, I can't tell of the branding is supposed to be Funk's initials or a specific symbol, but the accessory look just like it, minue the red-hot, glowing end. It's a bit tricky to have the figure hold it because Funk's right hand is balled up into a fist and his left hand is too opened to hold the iron by the handle. A thicker handle or a tighter grip on the left hand would have solved that problem.

All in all, he's another faithful replica of a WWE Legend and fans of the '80s WWF era, or Funk fans in general will probably be happy with this figure. I had no intention of buying this figure, and you may be asking "why not?" Well, the only reason I bought him was because I found him on clearance at Target several months ago (click the image to the right to enlarge). He along with a few stragglers from the first couple of waves were on sale for $3.72! That's crazy! And you'd have to be crazy to pass up on a deal like that no matter what crazy costume the figure's wearing. That day I grabbed Funk and a second Sgt. Slaughter, which I planned to customize, but have yet to. Currently, all the Toys R Us stores in my area have lowered the price of Legends figures from $14.99 to $12.99, selling them for less than all the other big-box retailers in town. I should also mention that those TRUs have received stand-alone display boxes with Elite series 9 and Legends series 5, along with the Mr. McMahon figure promotion. So now may be a good time to pick up some of the figures you may have missed, or skipped. 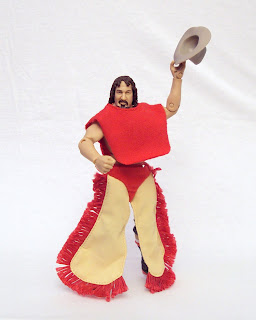