I recently announced that I was collecting Transformers figures again for the first time in several years. Prior to this past July, my last Transformers purchases were from the 2007 live-action film. Those included a Leader class Optimus Prime and Deluxe versions of Bumblebee and Barricade. I still have Prime. Then I stopped cold turkey. I remember when the "Classics" line started out, but I refused to purchase any of them because of one thing: Optimus Prime didn't include a trailer. "Blasphemy!" I shouted at the Toys R Us clerk, before I marched out of the store. It wasn't until years later that I realized the error of my ways...

In fact, it would be nearly five years later. Since I refused to buy any TF toys, I wasn't on the "up and up" with what was being produced. Imagine my surprise when I learned that there were 3rd party companies making accessories and figures to enhance the Classics line. Among them: a trailer for the Voyager class Optimus Prime. And the trailer I ended up purchasing isn't the only one! There's also a very faithful update of the classic Prime trailer by FansProject (remember that name). I studied both of them thoroughly online before deciding on the BTS version. For the sake of the review, I'll just focus on what this one has to offer and not comment on the FP version for now. 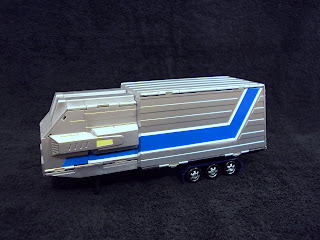 Right away you'll notice the trailer isn't the plain old box trailer G1 Optimus was hauling. The back end is squared, but towards the front it has a much more techy look. The first time I saw it I was immediately reminded of this tractor trailer used to carry around the Unisols in the classic Jean Claude Van Damme film,Universal Soldier. I think the exterior sculpt is much more in line with what the TF Classics toys are all about; familiar designs with modern stylings. There's no mistaking what it is or who it belongs to, but it received a more modernized look instead of being a retro design. 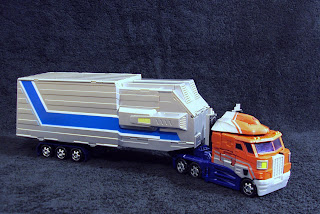 The trailer features six wheels paired up near the back end, but upon closer inspection you'll learn that it's actually the "rollout drone" or, in G1 talk, Roller. He actually pulls double duty, carrying the trailer when he's not scouting areas for Prime.

Roller attaches to the bottom of the trailer via two pegholes that fit the pegs beneath the trailer. The wheel sections on each side of the drone extend to fit just under the side walls of the trailer and restract to give the drone the classic vehicle look. When Roller is detached, you can flip down two stands under the trailer to keep it propped up and allowing the tailgate to drop down and form a ramp into the cargo hold. 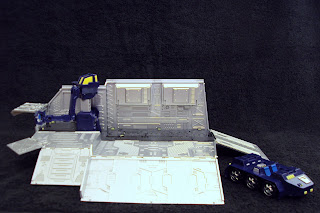 But the outside of the trailer is just the beginning of the awesomeness. True to the classic toy, this trailer opens up into a command base, only this one has a few twists. First up, instead of the traditional split along the center of the trailer, the BTS version opens up into various levels and platforms with the right side wall remaining in place while the others extend the main "floor" and create two ramps along the left side. There's also a small landing platform for some kind of flying machine, however it's much too small for anything bigger than a Scout class. 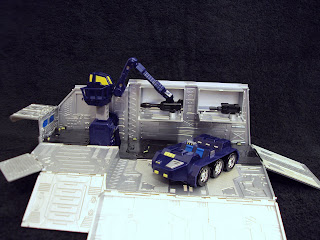 The static wall also has two compartments that store one weapon each. The blasters are included with the trailer and fit perfectly in Prime's or other figures' hands and the pegholes on the drone. I like the small one for the Reveal the Shield Bumblebee since he doesn't have a weapon of his own. 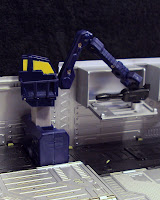 BTS also added an articulated crane inside the trailer. It's not as versatile as the G1 trailer's, but is a nice touch. The joints in the crane arm are really loose on my trailer, it just keeps falling down unless you prop it up against something. Also, the design of the crane makes storing it inside a bit tricky. Instead of being able to fold it down into the front end of the trailer, you have to swivel it around then flip the top portion back on to the storage area. It minimizes the space inside the trailer when it's closed and leaves a large portion empty in the front. I think there is some kind of upgrade that replaces the crane, but I'm not ready to invest in that, yet.

The paint applications on the trailer are very minimal and leave a lot to be desired since there aren't any stickers included with the set. Most of the paint apps are reserved for the outside of the trailer, making up the blue and white stripes along the sides and the yellow lights towards the front of the trailer. There is yellow paint on a few "lights" inside the command base, as well as the "windows" on the crane. The trailer is molded in a fantastic silver color which helps the BTS version stand out from the classic version that much more. Although BTS doesn't include stickers with all those crazy schematics and detailed readings the G1 had, Repro Labels comes to the rescue to offer a sticker kit that effective delivers the classic decals in a modern form. I ordered a set and have applied it to the trailer, but I decided to write a separate review on that one and compare it to the classic version. Keep an eye out for it. 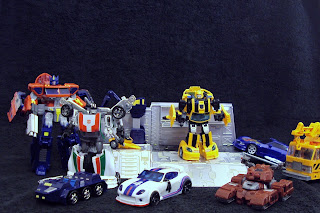 I'll admit that even though I hate the fact Michael Bay added flames to Optimus Prime, watching OP haul his trailer in Dark of the Moon stoked the flames of nostalgia. I decided I needed a modern Optimus with trailer and I started looking into the "Ultimate Optimus Prime" that was released in support of the new film with the intent of customizing the cab into the classic G1 color scheme. That badboy is pretty expensive and I figured I'd have to hire a pro customizer to airbrush it because my paintbrush technique wasn't going to cut it for transforming robot. However, I looked into "Classics" Optimus and then the BTS trailer and I figured it would cost about the same or slightly less to go that route. I picked up Classics OP and Megatron for under $100 on ebay, then ordered the BTS trailer from TFSource.com (via Newegg.com marketplace) for $59.99 shipped. I think TFSource forgot they had items listed on Newegg because they sell the trailer on their site for $56.95, plus nearly $15 for shipping and soon after my order, the trailer was "sold out" on Newegg. 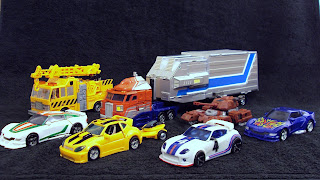 Stay tuned for more TF-related reviews, including more 3rd party items like FansProject's not-Insecticons and TFC Toys' not-Devastator!
Posted by 3B at 12:45 PM