Fans of Hasbro's G1 Transformers have enjoyed fantastic updates of classic characters for the past several years, spread among various lines (Robots in Disguise Classics, Universe, Reveal the Shield, Generations, etc.), but some figures have been poorly represented and in some cases, not at all. The good news is that various upstart companies, mostly operated by fans, have been producing great add-on kits and even completely new figures to enhance our collections. Among them is FansProject, possibly best known for their awesome City Commander upgrade for the "Classics" Ultra Magnus. Today we're taking a look at their first figure in series dedicated to those G1 miscreants, the Insecticons. Here is Thundershred! 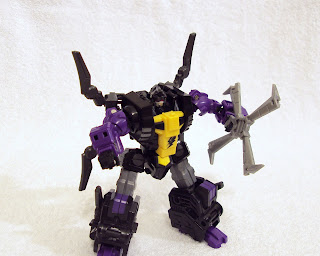 Thundershred is only my second FP purchase behind their Protector kit for Rodimus (and I promise it will be reviewed soon!). Let's not beat around the bush folks, this is a toy of Shrapnel, the leader of the Decepticon subgroup the Insecticons. However, because FansProject is not licensed by Hasbro or Takara Tomy, the toy is named "Thundershred", which sounds pretty awesome to be honest. I can't identify each Insecticon simply by looking at them (I always get them mixed up), but thanks to Transformers Wiki, we know that the robotic stag beetle is Shrapnel. Thundershred is an homage to Shrapnel in the same way the Classics and Generations Transformers are homages to many G1 toys and characters. 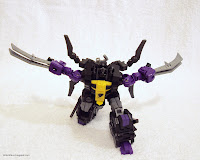 I'll admit that as a little kid watching The Transformers in the '80s, I hated the Insecticons. Partly because they were part of the dastardly Decepticons, but mainly because they turned into insects which creeped me out. I didn't even want to play with their toys! Also, in my little boy mind I thought all the TF subgroups (teams that always appeared together) were supposed to merge into giant robots (think Constructicons, Aerialbots, etc.). I let the DinoBots slide (after all Grimlock is my second favorite TF character), but resented the fact that the Insecticons did not combine, were smaller than many other TFs, were only a trio, but still managed to cause all sorts of trouble for the Autobots (sometimes the Decepticons, too!).

Today, I'm happy to say I think the Insecticons are a fantastic team in the Transformers mythology. They're small, but crafty and resourceful, making them a force to be reckoned with. FansProject obviously noticed these traits and embraced them, turning the Insecticons into an almost ninja-type squad (the stealthy colors and weapons are dead giveaways!).

Out of the box you'll notice Thundershred is a rather stocky fellow. His torso almost looks like a solid block of plastic. That doesn't help the fact that his head is a bit too small. There is plenty of beautifully sculpted detail on his face and the rest of his body. The claws on his forearms are detachable, not just the blades, but the piece they plug into. This is by design as detaching the claw gauntlets is part of the transformation. There is very minimal paint on Thundershred since most of his parts are molded in either black, purple, yellow or grey. The few spots that do have paint are all clean and slop-free. FansProject can't use the Decepticon symbols, so they created their own to adorn T-Shred's chest with. It's a rather basic logo featuring two lightning bolts. Nothing an order from Repro Labels can't fix. 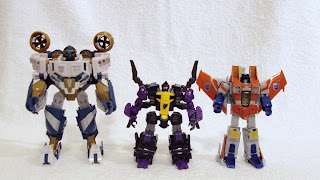 Thundershred's appearance looks menacing, but it's no thanks to his size. He's a short Deluxe figure, hovering below Universe Starscream, who himself isn't very tall. Shred's dangerous appearance is attributed to lots of jagged edges poking out and his use of large, bladed weapons. 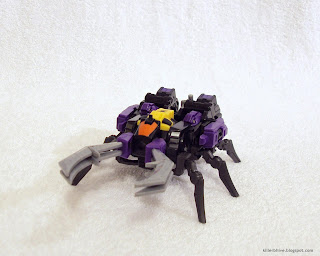 If you're not wowed by "not-Shrapnel's" stature, don't worry because he truly impresses in his beetle mode! While many Transformers tend to shrink when they convert to their alt modes, Thundershred retains most of his bulk and ends up looking bigger than most figures in his size class. 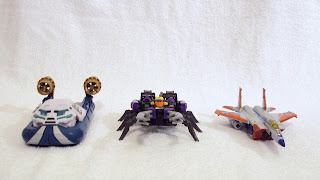 In bug mode, Shrapnel even gives some Voyager class figures, such as Sea Spray, a run for their money. I think any heroic bot would think twice before confronting this beetle one-on-one. I'm eager to get my hands on the other not-Insecticons as they appear to be a bit larger than Thundershred. 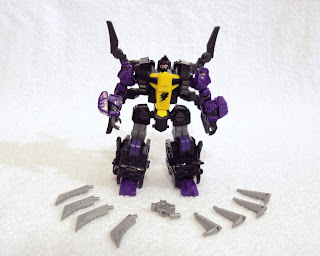 As for weapons, Shred's a total knife-nut. He includes four large blades that can be affixed to his forearm gauntlets, two on each side, and double as his beetle pincers when in bug mode. 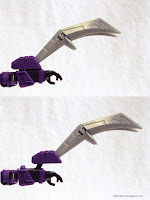 Each of the blades can be broken down into two parts: the base blades (with a right-angled spike at the end) and the broad blades (the end half of the combined blade). The blades attach to the each of his arm gauntlets via small, side-by-side slots and the gauntlets can be swung forward to extend Thundershred's reach. 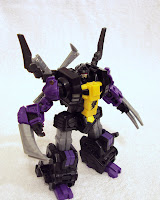 Both sections of the blades feature identical size pegs, so you have a few options on how to arm Thundershred. I like just using the broad blades, they give him a very Wolverine quality to him, but the full blades look wicked, too.

The remaining four base blades can then be attached to a handle allowing Thundershred to wield them as a handheld weapon. You can still add the larger blades to the smaller blades while they're attached to the handle, making it a massive quadruple battle blade. The combined weapon can attach to Shred's back when not in use and while in bug mode, the leftover handle fits on the inside of the body. 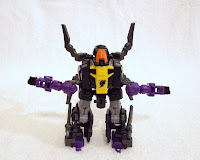 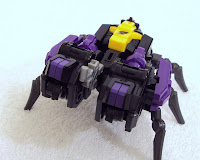 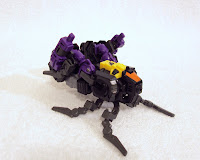 Thundershred's conversion to beetle mode isn't overly complicated, but it can be a little tricky due to his arms tucking inside his lower legs . The photos above serve as a reference on the easiest way I found to do it. You have to line up the various arm sections in a way that you end up with the elbow joints facing down, allowing the arm to bend as if it had a double-hinged elbow. This allows you to curve the arms as they enter the "boot" sections that flip over the upper legs. The picture on the right also shows where the handle for his blade weapon stores while in bug mode. 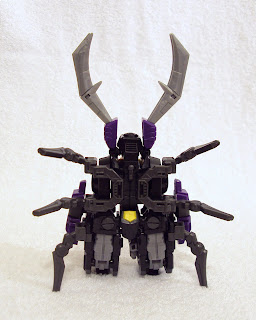 Thundershred has plenty of articulation, even better than certain mass-retail lines based on superpowered characters (wink, wink). FansProject has utilized several ball joints all around the figure: head, elbows, hips and all of the "beetle" legs. The joints are all nice & strong on Thundershred, but his hips are really tight. That may be good for the long-run as action figure joints tend to loosen up over time and it doesn't seem the joint will break easily thanks to the excellent quality of plastic used in creating TS. 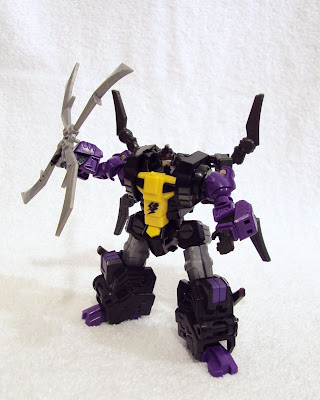 Thundershred is the first in a series of three, the other two figures, Stormbomb (G1 Bombshell) and Backfiery (G1 Kickback), are scheduled for release over the next couple of months. At nearly $50 each (before shipping), I'd consider these to be expensive items, but inspite of their "unofficial" standing, they're awesomely made and fit into the Classics/Universe/Generations lines perfectly. I'll be adding the rest of them in order to complete the original team of Insecticons. If you're thinking of buying Thundershred, but have a concern, feel free to post questions and I'll gladly answer them for you.

I can tell you for certain Thundershred is one bad bug, bug.
Posted by 3B at 1:50 AM