As promised, I'm revisiting this month's "Currently on Display" with a few revisions, the main (and biggest) being the addition of Battle Cat in the heroic Masters shelf. You'll also get a look at the FansProject upgraded Rodimus Prime! 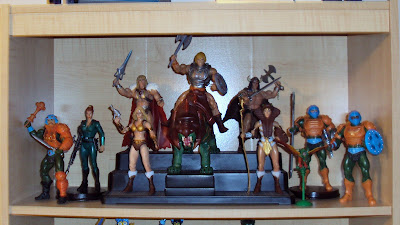 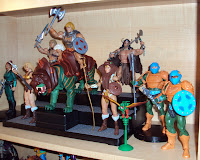 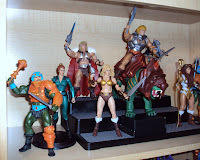 With Matty's "All-Star" sale in July, I finally had the chance to add Battle Cat to my collection, unfortunately I couldn't add Panthor as well as he sold out quite fast. BC is truly an amazing figure, I can see what all the excitement was about last year. To make space for him I removed Prince Adam and Orko from the display. Orko ended up on eBay and he now has a new home. Since Capt. Glenn was the only SDCC item I ended up buying she was quite expensive shipping on her own. I'll admit her cost took a lot of the excitement out of the figure, but once she arrived and I was pleased with her. I don't care for the Queen Marlena look, but her space explorer outfit is all sorts of awesome!

I'm considering selling off Prince Adam along with Cringer, hopefully recouping the cost of Capt. Glenn, but I haven't decided, yet. I don't care much for the alter-ego aspect of He-Man and the Cringer figure isn't anything spectacular. I'm sure selling the off together would be the only way to go. Time will tell... 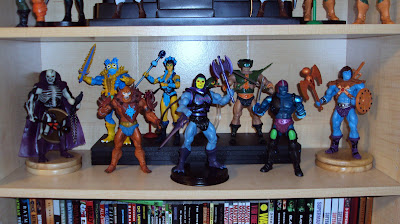 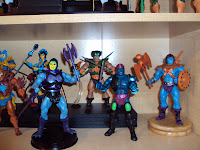 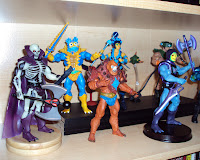 The evil Masters got a shake-up, too! I wanted to streamline the display and make more of the figures clearly visible with more weapons prominently displayed. I removed The Faceless One and Webstor to free up some space. I really like Scareglow with the Dread Axe of Darkness and Tri-Klops looks extra killer wielding dual long swords. I also like the "fully armed" look of Faker and BA Skeletor, but Kronis, Beast Man and Mer-Man suffer from the open hand syndrome which restricts them from holding a second weapon. I think the most menacing looking one out of those three is Kronis, he's looking quite dastardly here. 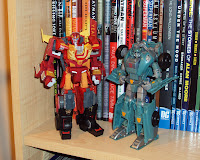 On the third shelf is a figure I believe is one of the neatest toys ever and is so much fun to play around with. It's not so much the Reveal the Shield Rodimus from the Battle in Space set, but the FansProject "Protector" upgrade kit, which turns your Classics Hot Rod figure into Optimus Prime's successor, Rodimus Prime. But it's not just armor you stack on to Hot Rod, it also converts into his "space Winnebago" mode when combined with the battle station. I also added a Repro Labels sticker kit to better tie-in Hot Rod's bright red coloring with the more Classics-friendly burgandy on the Protector set. It's all very cool and I'll have a review of it soon. R-Prime is accompanied by his right-hand man (and very cool toy in his own right) Kup from the Generations line. 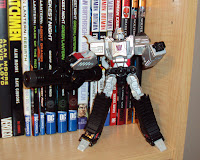 On the other side of the shelf is my very first Takara Tomy purchase, Transformers: United Megatron. I did buy the Classics version last month when I picked up Optimus Prime, but I didn't realize how ghastly the color scheme was until I had him in hand. I did some research and really liked the colors on the United Megatron much better, their much more G1. 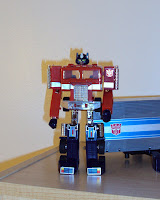 Optimus Prime in his G1 and Classics incarnations is still holding down the top of the display case, but this time around in robot mode. The Classics Prime also received an upgrade thanks to Repro Labels' "Classics Autobots" decal kit, plenty of chrome detailing and Autobot emblems for the shoulders. The kits available from Repro Labels are really nice, I've already bought a bunch of them for newly acquired TFs including: Hound, Tracks, the Protector trailer and BTS Toys' Optimus trailer. I'm hoping they come up with a set for FansProject's Thundershred, too!

And THAT is it for August! I don't know what's on tap for the next edition of CoD, I'm really digging this '80s love display, so I may stick around for a while longer. Plus I have Man-E-Faces coming in and may try to fit him into the display, as well. As always, thanks for looking!
Posted by 3B at 2:05 PM