Okay, I wasn't able to get my July display posted, so this month I'm showing off what was on display last month, then halfway through August I'll post an update with the revised display. I say "revised" because it hasn't changed all that much, save for one BIG addition. We'll get to that in a bit, but now, let's see what's on the shelves! 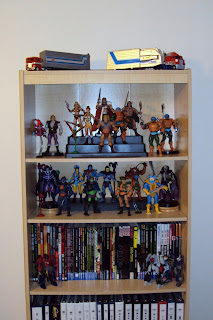 At first glance you'll see this month's display features two brands that aren't showcased too often on the Hive. I'm glad to finally have enough Masters of the Universe Classics figures to fill out the bookcase display areas. Also, with my interest in The Transformers renewed, I'm displaying classic and modern versions of my all-time favorite TF character, Optimus Prime. 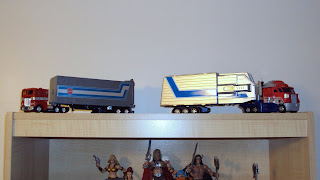 Proudly crowning the bookcase are: 2002 Commemorative Series, G1 Optimus Prime and the modernized "Classics" Prime hauling the BTS Mobile Command Base trailer. What can I say about Optimus Prime that would add to the character's well-known legacy? Nothing, really, except that the G1 Optimus is my favorite toy of all-time. I never owned the original from 1984. My first Prime was the later "Power Master" version, which I loved, but knew wasn't the same as the original. Then when the G2 toys started coming out, my grandfather bought me the OP with the black trailer. I loved that toy and it served me well for many years, until he was passed along to a distant relative. When Toys R Us offered the commemorative series in 2002, I couldn't pass up on owning a classic version of Optimus and I've had him ever since.

The "Classics" Prime is solely responsible for me skipping the entire G1 revival in the mid-2000s. I could not believe they released a cab-over-engine OP WITHOUT his trademark trailer! It wasn't until recently that I discovered all the awesome third party, non-licensed, companies making accessories for this fantastic line that I finally hunted down Prime, the BTS trailer and a shitload of Universe/Classics transformers. Prepare to see a lot more TF stuff on the Hive! 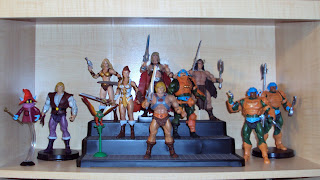 [From left to right: Orko, Prince Adam, Zoar, Battleground Teela (I haven't come up with a name for her, yet), Teela, King Grayskull, He-Man, Man-at-Arms, Vikor, Lt. Klamp, Pvt. Lionhead]

While I was never a huge He-Man & the Masters of the Universe fan, I did watch it with my brother (who thought he WAS He-Man) and of course, loved the toys. Because of that I've been nit-picking the line since I was turned on to it in the Fall of 2009. I feel I've now reached a level where my MotUC collection is nearly complete (I'm still missing a few "must-haves" and the occasional cool character that pops out of nowhere) and I'm proud of the display possibilities. 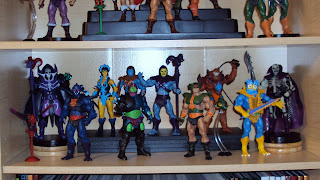 My favorite part of MotU are the often ridiculous evil masters. Skeletor's lackies just appealed more to me than He-Man's goody two-shoes cronies. I'm pretty sure these are all the badguys I want from MotUC, but I can never be sure because Matty always has a few surprises throughout the year. I'm not too thrilled with TFO, he's top heavy and I had to do the rubberband trick on his ankles to keep him from falling down. Novelty has convinced me to hold off on selling him until Battleground Evil-Lyn is released. She's looks wicked cool!

More Transformers goodness on the third shelf in the display case. It's 100% Cybertronian boom-boom with Optimus Prime on the right, Megatron and his right-hand robot, Soundwave, on the left. You may remember I purchased Cyber OP last year along with DCUC Negative Man. I never got around to reviewing him because I transformed him once, thought it was too complicated, and left him in a drawer in my nightstand until about two months ago when my daughter found him and was playing with him. I thought I'd "wow" her by transforming the little red armored truck into a robot. 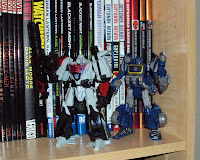 It wasn't as hard as I remembered it to be and after reviewing the instructions (which I always keep for any TF), I got the hang of it. That's when I thought it would be cool to add WFC Soundwave and, of course, WFC Megatron. I was able to find them at Walmart with minimal fuss and have enjoyed them, too.

I haven't played TF: War for Cybertron, but I totally intend to whenever I find it at a low sale price (I try to stay away from videogames whenever possible because a good game can become very time-consuming. That, and blood clots). 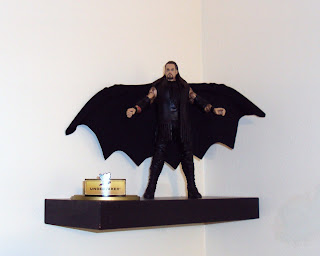 And finally on the wall shelves we have the latest Undertaker figure and the return of the Ghostbusters. The Undertaker comes from Mattel's deluxe WWE Defining Moments series and is decked out in Batman-like attire. This is another crazy/weird/awesome attire for UT and he will be reviewed on the Hive soon, I promise! 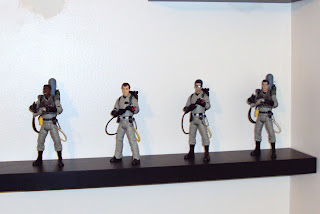 Everyone's favorite paranormal investigators are back and this time around they've harnessed the power of slime! I did a quick forearm swap on Egon, so he'd better match up with the rest of the team, but I'm hoping Mattel eventually updates both Egon and Peter in GB2 garb. These versions are missing the GB2 logo and yellow packs on their belts.

As if this month's edition of CoD wasn't long enough, I wanted to add a few shots of June's Sinestro Corps display which was revised when SC Scarecrow finally came in. There's also another custom SC member added in there somewhere, so look carefully and enjoy! Until next time! 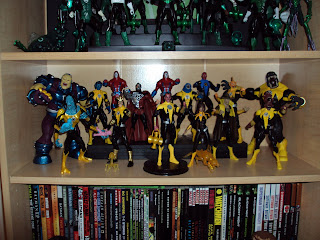