Back in March Toys R Us released a series of two-packs to promote the then-upcoming WWE All-Stars video game. The WWE All-Stars two-packs consist of a set of one WWE Legends figure and a current Superstar from the WWE Elite Collection. Here's a look at Austin versus Punk. 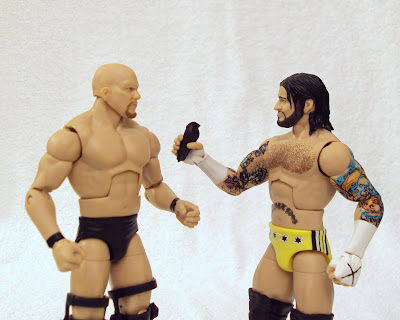 Regarding the sculpting of the two figures, there's nothing new, as the main purpose of this series is to provide previously released figures in new decos at a lower price. The set also features a few accessories to keep things interesting. We'll start things off with Stone Cold. 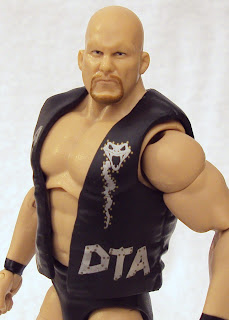 This Stone Cold Steve Austin is almost identical to his previous release in the WWE Legends line, the only difference being the addition of a second knee brace on his right leg, which represents Austin at a point later in his career. 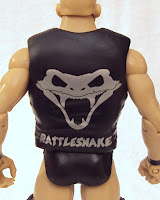 Austin's trademark entrance vest is included, this time around though it features his "DTA" (Don't Trust Anybody) motif with rattlesnake head logo on the back. It's made of the same sturdy stuff as the last vest and fits well, although a little too form-fitting. 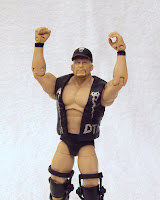 His other accessory is a black ballcap (I'm pretty sure it's the same one John Cena's Elite figures come with) with a Stone Cold skull printed on the front.

It would have been great to get a DTA t-shirt instead, but that probably didn't "cost out" for Mattel. The hat fits his head fine, but it looks a little goofy considering Austin's in his wrestling attire. 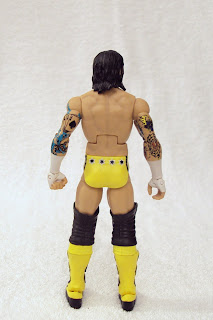 CM Punk's sculpt is identical to his firt two releases in the Elite line (Series 1 and Series 6), except he doesn't have the white elbow pad that has become standard on his figures. On this release he keeps the familiar trunks & boots design with a yellow background. The paint is excellent on the figure and makes for a nice addition to the CM Punk wardrobe collection. While Stone Cold received a couple of accessories, Punk only has his hair clippers. The clippers are exactly the same as the Elite 6 accessory, which you could consider as a Punk trademark, albeit a bit dated. Considering he's squaring off against Stone Cold Steve Austin (who is BALD!) in this set, Mattel should have added a different accessory or have Punk matched up with a different Legend. Jake "The Snake" Roberts, perhaps? Coincidentally, I think Austin versus Orton would have made a better match-up as well.

If you've collected Legends and Elites from the beginning, you probably already have earlier versions of these two. There's not much new sculpt-wise, but if either is a favorite of yours, you'll happily add them as I have. With Punk you get great new redecos of his attire, but for Stone Cold that's not easily accomplished since his attire barely changed at all. I'm glad Mattel added the second knee brace and added a new deco to his vest, in that respect. I could live without out the cap, and in fact, I think instead of it and the hair clippers, they should have given Punk a t-shirt or weapon. The price isn't bad considering single Elite figures now sell for $16.99 at Toys R Us (and not much cheaper everywhere else). In all, it's a good set and great value if you don't have either of these guys, yet.