He's awwwwesommmme! Or so he would have you believe...

The self-proclaimed "Awesome One" makes his second appearance in Mattel's WWE Elite Collection action figure line. This time around he dumped the long shorts and gloves in favor of a more traditional in-ring attire AND he's packing some gold! Here's a look at the United States Champion version of The Miz.

For those who don't follow the WWE, but think they recognize The Miz from somewhere: yes, he is that guy from MTV's The Real World and it's various "Challenge" TV shows. The Miz is a highly entertaining WWE Superstar and he's one of my favorites from the current era, although his in-ring performance often isn't as smooth as it could be. Nonetheless, I was happy to find him at my local Toys R Us a few weeks ago.

The Miz's figure is appropriately built on the CM Punk body, even sharing the same lower legs, which feature the kick pad-style boots. Thankfully, Miz's choice of knee pads are much more compact and the figure receives the medium size pads. The headsculpt is nicely done, capturing Miz's stern look and ridiculous preppy mohawk very well. They could have gone with his jerky smirk and that would have been alright, too. I believe we'll see that expression on his upcoming Elite 11 figure. 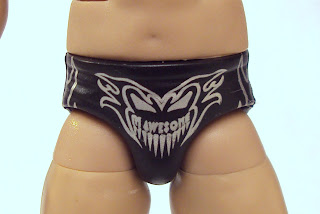 The Miz is given the requisite black Elite attire, but it features silver logos. All the designs are crisply applied and I couldn't find any instances of missing or fading applications.

The Miz's trunks are adorned with his grinning demon face, "I'm awesome" logo, while a creepy close-up shot of his eyes with the words "BE MIZ" decorate his rear. The "I'M AWESOME" face also appears on the back of each of the Miz's boots. "BE MIZ" is also appears down the inside of each boot. His trunks and boots feature a flame outline surrounding all of the logos, too.

When it comes to accessories The Miz includes his entrance coat and United States Championship belt he held for a while prior to becoming WWE Champion. The coat is molded in the same stiff rubber we've seen on entrance accessories for Elite versions of Undertaker, Finlay and Edge. The length of the coat doesn't hinder the figure's leg movement much, but the full-length sleeves keep the figure from being able to raise it's arms. As has been the standard for the line, Mattel sculpted plenty of detail on the coat, keeping it authentic, but like the coats included with the aforementioned figures, there is only minimal paint on the accessory. The only painted details on the coat are the silver buttons running down the front. 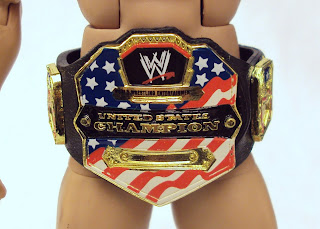 The Miz's second accessory is the US title belt and it is one of the nicest championship belts in the line to-date. Like the other belts in the line, the US title features a rubber strap with vac-metallized plastic plate fastened on to it. Each of the plates feature great sculpting and the three center medallions are enhanced with phenomenal painted details.

You can clearly make out individual stars across the belt and there is no bleeding between the red and white stripes. It fastens in a quasi-authentic fashion with a group of four pegs on one end and a series of holes on the other end, allowing for some adjustments between different figures. Maybe it's because of the US title's irregular shape, but it seems to be in better scale than the previously seen classic Intercontinental Championship belt. The only inaccuracy I can spot is the blank name plate area, of course, if Mattel had stamped The Miz's name on the belt, it would limit the displayability of the belt, so I'm certainly not complaining. 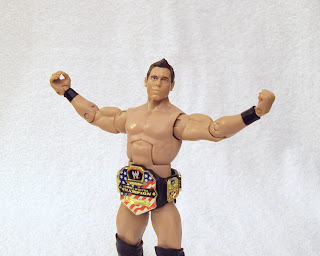 Elite Series 9 delivers an excellent version of The Miz and introduces a beautiful championship belt accessory to the line. The black and silver attire is a bit bland due to it's repititive use in the Elite line, but it's undeniably sleek and elegant, so I can't complain too much. I'd prefer the black attire with red designs, but I'll take this version over the coming-way-too-soon blue and silver version in Elite 11. Is this figure awesome? Not quite, but it's close.