Woo woo woo! The WWE (self-proclaimed) Internet Champion makes his debut in Mattel's WWE Elite Collection action figure line and he's bringing his unique brand of entertainment to your toy shelf. Alas, all is not well in Ryderland... does this figure live up to the hype or does it crash and burn? Find out... NOW! 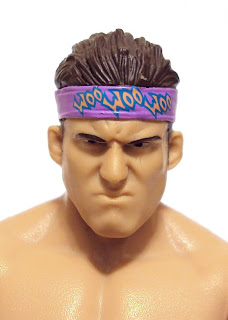 The Long Island Iced Z receives a great, sneering facial expression on his head sculpt. His headband is sculpted on his head and although you can't remove it, it has nice paint work with Ryder's trademark catchphrase printed clearly across the front. 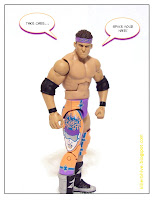 There are those who would call Zach Ryder's ring attire "outlandish" or "ridiculous" and I'd have to say those are accurate descriptions. Still, that's the point! He's a fun character to watch and highly entertaining. This attire, while already outdated (Ryder currently sports short trunks without a pant leg in sight), definitely represents that very well. You'll immediately notice his tights only have one pant leg. The other leg is bare except for his large knee pad and boot. The single pant leg features Zack's spiky-haired head logo stamped on his thigh. The tampo is nice and clean, and Mattel even made the effort to continue the design over the peg holding his knee in place. However, the peg has a significant paint chip revealing the flesh color the peg is molded in. Also, it's turned slightly to the left, so it doesn't line up with the rest of the image. I'm afraid that isn't the only mishap on my figure. 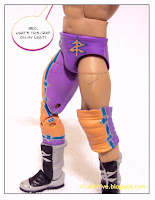 The other side of the peg (on the inner thigh) isn't painted at all! And the bare flesh tone is really noticeable when you look at his right leg from the left. With all the various colors and odd shapes in Ryder's tights design, I'm sure it poses quite the challenge for the factory making these figures for Mattel. Unfortunately, my copy also suffers from some sloppy assembly and carelessness. There are several paint rubs and scuff marks around the figure. Most noticeably on his left thigh, as Zack's pointed out in the comic to the right. Also, since his knee pad is molded in purple the orange sections have to be painted on. The paint is thick enough to cover-up the purple underneath, but it's already begun chipping at the edge of the pad.

Ryder's boots are reused from the previous wave's Drew McIntyre. They're molded in gray and have black and silver paint applications. The boots are almost completely smooth, but have three sculpted straps on the back side. The foot portion also features a sculpted out section on the top.

Seems simple enough, but the "quality control" fairy must have called out sick the day my figure was created, allowing a bunch of scuffs and paint chips to make it past the factory doors. Most of the issues are reserved to the front of the boots, but the back sides weren't spared completely. Very aggravating. That aside, each boot also features Ryder's stylized Z logo on the front and they've been applied neatly. Probably a negative-space application from the black, painted section of his boots. 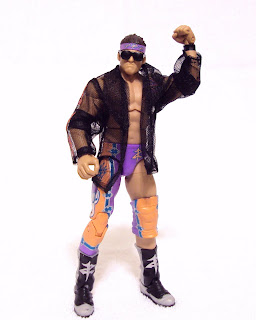 Thankfully, I didn't encounter any QC issues with Zack's accessories, which are his sunglasses and jacket(?). The sunglasses are specifically made for Ryder's headsculpt and are held in place by friction, sitting on his nose and over his ears. They're molded in black and don't feature any paint apps, but don't really need to either. 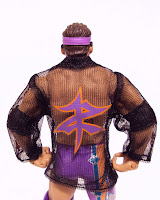 The Broski's second accessory is his entrance, um... garment? I don't know if this qualifies as a jacket or shirt or what because it's see-through. However silly it may seem, it's quite impressive for an action figure-sized clothing accessory. It's netted, perfectly simulating Ryder's real-life entrance coat and features a bunch of ZR's logos and sayings. The right and left sleeves display Ryder's "WOO WOO WOO" and "YOU KNOW IT" catchphrases, respectively. He's Z logo appears twice on the jacket: on the front, over the left breast and much larger across the back. All the logos on the jacket are printed in two-tone and look very sharp. I'm really impressed with this accessory. It's marvelously constructed and shows off the best of what Mattel has to offer in this line. But it further aggravates my disappointment with the figure's paint issues.

Compared to the repititiveness and simplicity of figures like John Cena, the Undertaker and Triple H, Zack Ryder offers a great oppurtunity for Mattel to shine, particularly with this attire. It's a shame my figure was plagued by sloppy QC issues because I truly enjoy the figure and he is so unique looking among the Elite line-up. I normally inspect figures when I'm at the store to avoid a lot of these problems, but this was the only Zack Ryder on the pegs at Kmart that day and since I initially skipped him when I first saw him at Toys R Us, I didn't want to take any chances. I still have his package and the receipt, so I'll keep looking for a replacement because he's a fun figure of a fun character that revives the silly fun of professional wrestling that is kind of lacking in the current product. I hope these issues are isolated to just my figure and you are able to find one that is in truly pristine condition. I don't know if we'll see another Zack Ryder figure in the Elite line anytime soon, but it would be awesome to have one that includes his custom Internet Championship belt. It probably won't look exactly like the actual belt, I can only imagine the trademark issues involved in recreating it. Until then, maybe he can start carrying around the one pictured below... 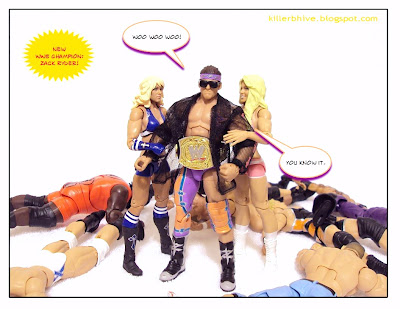 I went in to my local TRU today (9/01/11) and they had restocked Series 9 with only one Zack Ryder. I immediately grabbed him and killed two birds with one stone. First, I was able to replace the first figure with a much better copy. There were still some stray paint marks on his boots, but overall it looks nicer. The right thigh peg is still unpainted on the inside, but is lined up much better with the logo on the outside. Since I kept the original's package and receipt, he'll be going back to Kmart tomorrow.

Secondly, I needed to buy one more WWE figure at TRU to qualify for another (I already ordered one at the end of July) exclusive Mr. McMahon figure. Finding ZR at TRU helped me accomplish that goal.

I wonder what I'll do with the spare Vince...