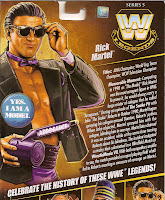 Nothing makes for a better heel than an arrogant, highly skilled, pretty boy. Rick Martel was never at a loss for words when it came to talking about himself and utilizing the spine cruncing Boston Crab, he was a highly-despised grappler in the former WWF. Here's his first entry in Mattel's WWE Legends and I think we won't need another anytime soon. Let's take a quick look at "The Model." 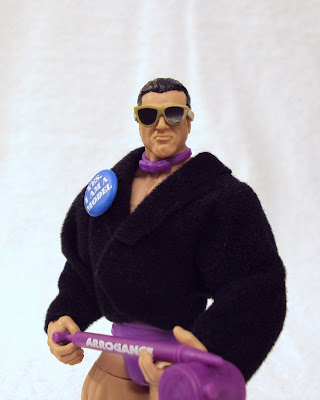 The Model has no shortage of accessories, packing his entrance jacket, bow tie, sunglasses and atomizer with his preferred fragrance: Arrogance. The jacket is made out of a thick cloth that, while not featuring a button to close it on the front, is able to hold it's shape and remains closed when fitted on to the figure. The sunglasses may look familiar, but they are new to the line and made to fit Martel's face specifically. They're molded in gold plastic and seem to have black decals for the lenses.

The bow tie is separate piece and molded in the same purple plastic as The Model's lower torso, knee pads and boots. It held on by a simple peg and hole system on the back and seems to be very durable. I'd still exercise caution when removing it, so as to avoid tearing the peg off. 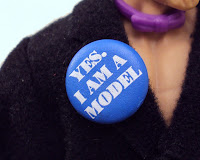 Martel also features a large, novelty button with the inscription "YES. I AM A MODEL" and I'm amazed at it's detail given the scale. It's a small plastic button with velcro on the back that allows you to place it anywhere on Martel's jacket. The letters are printed quite clearly and cleanly on the button's face.

The same can't be said for the lettering on the atomizer. "ARROGANCE" is printed on each side of the atomizer's shaft, but it's a bit faded and some of the letters are scratched on one side. The Model's hands don't offer a tight grip on the perfume sprayer and that's probably for the best because it would probably scratch the letters off completely. The atomizer features two pieces: the main sprayer with perfume reservoir attached at the end and the plunger. You can slide the plunger in or completely remove it from the shaft. In fact, it's very loose and will fall out easily. To remedy this I wrapped a small piece of tape around the tip of the plunger, the added girth keeps it from falling out now. 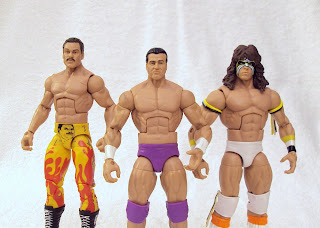 The Model was a physical specimen and the toy does well in portraying that. It features an identical body sculpt to the Randy Savage figure, except Martel is sporting shorter boots. This body is extremely toned like Rick Rude's but bigger, while remaining less bulky than the Ultimate Warrior's. It's a perfect fit for Rick Martel.

Mattel did a great job on The Model's likeness. He has a great smarmy smirk on his face and you'd just love to hit him with a steel chair. The hair and head are one molded piece, with the hair ending in a short, tied, ponytail on the back. 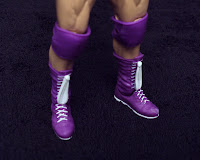 The paint on his head is well done and there's no slop associated with the purple hair tie. The only other painted areas on the figure are his wrist tape and the details on the boots, all of which are white. The did a nice job on the boots with the teardrop-shaped flaps sculpted over the laces. 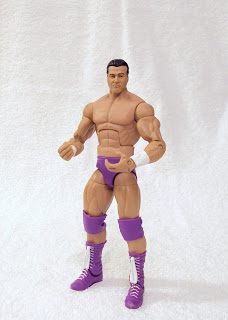 Mattel managed to deliver a great Rick Martel figure and minor quality control issues with the atomizer aside, he's definitely worth picking up. The Model is part of the second to last retail wave of WWE Legends and I'll have to admit I'm not overly optimistic about the future of the line on Matty Collector as I'm only excited about half of the fan selected figures. We'll just have to wait and see how it turns out.