Today I'm finally taking a look at a highly anticipated third party release that is the gateway to an unprecedented combiner robot fans of classic Transformers will surely appreciate. I've had him for a little over a month and he's a fun figure that promises TFC Toys' Hercules will be an awesome addition to the collection. Let's review: Exgraver!

A quick note about packaging: I didn't photograph it. If you're interested in that sort of thing you can see pics here and here. It's a window box that shows off a bit of the figure, which is held on a plastic tray. The box features original artwork that accurately portrays the figure inside and there are actual pictures of the toy on the back of the box. Inside the box there are the instructions on how to convert Exgraver and a trading card with his image and power levels. It's all done nicely and doesn't look cheap or "knock off-y" at all.

Exgraver and the combined Hercules are homages to the first Transformers combiner team the Constructicons and Devastator. Exgraver specifically homages Scavenger. As such he converts from robot to power shovel and comprises Hercules' right arm.

You may be asking, "What's the big deal? Hasbro's released a bunch of Constructicon/Devastators already." While that is true, those previous attempts (most recently as part of the Universe/Classics series) have always fallen short in respect to capturing the enormity of Devastator. Hasbro's attempts have always utilized Deluxe class or smaller individual robots, hence making them look nonthreatening on their own and while combined. That's where TFC is working to make a huge improvement. Exgraver is on par with larger Deluxe and smaller Voyager class figures.

The robot mode looks truly menacing thanks to his large shoulders. There is a lot of sculpted details on the figure making him look like a true piece of machinery. He features plenty of articulation and you can get him into some really great poses. His hip joint is a bit loose, but not to the point where you can't get him to stand under his own weight. 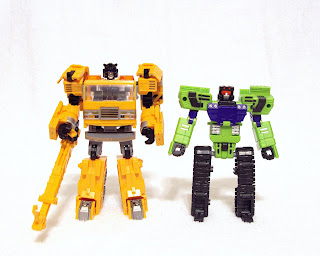 I probably should have used a more common figure for size comparisons, but I thought it was appropriate to include Grapple in this review. He's a Voyager class figure, but you can see that Exgraver isn't tiny next to him. Exgraver is just a smidgen shorter than Classics Optimus Prime, but just as wide. Thanks to TFC's design, Exgraver remains a formidable opponent even on his own. 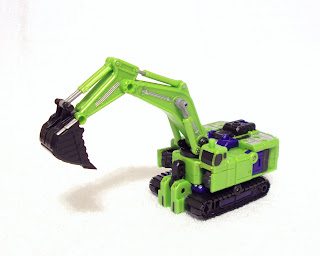 Exgraver's (just like Scavenger's) alternate mode is that of a power shovel commonly seen on construction sites. His sculpted details really enhance this mode as the diamond-plating seen on his shoulders now appear on the deck of the vehicle. The treads do not move, instead they feature four wheels that allow the vehicle to roll easily. The coolest part of this mode is the digger. 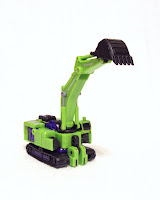 It features hinges at the base, halfway up the arm and at the shovel. Also there are working pistons that extend and retract as you manipulate the arm. The base also swivels where it connects to the vehicle and can be removed allowing Exgraver to use it as a weapon in robot mode. I've read reports of the digger arm breaking, however, I haven't encountered any issues with it so far. And TFC is actually offering replacements for customers who have had a broken digger arm. Not just that, a replacement arm is being included with the second figure in the series, Heavy Labor (aka Long Haul). 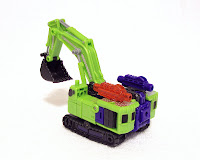 The picture to the left shows Exgraver carrying all of his accessories: two blasters and Hercules' right hand. The blasters are identical except one is molded in transparent red plastic while the other is molded in purple plastic. The fit into peg holes on top of the vehicle or in each of Exgraver's hands. The weapons will also combine with the weapons of the other team members to form a giant weapon for the combined robot. Since Exgraver forms Hercules' right arm, he includes the right hand attachment that forms the purple center panels at the rear of his vehicle mode. More on that later. 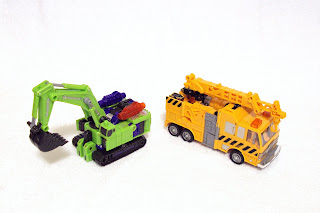 In alternate mode, Exgraver is in pretty good scale with Grapple. You might argue that he should be bigger, but the funny thing is that in 1980s, these construction vehicles were huge machines, but taking a look at newer models, they seem to have shrunk. Exgraver is a pretty good representation of current models in that regard and doesn't look as out of place next to Transformers vehicles as the G1 toy did. 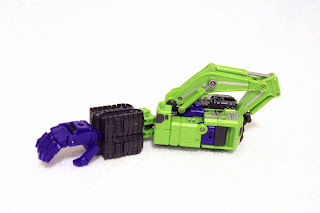 Converting Exgraver is a simple process. The trickiest thing is figuring out what to do with the giant right hand jutting out of his back when he's in robot mode. I prefer to just remove it. His shoulder flip up around his head with the arms forming the sides of the vehicle. His waist folds down allowing you to align his legs underneath him, forming the treads. From vehicle mode the conversion to arm mode is simple. The top half stays the same, although you have the option of rotating the digger arm and tucking the shovel into the rear of the vehicle. The legs extend then fold in half, joining together to hold the right hand and creating the forearm, giving you a big robot arm. To put things in perspective... 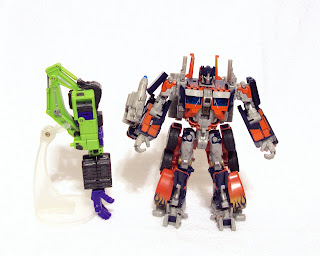 ... that's Hercules' right arm propped up next to Leader Class Optimus Prime from the 2007 movie line. That's a big f*&$ing arm. That Prime figure is about 10" tall at the top of his head, so I'm guessing the completed Hercules figure will be about 13-15" tall.

The hand is highly articulated with each finger having independent hinges at the knuckle and mid-finger. Meaning you can pose the hand with a piece sign or flipping off Autobots. The thumb is on a ball joint allowing it to rest against the palm or on the side of the hand and also features a mid-thumb hinge. Connected to the forearm, the hand can swivel around at the base and move in hinged fashion. This will be great for grabbing other bots.

Now for the nitty-gritty: the price. This figure is expensive. No matter where you find him, he's not going for any cheaper than $93.00 after shipping. I ordered mine from Robot Kingdom and that's how much I paid to have him. Obviously his "worth" is relative to the buyer. I've only recently renewed my interest in Transformers and that's mainly the Classics figures, so I'm playing catch-up and I've had to pay double or triple above retail for several figures, so I look at this toy through those lenses. I have no interest in a classic Devastator (I once owned a knock-off and shoddy quality aside, didn't care for his small size) or even the updated Classics version. Therefore I was truly excited to learn about TFC's version of the iconic gestalt. There's no way Hasbro would ever deliver a Devastator of this scale, it's just simple numbers really, it would be too expensive at retail. Even with the expense of this third party product, it's not enough of a profit for Hasbro, that's probably why they turn a blind eye to these things.

I can only speak for myself when I say this is a really cool figure and worth the cost. I'm happy with the quality and craftsmanship of the figure and eagerly await the rest of the team. Next up is Heavy Labor (aka Long Haul) and I've already pre-ordered him, so he should be arriving this month in October. Be on the lookout for a review!
Posted by 3B at 11:50 AM