FansProject's Protector Armor was my first foray into the world of third party Transformers products and it really amazed me how cool an "unofficial" toy can be. While Hasbro has successfully revamped many classic G1 characters over the past five years, spread out in the "Classics" lines (Universe, Reveal the Shield and most recently Generations), they still haven't delivered the champion of the animated TF movie and subsequent season of the G1 cartoon: Rodimus Prime. Sure, they've released Hot Rod, or "Rodimus" if you're feeling randy, in a few of those previously mentioned lines, but they haven't produced a Primed version of the character. Their Classics Ultra Magnus had the same problem until FansProject stepped in and delivered a highly sought-after upgrade kit, making the simple, remolded Optimus Prime figure into the towering City Commander we all know and love. It was only a matter of time before they did the same for Rodimus Prime.

Before we jump into the review, let me tell you a story about, at the time, a soon-to-be 7-year-old, 3B. His father asked him, "what would you like for your birthday?" and lil' 3B replied, "I want a Rodimus Prime figure, Dad!" Armed with that information, 3B's Pop set out to the toy store to hunt down his son's birthday wish. At young 3B's birthday party, his father handed him a big wrapped up box and said, "Happy birthday, son!" The small boy's eyes widened, his chubby little hands worked frantically to tear off all the wrapping paper and once he was done littering the floor with flotsam, his jaw nearly hit the floor, for underneath all that celebratory pulp was...

Not only did young 3B receive the wrong Prime figure, it was one he already had. But, it wasn't his father's fault and the boy would soon learn why. You see, it was circa 1989 and Rodimus Prime toys, at least the "space Winnebago" version, wasn't in retail stores any longer. I was familiar with the character because the cartoons were still on TV and I watched all the time. Optimus Prime was always my favorite TF character, but like many small kids at the time, I really liked Rodimus because OP wasn't around while Rodimus was the leader (most of the time). I never obtained a G1 Rodimus Prime figure, but it seems to have worked out for the best because now I have a super-articulated, super-detailed R-Prime figure and like many of the revamped figures, it blows the classic toy out of the water! 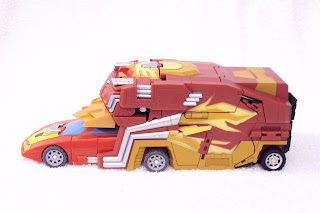 FansProject's Protector is essentially an add-on kit for your Classics Rodimus. I have the "Battle In Space" version of Rodimus from the Reveal the Shield two-pack. The colors don't quite match up as the Protector is molded in a darker shade of red, but I ain't forking over $60+ for the Classics or Henkei! version. Thankfully, Repro Labels came up with a decal kit that helps integrate BiS Rodimus to the Protector. Aside from the BiS figures grey wheels, the kit helps a lot. I didn't care for the maroon flames you can add to Rodimus, so I didn't apply those. You will see pictures of the Protector with and without decals throughout the review. 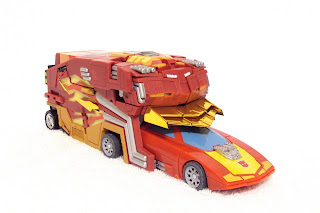 Out of the box the Protector is in vehicle mode. The side panels towards the front end open up, allowing you to insert Rodimus, then close the panels around him. He fits snug and once the panels are closed you can pull the entire vehicle by the front or push from the back. 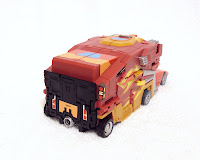 In order for Rodimus to merge with the Protector in vehicle mode the only conversion you need to perform is to extend his rear wheels all the way out. Rodimus' blaster, which doubles as his exhaust pipe can be moved to the back of the Protector and serves the same function there. 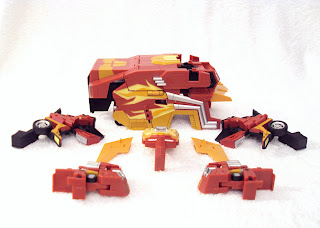 Sections of the the Protector breakdown into armor upgrades for Rodimus, converting him into his Prime version. The left over pieces, which is about 80% of the overall vehicle, have two modes. First, there is a tank mode that accommodates FansProject's version of Rodimus' classic Targetmaster companion Firebolt, dubbed "Sidearm". He's a separate item you can purchase to compliment the Protector. 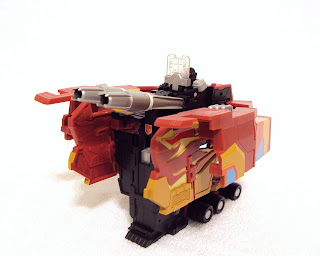 The rear and top panels on the Protector open and rotate forming the exterior of the tank mode. The opened panels also reveal the double-barreled cannon and storage area for Rodimus Prime's rifle extension, fitting into a hole just below the cannons. The barrels are on hinges and can be adjusted 90 degrees up and down, moving independently of each other. Sidearm can sit behind the cannon and there is even a flip-up targeting screen with crosshairs sculpted into it. 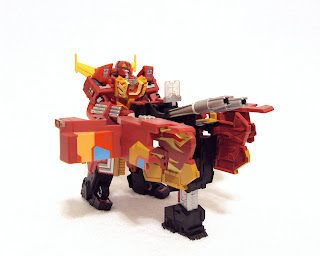 The second mode allows Rodimus Prime (or another Autobot) to use the trailer as a battle-station without the need for Sidearm. The platform Sidearm stands on flips up, inside the cockpit, there are handles on each side you can flip out and fit into a figure's hands. The stand the platform uses extends to make the station taller and what you thought were just the tank wheels actually detaches into a Roller-like drone for Rodimus named Scout. 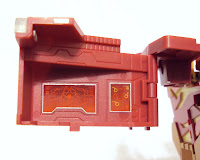 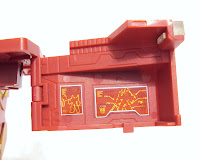 FansProject sculpted plenty of detail on the inside of the Protector including monitor panels, which unfortunately aren't adorned with anything. But that's were Repro Labels steps in and gives us plenty to look at, including power readouts for the Matrix of Leadership and out combat-related details. 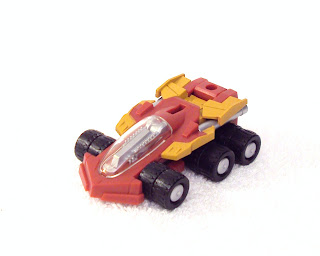 The scout drone is nicely detailed and ties-in perfectly with the rest of the Protector. He has a clear cockpit showing off his engine and features no less than 6 pairs of wheels.

He also receives a makeover thanks to Repro Labels, adding headlights and some flames. There's a hinged piece under Scout that allows you to attach the flame projectile included with Hot Rod, making Scout look like he's blasting over the road. He also features peg holes to accommodate Rodimus's weapons.

So far, we have a futuristic-looking family recreational vehicle that turns into an all-out war machine. But how does all this kibble turn Hot Rod into Rodimus Prime? 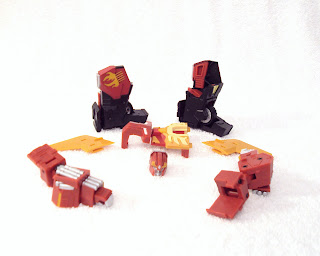 The removable pieces that are not used in the tank and battle station modes each convert into Rodimus Prime's arms and leg extensions. The front center piece of the Winnebago forms his chest and crotch armor with a hidden helmet that features a new faceplate. Each of the pieces snap on to Hot Rod's arms, legs and torso, requiring some slight modifications of his appendages. The trickiest part is the chest armor and how it fits over the crotch. You have to slide the entire crotch part forward, allowing the armor piece to snap on and line up with the chest area.

There is plenty of detail and a very technological look to the sculpting, making the upgraded Rodimus look like he stepped out of one the newer IDW comics.

Most impressive is the detail FansProject added that you only see when the Protector is in it's armor mode. Repro Labels added some nice touches here, filling in some blank spaces on the arms and eliminating the yellow sections below the knees. The picture to the right shows the Protector armor without the sticker upgrades. 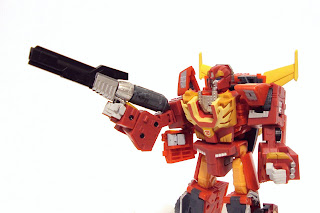 The rifle extension included with the Protector attaches to Hot Rod's blaster as if it were a projectile. The extension has a flip out handle to fit into the upgraded Rodimus' hands. It looks a bit weird with my figure because the BiS Rodimus' blaster is grey, but I guess it's passable. Might have to do a bit of painting there.

You may have noticed the vehicle mode's windvane appears in different colors in various pictures. The Protector includes an orange version which is actually three pieces: the top blade and the bottom two blades that can also be used on Sidearm or in armor mode to give Rodimus Prime "wings". 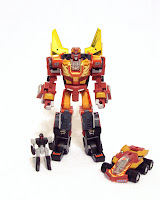 The gold chrome version is included with Sidearm, but works the same way. I actually like it a lot better on Rodimus' vehicle mode, however, I don't care for the wing extensions on his robot mode. The yellow spoiler from his basic robot mode looks fine to me without the extensions. 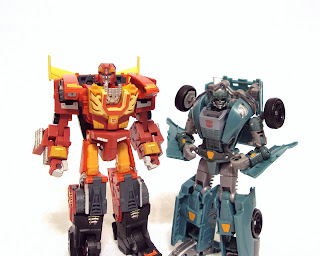 At over eighty bucks before shipping, this is definitely an expensive item. The good news is that the quality present is top-notch and converts your plain old Hot Rod figure into Optimus Prime's successor. And it does it with plenty of style and some really great extras. I don't know if Hasbro ever plans to release a Voyager class Rodimus Prime, but considering that their Voyager Optimus & Ultra Magnus arrived without trailers, I seriously doubt they'd invest too much tooling into an all-new RP. Considering that, it makes this add-on a must-have for Rod-Prime fans. The minimal paint apps may be a turnoff for some fans, but if you're familiar with Repro Labels, then you have plenty of options to upgrade your Protector whether it be the "Battle in Space" or Classics/Henkei! versions. 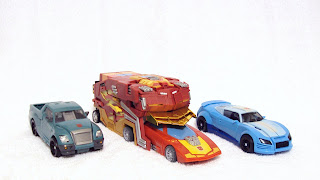 I'm happy with mine and I'm happy that groups like FansProject, Repro Labels and others are out there enchancing our transforming robots collections. Protector makes Rodimus look great and he looks great with trusty, ol' Kup standing next to him. Now all I need is Ultra Magnus!

And Arcee... and Springer... you HAVE to have Springer. And then I'll need to track down a Classics Galvatron...
Posted by 3B at 10:35 PM