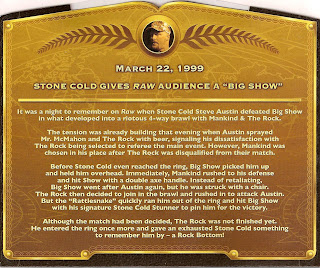 Even though he's considered the most popular WWE Superstar of all-time, Stone Cold Steve Austin isn't known for having outlandish entrance or ring attire. However, that hasn't stopped Mattel from releasing different versions (albeit with minor differences) of the Texas Rattlesnake. Let's take a look at one of his most recent releases, from Mattel's deluxe WWE Defining Moments action figure line.

Stone Cold's first foray into the "Defining Moments" line comes from the infamous "beer bath" episode of RAW, briefly recounted in the packaging text. I remember watching that episode and it was a great moment in WWE history. You could always count on SCSA to do the unexpected.

Mattel delivers Stone Cold decked out in his hunting attire from that wild night and other appearances. The jacket is surprisingly thick for an action figure garment. It features a hood held down by a single stitch on the back. I assume removing it would allow the hood to fit over Austin's head, but I prefer to keep it intact, keeping the hood down against the figure's back.

DM Stone Cold also includes a new ball cap. It's the same mold as the cap included in the WWE All-Stars two-pack, however this one is molded in light brown with black paint apps to deliver it's camouflage motif. The front of the cap is stamped with "STONE COLD STEVE AUSTIN" and a 3:16 skull in the center.

Once you've removed the jacket, you get a full look at Stone Cold's trademark(ed) "Austin 3:16" t-shirt. It's identical to the one included with his WWE Legends figure from the first series. For some reason I was expecting this t-shirt to be sleeveless, but I'm not sure why. I guess since I have two of them now I can just cut off the sleeves on one of them and create an alternate look for Stone Cold, but there is another way to accomplish that...

This Stone Cold features a new lower body with sculpted jeans. It borrows the lower torso (crotch area) and thighs from Elite John Cena. The hip joints are new, or at least different pieces from those on Cena. The lower legs look very similar to the Elite 6's Shad, but Stone Cold's aren't as wide. The feet come from the previous Austin figures. Just like the John Cena figure, Mattel retained the Elite/Legends leg articulation inspite of the sculpted jeans and they work fine. 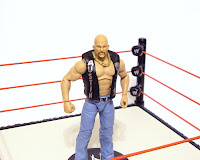 DM Austin also includes his gold necklace, which he wore quite often in his early Stone Cold Steve Austin promo videos & pictures along with his entrance vest. While I'm glad Mattel went for it, the necklace is too thick compared to what Austin wore (wears?). It's a borderline Junkyard Dog-type chain, but features plenty of detail, including the "Italian" links, which are one long, three short, repeat. It's also molded to fit the shape of his neck and shoulders, so it falls realistically above his chest.

As popular as the "beer bath" segment was and my eagerness to own this figure, in truth I couldn't wait to get it, strip of the hunting garb and slap on his 3:16 vest to create his iconic promo look. Still, the hunting stuff is cool enough to display and you feel like you get your money's worth for the figure overall. I ordered mine from the Mattel online shop where I took advantage of a free shipping offer. He was $22.99(+ tax), which is three dollars cheaper than what Toys R Us offers him for (online, I still haven't seen him in stores). Even though he already sold out, Ringside Collectibles saw fit to charge $29.99 for him, which is just crazy. I was holding out for him at TRU (the only retail store in my area that still sells DM figures), but when he came in-stock on Mattel's website, I ordered him right away. If you've never been a SCSA fan, the DM mark up will surely keep you away, but Stone Cold fans won't want to pass up on him. 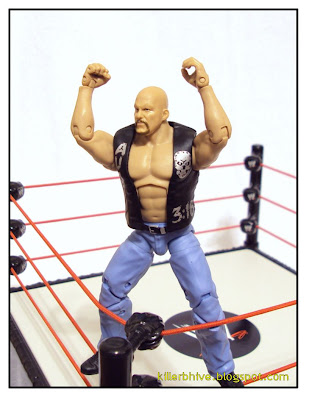 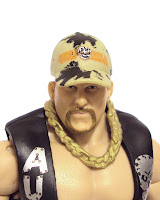