Proclaimed "The Chosen One" by Vince McMahon, Drew McIntyre represents the young blood in the WWE. I'm not impressed, but he seems to have a loyal following, albeit a modest one. It's rather appropriate that it was Vince McMahon's (the action figure, anyway) fault that I purchased McIntyre. Hunting after WWE Elite and Legends figures at Toys R Us in order to complete the foursome of UPC codes needed to send away for a free McMahon figure, I found DrewMac & William Regal. I figured McIntyre looked different enough to look good in my Elite display, plus I could review him for the benefit of you readers who are thinking of picking him up. Let's proceed!

Maybe it's the ponytail or his fine facial features, but Drew McIntyre comes off as a bit of a pretty boy to me. His ponytail is sculpted as part of his head and is tied back near the bottom of his hairline. There's only a slight hint of expression in his face, but it's enough to come off as cocky. I guess that's appropriate for Drew as he's surely high on himself thanks to McMahon's endorsement. 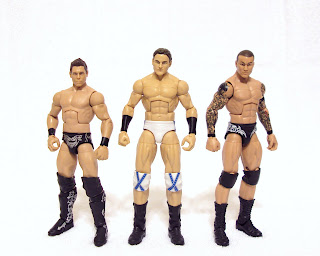 McIntyre's sculpt below the neck is interesting. He shares his upper body with Randy Orton, but his legs are huge! They're the same legs featured on Triple H and Batista's figures. The lower leg part is actually longer, making Drew a bit taller.

The Chosen One features very minimal paint. His wrist tape is painted in black and his shorts and knee pads each feature a blue and silver intersecting lines. Each of those pieces is molded in white plastic/rubber, respectively, and have the "X" design on each of the pads and both sides of his wrestling shorts. Each application looks good, but the one on the left side of his trunks had a bit of blue smearing over the silver lines. 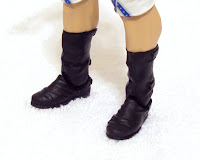 DrewMac debuts a new pair of boots to the line (and later seen with Zack Ryder's Elite 9 figure) featuring a smooth front and straps on the sides. The attach below the calf like a lot of the modern Superstars boots and don't add any height to the figures compared to other boots. 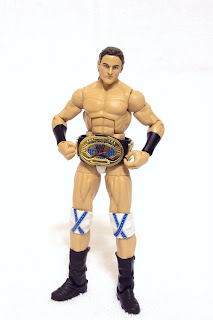 Drew McIntyre is another single-accessoried WWE collector figure. While wavemate William Regal received a full entrance robe, Mac only has a title belt. However, it's the highly-coveted WWE Intercontinental Championship belt, making it's first line appearance in modern form. When Mattel revealed the Drew McIntyre Elite figure I was more excited about the IC belt than the figure. 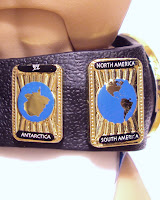 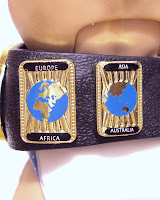 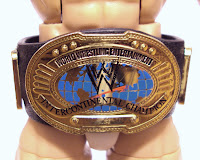 Looking over the list of former IC champions you sense a certain quality to that title that is nearly as, if not more, impressive than even the WWE Title. Putting the title's history aside, this accessory perfectly captures the look of the current design, one that's been in use for over a decade if I'm not mistaken. I'd rank this belt's beauty and construction along with the US Title accessory we saw with The Miz.

With the recent round of price increases, Mattel's WWE Elite figures are hovering just below $20 apiece after taxes. When you get a figure like Drew with only one accessory, it seems like you're paying a lot, and you definitely are. One accessory was passable when these figures were still $14.99, but $16.99 at Toys R Us is really testing the loyalty of fans. For that reason, I seriously doubt I'll be picking up the last wave 8 figure (sorry, Evan Bourne fans) unless I can find him on sale for less than $15. I think McIntyre should have included at least one more accessory, like the entrance coat he wore on a few occasions. All in all series 8 debuted four Superstars (Mac, Regal, Sheamus and Bourne) and significantly updated two previously seen Superstars (Undertaker and Edge). We also received the first modern versions of the WWE Title (this one's already scheduled to come with two other figures later this year, both of them Miz) and the Intercontinental Title.

This week I've reviewed in Englishman, an Irishman and today a Scotsman. Maybe I'll keep the European theme going for a couple more reviews...
Posted by 3B at 12:25 AM