This week one of KBH's Facebook followers requested I post a review of an Elite John Cena figure. Now, this may come as a shock, but I am not part of the "CENATION". I wouldn't say I hate him, but I don't like him. Inspite of being the WWE's "top" superstar, Cena's first WWE Elite figure didn't appear until the third wave of the series, but it laid the basis for his later figures. So that in mind (plus the fact it's the only Elite Cena I own) that's the figure we'll be reviewing today. Let's take a look!

A quick note about the Hive. We (or rather, "I", for now...) aim to review as many Mattel WWE figures as possible, however, it's pretty obvious by now that I'm a much bigger fan of classic WWE, as I collect nearly all the WWE Legends stuff. That doesn't stop me from buying a lot of Elite figures, but there are only so many I can afford between Legends and other stuff I collect. My goal is to review EVERY figure I buy and try to have the checklist as complete and comprehensive as possible. When I started KBH in May of 2010, I already had several Elite figures from series 1-3. Many of those have never been reviewed because there always seems to be an onslaught of new stuff coming out. I'm going to try to sprinkle in reviews of those older figures among the newer ones as often as possible and hopefully be "up-to-date" by the end of the year. To accomplish that I'm going to strive to keep the older figure reviews short, but sometimes that's hard to do, so bare with me. Okay, on to Cena!

Our first Elite John Cena is based on his "Hustle, Loyalty, Respect" (or HLR) attire from 2009. At the time the figure was released Cena was sporting the very bright orange "Never Give Up" attire, which would later be seen in Series 7. There's no denying John Cena is a huge dude. Not the tallest, but the dude is bulky and ripped. As such, he shares the very muscular, large torso seen on Triple H and Batista figures. Same goes for the arms. He doesn't seem to be in much of a good mood as his facial expression conveys here. I'm not too crazy about this headsculpt. It looks like a younger version of Cena. He's had a couple other expressions on his Basic figures already, but I think the best is the smiling one. It fits his character much better.

There's minimal paint on Cena's upper body. Most of it is reserved for his wristbands and armband. I would point out that while I understand the practicality of painting wristtape and wraps on the figures, it doesn't quite work for John Cena. He wears two wristbands side-by-side on each arm, which are significantly thicker than tape and to reflect that Mattel should have sculpted them on his arms instead of just painting them on. The good news is that the paint work & tampos are clean and neatly detailed. 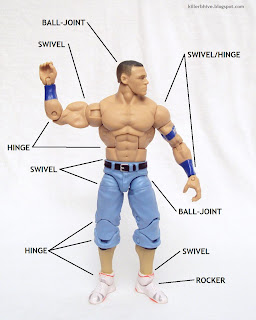 Cena's trademark jean shorts are sculpted on the figure and feature the same articulation points as figures sporting short trunks or tights. The movement is good and not hindered at all really. It may not be immediately noticeable, but Cena wears knee pads under his jean shorts and they've been represented in the sculpting. The crotch piece, upper legs and knees also appeared on The Miz's series 3 figure. The lower leg pieces on Cena are modified to eliminate the swivel cut at the calf that most of the Elite figures have for their boots. On Cena, the swivels are moved closer to the ankles, just above his sneakers as you can see in the preceding diagram.

His lower body features much more paintwork than the upper body because his legs are cast in the color of his jeans. The exposed areas of his lower legs are painted in a flesh color, but it doesn't quite match up to his upper body's skin tone. It's not too noticeable since you have his long jean shorts between those two areas. His ankle and foot pieces are molded in white and there's just a sliver of flesh exposed above the sneaker's sculpt that is painted to match his lower legs. The sneakers are detailed with red and silver paint. 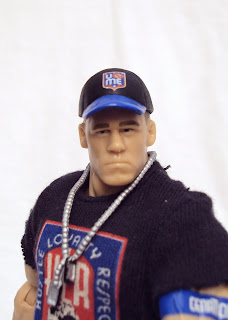 As part of Elite Series 3, Cena includes the now-defunct WWE display stand with cardboard name tag. It's not pictured, but if you have any of these from any of the 2010 Basic or Elite figures, it's the same, just with "John Cena" printed across the front. Cena's true accessories are: HLR cap, HLR t-shirt and dog tags. The cap is molded in black with the bill painted blue and Cena's "you can't see me" logo stamped on the front. It's segmented from the top and even features an opening on the back just like an adjustable baseball cap. 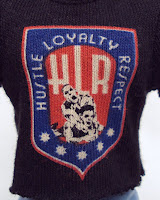 The t-shirt is made of cloth and like many other t-shirts in the line opens in the back allowing you to slip over the figure's arms and closes with a velcro strip. The HLR logo is screen printed on the front and retains most of it's detailing. All the lettering is clear, but some of the finer details on Cena and his opponents face didn't survive the transfer. Who is that he's STFU-ing, anyway? Batista?

His third accessory is the chain with dog tags he always wears to the ring. It's a rubbery piece that features nice details making it look like a chain made of little balls, albeit a bit over-sized almost to the point of looking like pearls. The piece is molded in gray, but painted silver with black used to create the rubber rings around the tags. In the package, Cena's not wearing his shirt (it's displayed in the tray next to the figure), but he is wearing the dog tags. This created a problem for my figure as apparently the silver paint on the tags hadn't dried before they were placed on the figure. When I took the tags off of the figure, there were silver paint marks around his neck and on his chest. I've removed most of now, but that's something a consumer shouldn't have to do. I don't know if this problem is persistent with other figures, but is possible since his other Elite figures have been packaged the same way. On the brightside, since he wasn't wearing the t-shirt, no silver paint landed on it, which would have been harder to clean up. 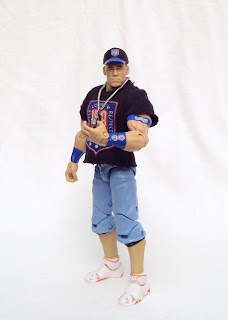 In all this figure is sure to please any John Cena fan and if you're thinking of adding his later figures to your collection, your basically getting this figure, but in different colors. I would have liked a little more effort on some details, like sculpting the wristbands and a paintwash on his very bland looking jean shorts. With Elite 11's CM Punk Mattel created a removable armband, so that would be a cool way to refresh Cena's future Elite figures. 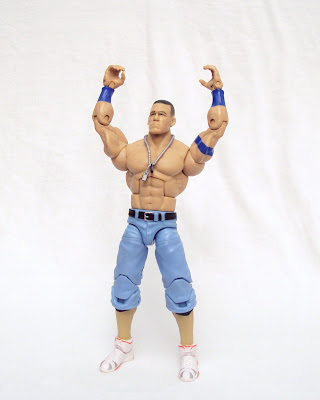