In his relatively short time in the WWE, Sheamus has proven himself capable of carrying main-event matches and holding his own in action-packed battles with the likes of Triple H and John Cena. Sheamus' first Elite figure immortalizes the Celtic Warrior during one of his WWE championship runs. Swarm to find out how it stacks up in line full of quintessential wrestling action figures! 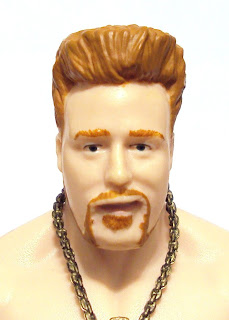 Sheamus' headsculpt is pretty spot on to his familiar "fella" smirk. Sometimes the sculpts on Mattel's WWE figure seem a bit soft because the lack of paint washes or other tricks to highlight details. This is especially true of Sheamus, but it's mostly due to his pale complexion, which is captured masterfully in the molded plastic. The Celtic Warrior's spiky hairdo (which would make Zack Ryder blush) is sculpted perfectly along with his beard. Unfortunately, the paint doesn't quite capture the fiery reddish color of Sheamus' hair. The color Mattel uses seems too bland for the ginger-haired wrestler. It's passable and considering the alternative of overly bright red hair, I'm thinking they wanted to play it safe and not make him look too cartoony. There are a few spots where the paint doesn't cover-up all of his sculpted beard. It's especially noticeable on his mustache. I wouldn't say it's a huge issue, though, mostly something you'd notice when examining the figure close up.

Sheamus is built on a large, very muscled and very toned body. At first I thought he shared the bulked up torso seen on Cena and Ultimate Warrior, but Sheamus actually shows off a brand new sculpt. It's not as bulky as the other wrestlers', but it's thicker than the super-toned torso on Macho Man and Rick Martel. Sheamus' upper torso is taller and his pecks are more angled than the others. Also his mid-torso (abs) feature a more prominent belly button that is at the exact intersection of the lower four abdominal muscles. It's refreshing to see how committed the design team is to expanding their tooling library for the line and delivering as accurate a figure as possible. Aside from the torso and shoulders, which are the same size as the ones seen on CM Punk & Randy Orton, the rest of Sheamus' body is recycled from Triple H.

Not surprisingly, Sheamus does not have a lot of paint on his body. Everything, except his lower torso and boots, is molded in his milky flesh color. The other parts including the knee pads are molded in black. Sheamus' forearm wraps are achieved with black paint and white cross tampos. The crosses are correctly stamped on the inside of each forearm. Take special note when buying Sheamus because the first one I saw at Walmart was missing the forearms crosses! Since they're printed on the inside of his forearms, I didn't notice until I compared him to the figure behind him on the peg and I'm glad I did. Always inspect your figures before buying! Unless you're ordering online. In that case, cross your fingers.

The Celtic Warriors trunks again feature the cross symbol on the rear and a presumbly Celtic word across the front. As far as I can tell, and I don't know for sure because I don't know the language, the letters spell out "LAOCH". However, the circle is formed by a serpent and the tampo is clear enough to see it. The letters are stylized in a manner that makes them look ancient. I think it's important to note that on the figure because that's how those details appear on Sheamus attire. The letters are surrounded by a dark green field. Sections on the sides of the trunks also feature the dark green coloring. It's really dark and you have to look close to make it out, otherwise it just looks black.

Sheamus' boots are essentially generic, below-the-calf wrestling boots, but the details on his boots are accomplished with a couple of tampos. Because there aren't enough on the rest of his attire, each boot has a cross printed diagonally across the back. A non-existant panel is outlined in white, running alongside the lace holes on each boot. The application is smooth inspite of the wrinkled texture of the boots. I encountered an issue on my figure that is undetectable from a sealed package.

I've experienced loose ankles on many of Mattel's WWE figure before, but Sheamus was probably the single, worst case. He could be barely stand for more than a few seconds. I've kind of come to expect some looseness there simply because of the length of the peg that plugs into the foot, but I was shocked by Sheamus' ankles. I used clear rubberbands (like the ones holding the figures in the packaging trays) to fill the gap between the lower leg and foot. Unlike previous figures with loose ankles, I had to correct both of his feet. Thankfully, that solved the problem and he stands fine on his own now. 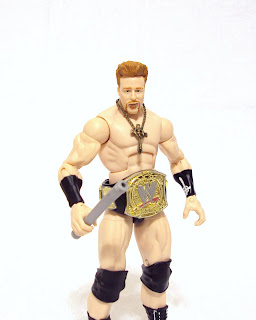 Sheamus achieves the rare wrestling action figure accessory trifecta, receiving one of each type of accessory: entrance, weapon and title belt. He includes his cross necklace worn on his way to the ring. The pipe he famously used to assault Triple H with on several occasions. And for good measure he's carrying around the most prized gold in the world of professional wrestling: the WWE Championship belt. 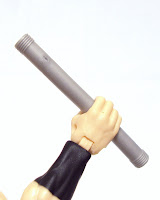 The cross and necklace are single molded piece. It features a nice paint wash to give it an aged metal look.

His weapon of choice is molded in grey plastic and features threaded ends like a connecting pipe. Sheamus can grip it perfectly in his right hand, but his left hand is opened too wide for the pipe. I don't know what else I can say about it. It's a pipe. Moving on. 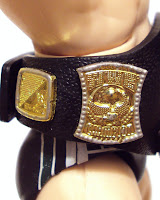 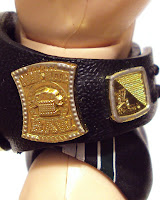 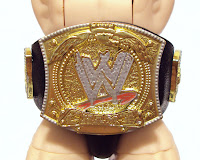 And finally, Sheamus was the first Elite figure to include the WWE Championship title belt. It follows the same design as the previous belts: rubber strap with individual, vacuum-metallized plastic plates afixed to the belt. Personally, I don't care for this version of the WWE title. It's John Cena's custom "spinner" belt and it's a bit to funky for my tastes. Some WWE purists may swear by the classic "winged eagle" belt (coming soon with WWE Legends series 6's Ultimate Warrior, albeit with a yellow strap), but I'm much more partial to the Attitude-era belt.

The action figure-sized belts feature closures with four pegs on one side and two rows of holes allowing you to adjust the belt to different figures. I photographed the belt on the tightest fit, but Sheamus can where it just as well on the second and third set of holes. You should click on the images to fully appreciate the details on the belt.

Well, I think I've written everthing I wanted to about E8 Sheamus. Catch you next time! 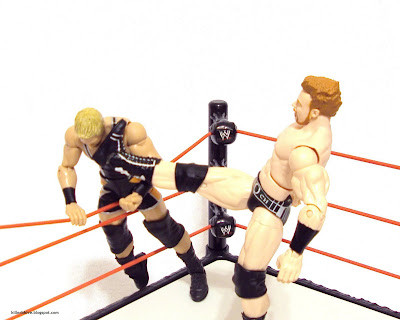 Not following KBH on Twitter, yet? You better start soon, fella, because there's a contest coming and you don't want to end up being the only PUNK who didn't play!
Posted by 3B at 11:05 PM