Whether you know him as Steven or William, Regal's been an integral part of the WWE for many years now. He's a wrestling purist and as such commands a certain respect among his peers. Although not known as a main-eventer, he's done plenty to deliver solid wrestling matches throughout his career in every promotion he's been a part of. Today we're looking at his first WWE Elite figure from Mattel. 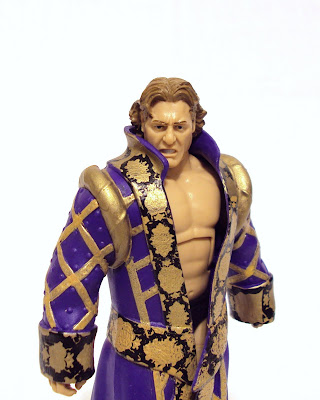 William Regal's only accessory is his formal entrance robe. It's styled in such a way to suggest he's of royal descent. True to form for the Elite series, the robe is molded in an articulation-inhibiting stiff rubber. However, it's sculpted with plenty of detail and unlike the coats for Undertaker, Edge and The Miz, it features lots of painted details, too. The paint can be spotty in certain areas, mainly the gold paint on the strips around the sleeves. And aside from a couple of missed apps or paint running over on to a different section, Mattel did a decent job with the decos.

One area of concern I had with the coat was it's length. You can't even see Regal's hands in the promotional pictures on Mattel's WWE Facebook page. I'm happy to saw that that is not the case with the figure in hand. The overall length of the coat is a bit long compared to images of the flesh and blood Regal wearing his coat. That seems to be a common issue with the other coated Elite figures, except for Miz, of course. The sleeves, however, are short enough for Regal's hands to poke out just above the knuckles as they should. I don't know if Mattel used a prototype coat in their promo pics, or if the figure they photographed was missing his hands. Either way, that problem was corrected and the coat overall is a nice display accessory for Regal.

William Regal is portrayed in tiptop shape here. I'm struggling to match his torso to a previous Elite (or even Legends) figure and beginning to suspect it may be a new sculpt. At first glance it looks similar to the slim torso seen on figures like Ted DiBiase, CM Punk and Shawn Michaels, but it's actually thicker and the ab section is wider. It's also just a smidgen less toned. It's not as big as the torso seen on Stone Cold Steve Austin and I think it's just right for a William Regal action figure. He does have a rather unique body shape compared to the rest of the roster. 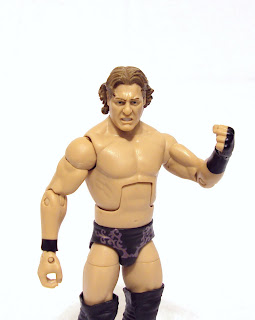 The paint on Regal is minimal, but with some nice details. As usual, most of his parts are molded in the required color. On his head, his hair, eyebrows, eyes, lips and teeth are all painted and look exceptional. Black paint is used for his wrist tape and hand wrap, the latter of which can create a problem is you're not careful, though. Because the left hand wrap spills over on to his forearm, the entire joint is painted black as a result. My figure's left wrist was stuck due to the paint. I was able to work it free with a bit of twisting, but if you can bare to part with the figure for 30 minutes or so, toss him in the freezer before trying to work the wrist free. That'll keep you from tearing the peg. 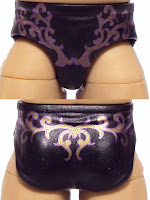 The crotch piece is molded in black since Regal wears black shorts and features a two-tone design on the front and back. They're intricate gold designs with a purple outline. The gold color is more prominent on the back design, but both are cleanly applied.

Regal also has a few tattoos on display. The first is on his left forearm, just below the elbow. It's a small flower with "CHRIS" printed above it. The detail of the flower is simple and stamped clearly, however the only coloring (green for the leaves around the flower) isn't aligned well and isn't as impressive as tattoo art seen on other Elite figures, inspite of being a very basic design. Regal also features tattoos on both his legs, below the knee and, coincidentally, below his knee pads.

His left leg features the words "MADE IN ENGLAND" in "old English" type, while his right leg is adorned with a British flag shaped like a shield and "Blackpool" printed a ribbon over the center. The "MADE IN.." tattoo is printed neatly and is faded just enough to look real. The Blackpool tattoo has a few different colors in it, but there is no blurring which is impressive given it's size.

Like the trunks, Regal's boots are molded in black plastic and later decorated with gold designs similar to those on his shorts. The swirling vines run down the boot and on to the foot portion, but keep in line all the way down. It can be tricky when a tampo runs across two pieces, but Mattel pulled it off nicely. 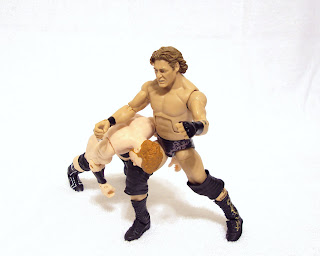 The knee pads included on William Regal are of special note, too. Although they look like the same large pads we've seen before, these are much more flexible. Mattel's finally done something about those thick, cumbersome pads everyone's complained about since the beginning. And the new pads aren't just a little more flexible, they're so flexible they let the knee joints move almost completely unobstructed. You can actually bend Regal's legs at the knees in perfect 90 degree angles and they'll hold that position. The only problem I have with these redesigned knee pads is that they weren't implemented sooner in the line. It took eight waves of figures to find a better material for the pads and oddly, Zack Ryder, who appears in the ninth wave, still utilizes the older, stiffer knee pad. I don't know how the pads on that wave's Kofi Kingston turned out, but I hope they're the same as Regal's.

William Regal may not be the flashiest Superstar or as popular as John Cean or The Miz, but he's a true workhorse in the WWE both on camera and backstage where he shares his wealth of knowledge with up and coming wrestlers, mentoring tomorrow's Superstars. I wouldn't mind adding an earlier version of Regal in his maroon ring attire to my collection, but I'm glad to have this version. It's a spot-on representation of Regal's current look and a solid figure all around.
Posted by 3B at 1:05 PM