And October is here. Where did September go? Well, I had time to rearrange my displays and you'll notice there are a lot more TransFormers on the shelves this month. Click ahead for a closer look!

Mattel's Masters of the Universe Classics had a great run on the Hive's displays this Summer, but this month they've been pushed out in favor of everyone's favorite transforming robots. Of course, I couldn't get rid of MotUC completely. At the very top of the display case are two of my favorite figures from the line: Battleground Teela and Battle Cat. 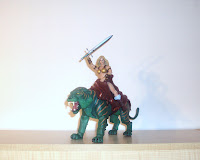 I like the imagery of a bikini-clad barbarian woman riding a giant green tiger. It's very Heavy Metal and always surprises guests at my home. She's holding up Vikor's sword because it's larger than her sword and adds to the epicness of the scene. I also had to show off Cat's fearsome face without his battle helmet. 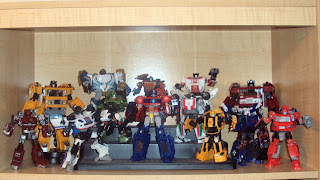 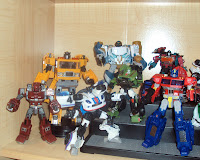 If you remember last month's display, the Autobots appeared in vehicle modes. The alt modes end up taking more space than the robot modes, so I had to leave Warpath and Sea Spray out. With the Autobots in robot mode this month, I was able to fit those two plus three more bots I picked up since last month: Ironhide, Red Alert & Inferno. This is pretty much the limit of Transformers I can fit on that shelf while keeping some of them in dynamic poses. That's not all bad because this is pretty much the extent of my G1 (first two seasons) collection. Most of the figures I'm missing cost more than I'm willing to pay, but I feel I've obtained my most wanted figures. 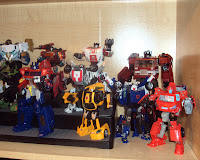 After getting Ironhide, Ratchet is an easy pass. The mold is mediocre, with the robot mode being the better of the two, but definitely not worth the huge markups sellers are listing them for on eBay. I really like the colors on the Henkei! versions better, but those are even more expensive. I was able to snag 'ol Ironhide for about $30 after shipping. I'm still on the hunt for a reasonably priced Grimlock and by "reasonably priced" I mean "less than $25". Aside from him, I would like to add either Prowl or Bluestreak, with the latter being my preference. 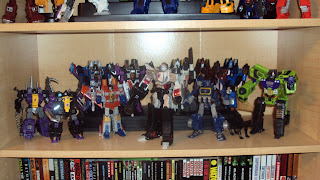 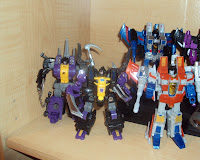 The Decepticons moved down below the Autobots this month, but haven't changed much. Or have they? There are two Insecticons now! FansProject's Stormbomb came in just last week. The second of three third party figures paying tribute to the original G1 Decepticon subgroup, we're only missing Backfiery (aka Kickback) who should be coming later this month. 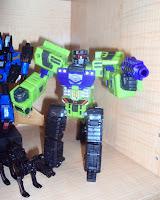 In the meantime, we'll have to wait for Repro Labels' upgrade kit for Stormbomb, Shrapnel's already rocking his and it turned out great! I opted to leave out the red knee and foot decals because I thought it threw off his color scheme too much. On the opposite side of the shelf, Scavenger (aka TFC's Exgraver) also received an upgrade from RL. Another great kit and well worth the price. TFC Toys' Hercules combiner already promises to be an awesome site, it will only be enhanced by the fine work being done by Repro Labels. I cannot wait!

Is it me, or have the 'Waves not received much love in the "Classics" lines? I'm cool with the Generations Soundwave, he's a nice figure with some neat G1 references in his build. But where the hell is Shockwave?! Are you telling me they haven't been able to deliver a new version of him since they started these Classics in 2006? I've been eyeing the Voyager class figure from Dark of the Moon and supposedly Toys R Us has a sale this week where you can feasibly buy him for $9.99. I'll have to look into that. Movie figures don't exactly mix with the non-movie stuff, but I think I can make an exception until someone produces an updated G1 Shockwave. 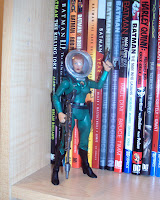 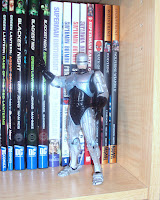 I've had Captain Glenn on display since she arrived in early August, but this is the first time she's wearing her full space explorer gear. She's a really cool figure and I've enjoyed her a lot. I haven't decided how she fits into my MotU mythos just yet, but she's definitely NOT He-Man's mom. Another recent addition is RoboCop from NECA's movie line. He's not the most poseable action figure, but he is the future of law enforcement. RoboCop is one of my, not just favorite sci-fi/action films, but all-time favorite films overall. I never owned the McFarlane figure, so I couldn't pass up on this one. Of course, I would have loved an alternate head without his helmet. Classic Murphy. 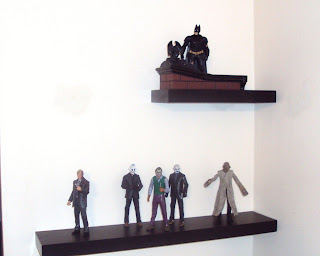 I went with a simple display on the wall this month. Some The Dark Knight goodness in anticipation of the new film next Summer. It's been three years already since the last film, hard to believe, but it still feels fresh in my mind. Anyone else eager for the new bat-flick? I know there's been a lot of leaked photos and videos, but I'm confident in Christopher Nolan's ability to craft a complex story. I just hope this isn't the voice Tom Hardy is seriously using in the film.

Until next time, keep your displays dust-free!
Posted by 3B at 11:15 AM