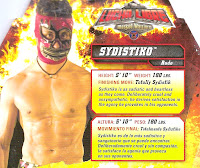 Happy Halloween! What better way to celebrate than with a review of a masked man?

Playmates' first (I believe) toyline of licensed wrestling figures, Lucha Libre USA: Masked Warriors hasn't received much love on the Hive, but that doesn't mean it isn't a really fun one. I've never watched an episode of the MTV show the figures are based on and that unfortunately means I have minimal motivation in collecting the line. When I first encountered these figures it was at Walmart, but since then they've expanded to other retailers including Toys R Us. There they take up much less space than WWE merchandise and just a bit smaller than Jakks' TNA stuff, but they seem to sell moderately well. Let's take a look at Sydistiko. 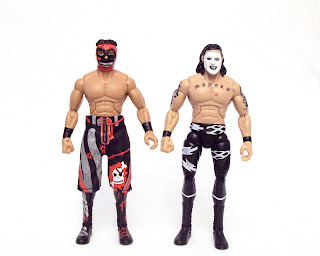 Back in January I reviewed my first LLUSA figure, Charly Malice, and thought he represented the line well enough to warrant another purchase. Sydistiko is basically the same figure as Malice with the addition of a new head and removable cloth shorts (and new decos, of course).

Sy's head features a sculpted mask, reminiscent of something the members of Slipknot would wear, with a zippered mouth to boot! The back of his head has laces for the mask, although they're painted black and don't standout much against his black hair. There is a lot going on paintwise on Sydistiko's mask; red, black, silver and his flesh tone all converge in a small space to enhance the sculpt of his mask. It's actually an impressive display on Playmates' part considering this line is mostly a "kid-friendly" toy line.

I wouldn't automatically call his shorts an accessory, since it's part of his ring attire, but Playmates opted to not sculpt the shorts and that resulted in Sydistiko being the only (I believe) figure with a clothing AND weapon accessory. The shorts are a papery nylon material and closing over the butt thanks to a small velcro square. 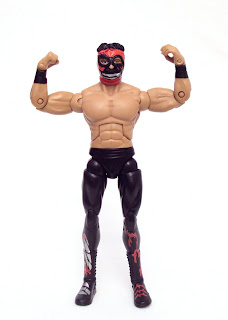 Because Sydistiko wears long shorts in-ring, Playmates didn't paint any details on his tights above the knees. The lower body is completely molded in black with some design work painted on his lower legs and boots. The stamping here is sharp using red and silver paint. Each leg features different designs, with the right leg having some scaly-looking silver and the left leg sporting some dripping blood apps. The designs runover to the feet and lineup well unless you move the feet around. 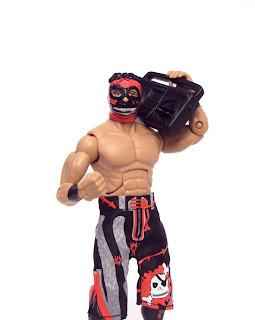 Sydistiko's true accessory is probably one of the coolest ever for a wrestling action figure: a boombox! You may be saying, "But 3B, boomboxes are completely outdated and impratical!" And to that I say, "Try assaulting your opponent with an iPod." 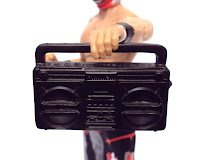 Yes, kiddies, before we could carry around entire music libraries that fit in our pockets and plug into small portable speakers loud enough for a day at the beach, the boombox was your only choice for cranking out the tunes away from home or your automobile. The weight added to one by the usually large alkaline batteries only enhances its desctructive power when swung at another grappler. It's one solid molded piece of plastic, but has plenty of little details sculpted on to it. In a perfect world, this figure would have included miniature casettes he could throw at opponents like ninja stars. Oh, yeah... "cassettes" are were the things you- nevermind.

The Lucha Libre USA figures offer lots of play options and are colorful enough to capture any kid's imagination, that's not something most of WWE's current roster of mostly dark-costumed Superstars can lay claim to. Playmates made sure to make these figures durable and perfectly articulated. The price is right, too! At $10 for the single carded figures, you have to admit they're a great value taking into account the addition of weapons. I enjoyed Sydistiko, but he was awarded to our Facebook follower, Travis G., as a runner-up prize to the Hive's contest last December. I had a chance a few months back to snag the entire series for $5 apiece when my local Walmart had them on clearance (due to remodeling, that WM NEVER puts anything on clearance), but decided to pass in favor of some cheaper DCUC figures. However, I still want a Tinieblas figure. That dude looks awesome! 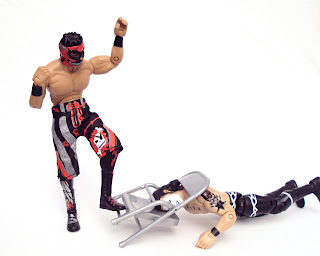