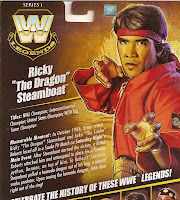 Before Mattel unleashed "The Dragon" in the WWE Defining Moments deluxe collector action figure line, they released a version of him in WWE Legends. Steamboat was part of the first wave of Legends and he's been floating around in my collection since Fall of 2010, but I hadn't had a chance to review him until now. Without further ado, here is the 1980s version of Ricky Steamboat! 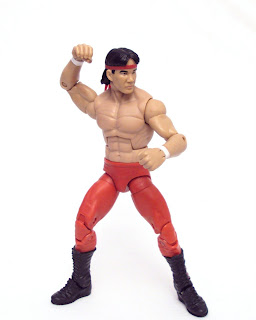 Ricky Steamboat may not have been the tallest wrestler, in fact at 5'10" he would probably be considered short for grappler, at least in the WWF, but he was a true physical specimen. He was in peak condition thanks to his love of body-building. This figure, just like the later Defining Moments version, utilizes the extremely toned, slim torso, also seen on Randy Orton and Rick Rude. To compensate for Ricky's lower stature, Mattel utilized smaller legs, making him shorter than other figures. Some might say he's too short, but it's not a precise science (apparently), so I can deal with it.

Conveniently for Mattel, Ricky Steamboat is alive and well, making him readily available for digital scanning, however, this figure captures his look from nearly 30 years ago! I don't know what process they use in these scenarios (reference photos maybe?), but they did well in capturing his look. His upper body is molded in his flesh color, while the lower body, except for the boots, is molded in the red color of his tights. 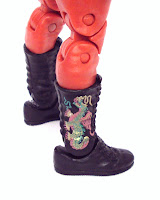 His headband and hair are painted in red and black, respectively, without any blurring or slop. Mattel added a bit of pink paint to his lips to help differentiate them from the rest of his skin. The only paint apps below the neck are his white wrist bands and dragon tampos on his boots. The dragons are clean on each boot, primarily green with gold and pink used to highlight the details such as the tongue, belly segments and smoke eminating from the nostrils. 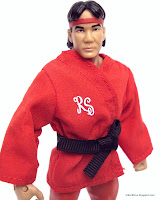 Ricky Steamboat includes a few accessories that includes his entrance attire. It's composed of two parts: the red keikogi and the black belt. There is no velcro fixture on the gi, you have to secure it with the belt just as you would a real life version. It's frustrating to get it tied, though. Maybe it's just my clumsy fingers, but it takes me a while to put it on the figure.

The other issue with the jacket is that it's dyed red and if you don't know by now, all of the red clothing accessories on these figures end up bleeding on to the figure, staining them permanently (wait 'til I get to that Kozlov review...). The design team has addressed this issue and promised to work on different materials and dyes that will not bleed. Other than that it's a nice jacket with Ricky's initials printed crisply over his right breast and a dragon matching the ones on his boots printed on a patch on the left sleeve.

Steamboat's other accessory is his pet "dragon" who is neatly muzzled with a red bandana matching Ricky's attire. The "dragon" figure is one solid molded piece with zero articulation and can be tricky getting into Ricky's hands, but not impossible. It's a cool pack-in, but I'm glad it wasn't his only accessory.

While there seems to be a lot of Legends figures from the early waves still floating around the pegs, I can't say I've seen too many "Dragons" out there. Some fans may prefer him in white tights to recreate his critically-acclaimed WrestleMania III match with "Legends" series 4's Randy Savage, but this one should please Steamboat fans just as well. And with that, we finish up our reviews for series 1 of WWE Legends. Kinda funny that Mattel used an image of Steamboat wearing the classic Intercontinental Championship belt on the package, yet didn't include one inside the package. Well, just for shits and giggles... 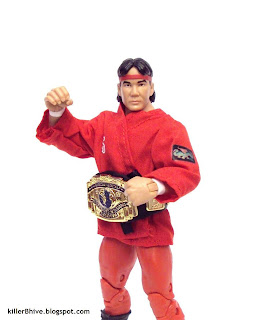