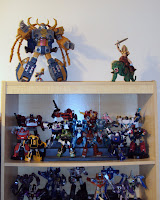 We're just a few days into November, but it seems will be chowing down on turkey and pumpkin pie soon and then the horror that is "BLACK FRIDAY" will once again be upon us. I haven't done ANY Christmas shopping, yet, and can't say I'm looking forward to it either. Just the thought of standing in long lines at the toy stores makes me cringe... Thankfully, while I'm home and can sit back and enjoy the toys on display this month.

I'm still going with a mainly TransFormers theme this month, but did a bit of rearranging, removed a few figures and added some that hadn't been displayed, yet. Ever since Unicron arrived, he's been hanging out on top of the display case, sharing space with BG Teela and Battle Cat. That's pretty much the only place I can display him, he'd just take too much space inside the case. 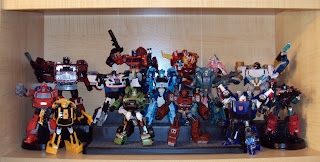 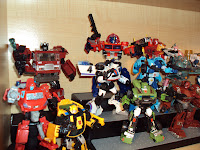 I pushed the Primes to the back because I wanted to show them off at the top "commanding" their troops into battle. Since I added Rodimus Prime this month, I also had to throw in some of his compatriots from season 3 of the original cartoon. Kup is his right-hand 'bot and I received the iGear head upgrade in time for this display. It looks 100% more like the IDW design of Kup now and if you have Generations Kup, you should certainly look into grabbing a set. At twelve bucks with free shipping, it's a great deal for a third party item. I recently placed an order at Big Bad Toy Store and picked up an extra Kup figure for $6, just so I can install the second head and have both ready for display. There is another company working on a similar upgrade for Blurr that will deliver a "G1" styled head, but no word on when it will be released. 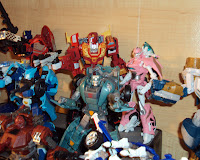 If there is another character as vital to Rodimus Prime as Kup, it's Arcee (okay, so Ultra Magnus would be right up there with those two, but I don't have him, yet...). She hasn't been represented in the "classics" lines and I did pick up the Impossible Toys "Valkyrie" figure to try and fill that gap, but it turned out to be a phenomenal plastic turd. Perfect Effect is currently working on a modernized version of Arcee with a motorcycle alt-mode. I don't know when that's coming out, but I was able to buy the TransFormers: Prime NYCC exclusive two-pack featuring Bumblebee and a G1 inspired deco of Arcee. It's not a perfect fit, but the figure is really cool and she doesn't look bad next to the classic TF figures. I couldn't get that Bumblebee into the display, but perhaps there will be enough TF: Prime figures on store shelves by late December to give us a full Prime display.

The Decepticons display received a makeover this time around, too. While Megatron, Soundwave and the original Seekers are still in there, I tossed in a couple of "2005" characters to match-up with the Autobot ranks and threw in a Pretender homage in the form of Thunderwing. Now that we have the complete Insecticon team available (thanks to FansProject), I had to put them on display together. And there's a "variant" display with the Insecticons in robot mode: 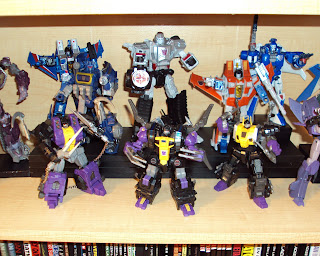 The total lack of a "classics" Shockwave influenced my decision to pick-up the Dark of the Moon version. That and a sale/coupon combination at Toys R Us a few weeks back that had him for about ten bucks! That's a great deal on a movie Voyager figure. He's not a perfect fit, but I can live with it until someone decides to produce a proper classic Shockwave.

The DotM stuff pushed the Generations line out of the way, but I hope Hasbro can get it back on shelves next year and continue producing some updated G1 characters and with the highly-anticipated Fall of Cybertron videogame coming next year, I don't think that will be a problem.

And finishing out the display for this month are "Armored" Batman from DC Direct's Arkham Asylum series and RoboCop, who was on display last month. I picked up Batman at Tate's Comics' annual Halloween sale last month and he turned out pretty cool. He was only 10% off from his usual $19.99 price tag, so I wouldn't call him a steal, but he is my first AA figure (from either DCD or Mattel) and he looks great.

And with that I hope you have enjoyed our (quasi-)monthly CoD feature. This will be the last edition until the new year as I am currently packing up to move. Yes, the most dreaded occasion for toy collectors: moving day. The Hive will be relocating in December and I have begun the logistical nightmare of sorting and packing everything in the house. I started early because I wanted to look through my collection and get rid of some "dead weight" to help make the move easier. I've already sold several non-essential items, which has been great in acquiring some new stuff and keeping a little extra dough in my wallet. In fact, it's inspired me to re-evaluate everything I've collected over the past decade or so and I'm strongly considering a huge purge in 2012, only keeping the items I'm most passionate about. The ultimate goal is to review and share these items on the Hive in one way or another before they go and I think the timing is especially poignant as next year I will be celebrating my 30th birthday and in many ways is a "milestone" year.

Anyway, dear readers, there is still plenty of content coming up on the Hive because I will do my best to keep posting until I have to unplug my computer and box up my router. So, stay tuned and remember to enter the Hive's Christmas Comes Early contest. Part 2 of the prize package will be revealed this upcoming week!
Posted by 3B at 10:30 AM