Last year I was happy to see more Golden Age JSA members make it into DCUC. The year it seems Mattel was holding out until the latest wave to release more of them. Wave 19 is composed of all JSA, or JSA-related figures, even the "collect & connect" figure, S.T.R.I.P.E. I'm mostly interested in the GA characters, though, so The Atom and Sandman were on my priority list. Let's see how they turned out.

Kicking the review off is the Atom, a.k.a. Al Pratt, feel free to read his bio if you need to catch up on just who he is. He may look like just an ordinary, run-of-the-mill DCUC figure, but upon closer inspection, you'll notice some vital differences. First up is his height, which is something even Mattel wasn't clear on whether he'd be the same height as other figures or significantly shorter. I'm happy to report that he is shorter than the average DCUC figure, but not comically shorter like he was in Batman: The Brave and the Bold. 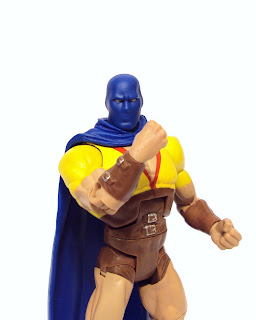 He reuses the bulkier upper body we've seen before, but utilizes a new ab piece that features sculpted straps and buckles, just like his forearms. His smaller stature is attributed to his legs, which I'm not sure if they were reused. The paint on my figure was crisp for the most part, the skin painted on his chest matches his arms and legs well. The brown paint on his costume does a great job of looking leather-like, I'm guessing that's what he was going for, considering the straps and buckles. 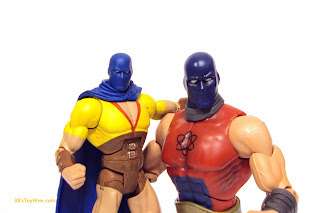 I really like The Atom's look overall, it's very pro-wrestlerish which is a reason I like the wave 7 C&C figure Atom-Smasher so much. Although the ultra-tight masks make you wonder how they can even breathe while wearing them. Unfortunately, Atom didn't include any accessories, I'm not sure what accessory he could even come with that would make sense for the character. He did include the head and lower torso pieces for S.T.R.I.P.E., who by-the-way, looks really cool and may force me to buy this entire wave eventually.

The Golden Age Sandman, a.k.a. Wesley Dodds, takes the concept of the boring old "just a guy in a business suit" costume and turns it on its head thanks to few interesting choices. Most interesting is his gas mask. It definitely evokes a retro future-tech look, the same kind of designs that inspired characters like The Rocketeer and that's something that always catches my eye. Also, the choice of suit color and the addition of a purple cape certainly make him stand-out in public venue. If Sandman's body seems familiar to you, it should... 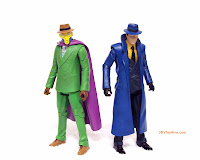 He's built on the Question's body from wave 11, but instead of the one piece jacket/coat combination, Sandman receives a new double-breasted jacket using the same soft plastic. It hinders some of his torso articulation, but seems more flexible than the pieces used for the Riddler in wave 5 and Two-Face in the "Gotham City 5" set. His cape is a bit lighter than the Atom's, probably because it's, ironically, shorter. Sandman's paint is well-done, too, the only issue I found was a bit of blurring where the yellow on his mask meets the blue area, but it was very minimal. The pinstripes on his tie are clean, which is nice since they're two-tone. Like the Atom, Sandman uses some brown paint to create a leathery look on a couple of his costume elements, specificially the gloves and shoes. 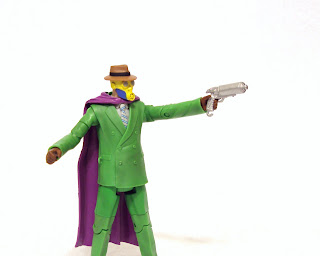 Sandman has a leg up over the Atom in the accessory department. He comes with his trademark gas gun. It's molded in one piece with a nice silvery finish. The sculpting is nice and makes it look like a revolver stuffed into a can of hairspray, barrel first. There's a small hook on the bottom of the handle so you can hang the gun off of a loop on Sandman's coat. I didn't notice the loop in package because it was flattened against the body, something which created stress marks in the thin plastic. I try not to mess with it too much for fear of breaking the loop off. 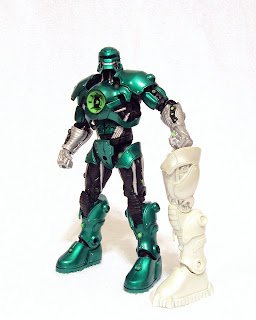 Back when the C&C figure for Green Lantern Classics wave 2 was revealed Mattel mentioned the reason for Stel being over-sized was to accomodate reuse for a future C&C. That future release is this wave's C&C figure, S.T.R.I.P.E. Obviously, he has a new head, and I only have a leg to compare with Stel, but I can see that while Stel's served as a base, there are plenty of added details to make it look different enough. His exaggerated height aside, Stel was one of my favorite action figures this year, so I'm curious to have a completed S.T.R.I.P.E. figure now. It's a tough time to be an action figure collector because there are so many things coming out, there just isn't enough money for all of it. However, I'm going to try to fit this wave into the budget over next couple of months because that C&C looks nice! 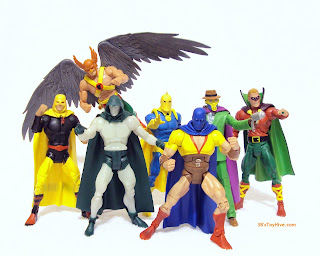 I'm really pleased with both the Atom and Sandman and glad they turned out better than Alan Scott and his hideous head sculpt. I wasn't planning on adding the GA Hawkman because I have the wave 6 version and he can slide by if he has to, but since I decided to complete the C&C for the wave, I'll end up getting him anyway. It really seems the only JSA'er missing now is Jay Garrick and I know he's coming next year in the Club Infinite Earths exclusive line, but the anticipation is driving me insane!

I snagged these two guys off of Amazon.com for $14.99 each and free shipping. That's about a good a deal as you'll find, unless they make it into stores during a Christmas sale. I believe Target has a deal on DCUC figures going on right now, but I haven't had time to check. Happy hunting!
Posted by 3B at 12:40 PM